‘We are not animals’: Refugees caught between Turkey and Greece have nowhere to turn

‘We are not animals’: Refugees caught between Turkey and Greece have nowhere to turn 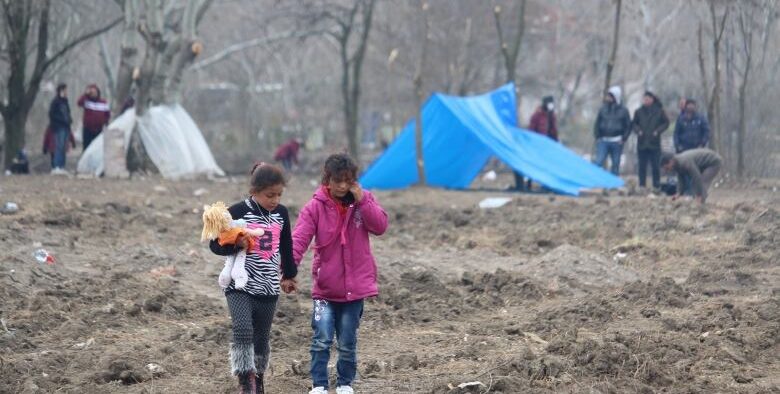 He was crowded with others who’d flocked to Turkey’s northern border with Greece after Turkey’s President Recep Tayyip Erdogan said he would open the frontier.

Gazel said Turkish police had even directed him where to cross. But he was stopped by Greek border police, then beaten and sent back to Turkey, he said.

“They took our bags and they forced us to take off our shoes and they hit us with batons.”

That’s why he finds himself sleeping rough in a park on the edge of the Turkish city of Edirne, about six kilometres from the border.

But when he says he’s tired he’s not talking about this recent journey. He’s talking about six years growing up as a refugee in Turkey.

He fled Syria’s war with his older brother at the age of 12, after they’d lost their parents. “We don’t want any money from Europe or anybody. We just want a life. We’re human beings,” he said. “We’re not animals.”

Shuaa al Abdullah and her family are Syrian refugees trying to stay warm as they settle in for a long night in Edirne, near Turkey’s border with Greece. 0:32

An older man in an overcoat stands beside him with red eyes, blinking back tears. Somewhere along the way he’s lost his dignity and he knows it.

President Erdogan’s invitation to migrants to make their way to Europe via Turkey’s border crossings into Greece is widely seen as provocation aimed at the European Union for failing to do more to help Turkey cope with nearly four million Syrian refugees. But for the people who made their way to the border, already heaped in misery, it was a cruelty.

There’s a Syrian woman huddled under a tree with a fire lit to warm her two children through the night as they sleep on the ground. She asks if the border is really closed.

And there is an Iraqi family sitting on the ground next to a wheelchair, with their teenage daughter shrouded in blankets beside them. She has cerebral palsy. They came in the hopes of seeking better medical care somewhere in Europe.

All the while, Greece and Turkey have been lobbing insults and tear gas across the border.

Turkey’s interior minister, Suleyman Soylo, announced he’ll deploy 1,000 special officers along the border with Greece. Asked if Turkey shouldn’t advise the migrants not to cross given Ankara’s claim that Greece is firing on them, he insisted Greece doesn’t have the right to turn people back.

“Greece cannot do this,” he said. “Human rights organizations should handle the situation. The European Union refugee agency keeps silent.”

Greece has accused Turkey of spreading lies about its border police and how they’re treating refugees. But it’s clear there is some brutal message-sending going on.

Payanda Nazari, 28, tells a tale similar to that of Ibrahim Gazel. Nazari tried to cross the river into Greece near the sleepy village of Doyran on Thursday night.

“[The Greek border guards] asked ‘Where are you from?’ We told them Afghanistan and they [took] our shoes. Our pants. Our everything. Money, ID cards. We have nothing.”

Nazari speaks English he says he learned on a U.S. base in Afghanistan. He said his father, who made the crossing with him, was injured and taken to hospital.

Workers from a Turkish NGO called The Lighthouse Association confirmed that some people were being stripped of their belongings by Greek police and sent back over the border, many of them just in their underwear.

“If the European Union supported Turkey after all this situation, I guess this crisis wouldn’t be happening now,” said aid worker Ali Duman, handing out shoes and jackets to a group of asylum seekers outside the town’s mosque.

“This is like a chain reaction. What’s happening in Idlib is affecting Turkey. And now it’s starting to affect Europe as well.”

Bashar al-Assad’s Syrian regime has been engaged in a brutal offensive backed by Russia against the last remaining rebel enclave in the country.

More than a million people have been displaced from their homes since December, many camped out along the Turkish border.

Erdogan fears another massive influx of refugees, part of the reason he pushed so hard for a Russian-sponsored ceasefire in Idlib this past week and issued his ultimatums to the European Union.

Greece says it has repelled some 35,000 migrants trying to cross over from Turkey in recent days. Pawns in a much larger game, their fate remains uncertain. The camp where Gazel was sleeping earlier this week has since been completely cleared of people.

Margaret Evans is a correspondent based in the CBC News London bureau. A veteran conflict reporter, Evans has covered civil wars and strife in Angola, Chad and Sudan, as well as the myriad battlefields of the Middle East.

Greece is good, but Turkey is better
NAT 10th January 2020

Greece continues to push asylum seekers back to Turkey