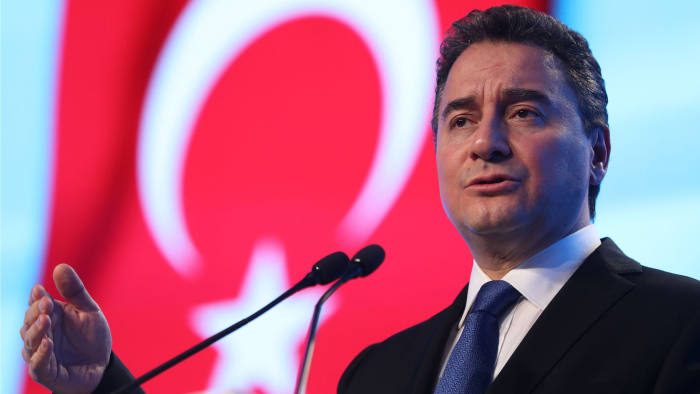 Turkey is being run like an “island state” managed by a tiny circle of people, Recep Tayyip Erdogan’s former deputy prime minister has warned after he launched a new party aimed at challenging the Turkish president.

Ali Babacan, who served under Mr Erdogan in successive governments until 2015, said the country of 83m had been suffering a serious “human resources problem” in recent years as talented people had quit or been forced out.

Though he refrained from directly criticising the Turkish president by name, Mr Babacan said the issue “starts from the very top” and runs down into party and government ranks. “The decision-shaping and decision making has become so centralised,” he said in an interview with the Financial Times, adding that it was restricted to “a small circle” of people. “Turkey is a large country . . . It is not an island state which can be run from one centre,” he added.

Mr Babacan was a founding member of Mr Erdogan’s Justice and Development party (AKP), which has dominated Turkey’s politics since 2002. But he was one of a number of party veterans who have become uncomfortable as Mr Erdogan’s leadership style has grown increasingly authoritarian and personalised — a trend that was cemented in 2018 when he took to the helm of a powerful new presidential system and placed his son-in-law in charge of the Turkish economy.

Mr Babacan, who is best-known for his role as the steward of the Turkish economy at a time of vigorous growth and rising prosperity, left government in 2015 and three years later stood down as a member of parliament.

Last week he launched his Deva party, heralding the second serious rift in the AKP in a matter of months. Ahmet Davutoglu, a former prime minister, founded his own breakaway movement in December.  Mr Babacan said he and the co-founders of Deva — whose name means “remedy” in Turkish — felt a “moral responsibility” to take action. “It is time to be brave for the future of the country,” he said. “Otherwise we are going to live with a huge regret until the end of our lives, thinking that we could have done something but we didn’t.”

Mr Babacan said Deva would be a centrist party that would aim to appeal to “quite a wide range of segments of society”. It is time to be brave for the future of the country Ali Babacan While some political analysts are sceptical about the party’s ability to attract a large vote share, they say its danger to Mr Erdogan lies in its potential to peel off AKP supporters.

The Turkish president must secure at least 50 per cent of the national vote to remain in power. In the most recent presidential election, in 2018, he won with 52.6 per cent.  Many analysts argue that the only way for opposition parties to topple Mr Erdogan is to work together, as they did during the 2019 local elections that saw the AKP lose control of a string of important cities. Mr Babacan said he had held “dialogue” with other parties but argued that it was “too early” to talk about co-operation.

Turkey’s next presidential and parliamentary elections are not scheduled until 2023. While conceding that it would be difficult for opposition parties to trigger early elections, Mr Babacan said future political or economic developments — including the collapse of Mr Erdogan’s alliance with an ultranationalist party — could force the Turkish president to call an early vote.

Mr Babacan admitted that the path ahead would be difficult. He said some supporters, especially those in the business community, had been reluctant to back him publicly due to “all kinds of fear” about the ramifications. Reaching voters would be difficult given the lack of media freedom, he said, adding that his party would seek to use social media to target technology-savvy voters while also building a “huge network across the country” to forge contact with others who are harder to reach.  Critics of Mr Babacan say he is tainted by his many years of being associated with the ruling party.

The former financier said he “cannot escape from the shared responsibility” of his time in government, but said that he stood by everything he had said in public. He said he did not regret his final three years as an MP for the party, from 2015 to 2018, but described that time as “painful”.

Asked if he believed it was still possible for a democratic transition of power to take place in the country, Mr Babacan said: “Turkish democracy is sick but it is not dead yet.