As Coronavirus Cases Spike in Turkey, So Does anti-Semitism

As Coronavirus Cases Spike in Turkey, So Does anti-Semitism

Last week, Turkey joined the long list of countries registering citizens affected with COVID-19, with the current total of infections standing at 47. But there are widespread fears that the “silent” infection rate is far more widespread.

The novel coronavirus reached Turkey rather late; even early last week, there were still jokes circulating on Twitter about its tardiness reaching the country, despite massive breakouts in neighboring Iran, Iraq, and Greece and the regular exchange of visitors coming and going from Europe to Istanbul.

Many comically speculated that this was due to the Turkish habit of greeting visitors with a dash of kolonya – a scented alcohol-based liquid that its fans say works like hand sanitizer. Others commented on how many Turkish people are borderline germaphobes, and keep their homes immaculately clean; I can bear witness that some Turkish families wash their curtains at least once a month, and even iron their underwear.

And Turkey ranks right at the top of the table of European states for washing hands after using the bathroom, reaching an impressive 94 percent of the population (by comparison, Italy scored an appallingly low 57 percent).

However, as news of the virus reaching its borders spread, the jokes on Twitter lost their appeal. In no time at all, the humor was replaced with hate. Conspiracy theories began to spread like wildfire, even quicker than the virus itself. And, not surprisingly, topping the list, were those who masterminded this worldwide pandemic: The Jews.

The language could have been taken straight out of that infamous but endlessly influential Czarist forgery, The Protocols of the Elders of Zion. The Jews are behind the global catastrophe, spreading sickness in an attempt to take over the worldwhile, as a bonus, profiteering from others’ suffering through their control of major pharmaceutical companies.

Certainly, anti-Semitic conspiracy theories positing Jews’ plans for global dominance are not unique to Turkey, nor even are the claims that Jews or “Zionists” are behind the novel coronavirus: it’s a global phenomenon.

Erdogan Faces His Biggest Test of the Pandemic: The Economy
NAT 9th May 2020

Erdogan Faces His Biggest Test of the Pandemic: The Economy 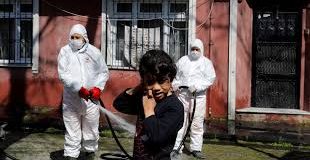