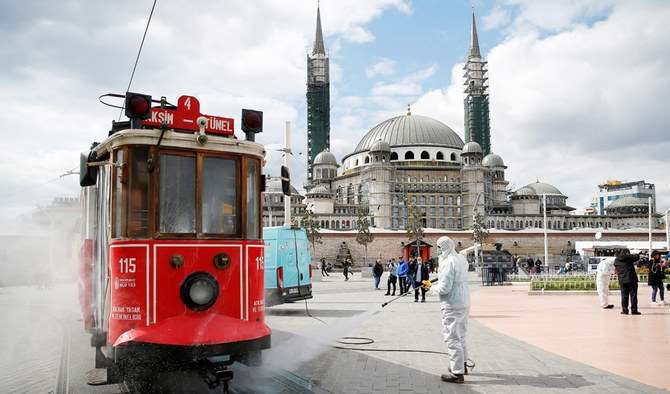 A municipality worker sprays disinfectant over a tram to prevent the spread of coronavirus in central Istanbul.

ANKARA: As official figures report increasing rates of deaths and confirmed cases linked to the coronavirus, the Turkish government has announced a new package intended to tackle the economic effects of the unprecedented outbreak.

The package, named Turkey’s Economic Stability Shield Package, is worth 100 billion liras ($15.3 billion). It includes provisions for the rescheduling of tax duties, loans and social insurance payments, along with some incentives for Turkish businesses in the country’s $750 billion economy.

In order to stimulate credit expansion, the Credit Guarantee Fund limit has been increased to 50 billion liras from 25 billion liras. The value-added tax on airlines was decreased to 1 percent from 18 percent. Tradesmen’s loans held by the state-run Halkbank were delayed for three months.

The measures come at a time when Turkish citizens are advised to stay home as a precaution to curb the spread of the virus.

Economists have criticized the multibillion-euro package in response to the expected slowdown, however, finding it unrealistic considering the extent and speed with which the pandemic is spreading.

Many bankruptcies and payment defaults are expected in Turkey, especially among small and medium-sized enterprises, which could trigger mass unemployment.

Shopping malls throughout the country have recorded a 70 percent decrease in sales over the past week.

Oner Guncavdi, professor of economics at Istanbul Technical University, said that the package does not meet the needs of ordinary citizens.

“It instead helps employers in recovering from this crisis,” he told Arab News.

“The package may also increase the debt burden because Turkey currently has no financial capabilities to finance this package.”

Turkey’s unemployment rate reached 13.7 percent in 2019 with a 2.7 percentage point rise from the previous year, mainly because of the recession, the state-run statistical body announced on Friday.

There is a need to ensure income transfer and direct cash injection to households to support demand. Infrastructure megaprojects are no longer needed because there is now an urgent need for public spending in the health sector.

COVID-19 is also expected to weigh down economic growth for the rest of 2020 in Turkey. A growth rate of 5.1 percent is expected for the last quarter of 2019 and 0.6 percent for the overall year.

Guncavdi expects a serious rise in unemployment within two months, which would have dramatic repercussions as the shrinkage in economic activity leads to a decrease in domestic demand.

“There is a need to ensure income transfer and direct cash injection to households to support demand. Infrastructure megaprojects are no longer needed because there is now an urgent need for public spending in the health sector,” he said.

Some analysts also draw attention to the possible financial problems that Turkey’s newly built Istanbul airport and its operating consortium could face following the corona outbreak, which has negatively impacted the tourism and transport sectors.

Credit rating agency Moody’s has recently downgraded its forecast for the growth of the Turkish economy in 2020 to 2.5 percent.

According to economist Cuneyt Akman, the coronavirus pandemic caught the Turkish economy at a very bad time as the country is already indebted and its financial resources are especially weak after the 2018 currency crisis.

“This economic stimulus package is employer-friendly. Currently, ordinary citizens don’t intend to buy cheap houses or take a cheap holiday ticket, because everybody stays at home. Such incentives are not rational in light of the dynamics on the ground,” Akman told Arab News.

Akman anticipates a wave of dismissal in the following months, which would hit low-income households first.

“During recession periods, employers first prefer to dismiss their workers. If such a practice expands, people will begin feeling unsafe and will avoid spending any money, which would trigger wide-ranging effects. Maybe this will be an occasion to initiate structural reforms in the economy,” he said.

As the spread of coronavirus continues to crush tourism and hospitality, the two sectors will not be able to support the economy this year. Export-based sectors are also expected to shrink.