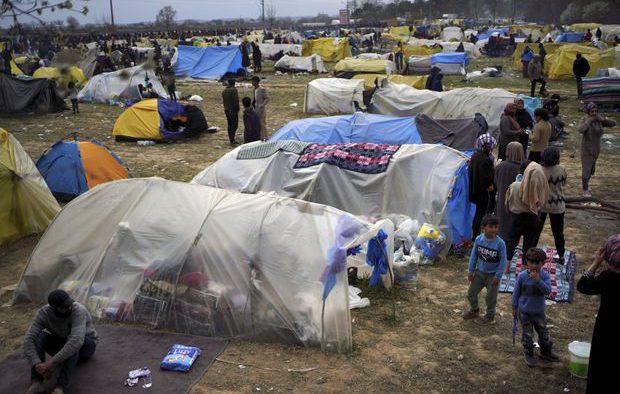 Turkish authorities have evacuated thousands of migrants who had been waiting at the border with Greece hoping to make their way into Europe, as a precaution amid the coronavirus pandemic, Turkey’s interior minister said Friday.

Thousands of migrants had massed at a border crossing with European Union-member Greece after Turkish President Recep Tayyip Erdogan announced last month that his country would no longer prevent refugees and other migrants wanting to travel to EU countries.

Violent clashes erupted between the migrants and Greek border authorities trying to push them back.

Interior Minister Suleyman Soylu told private NTV television that some 5,800 migrants waiting at the border crossing in Edirne province were moved away from the border area overnight and taken to migration centres in nine provinces.

Soylu warned, however, that the move did not amount to a change in policy and that the migrants would be free to return once the pandemic is over.

“When this epidemic is over we would not prevent whoever wants to leave,” he said.

Earlier, the state-run Anadolu Agency said migrants staying in a makeshift camp near the border gate were moved in buses to state guest houses where they would be quarantined. They would be moved to other regions in Turkey at the end of the quarantine, the agency reported.

Turkey has so far reported 75 deaths related to the new coronavirus and 3,629 infections. It was not clear if any of the migrants at the border had contracted the virus.

The Edirne governor’s office did not return calls.

Greece hailed the development as an “important thing for our country and for Europe,” praising Greek authorities’ ability to guard its land and sea borders.

Prime Minister Kyriakos Mitsotakis, speaking during a teleconference with ministers on the situation at the border, said Greek authorities had “ascertained that the makeshift camp which had been created … appears to have been dismantled and those who were on the Evros border have been moved away.”

Greek authorities also shared a nighttime video of a fire in a wooded area, which they said was Turkish authorities burning the tents left behind by the departing migrants.

“A chapter might potentially be closing, but this battle, have no doubt, continues,” Mitsotakis told the ministers, according to a statement released by his office. “We managed to secure a very important thing for our country and for Europe. The ability and efficiency of guarding our land and sea borders.”

A Turkish journalist based in Edirne said several buses were seen leaving the border area and that authorities later disinfected an area where the migrants had been camping.

Anadolu said some of the migrants asked to be moved, while others had to be convinced.

Turkey declared its borders open for migrants to cross into Europe following months of threats by Erdogan that he would allow millions of refugees into Europe unless the EU provided more support for the more than 3.5 million Syrian refugees in Turkey.

Source: The Globe an Mail