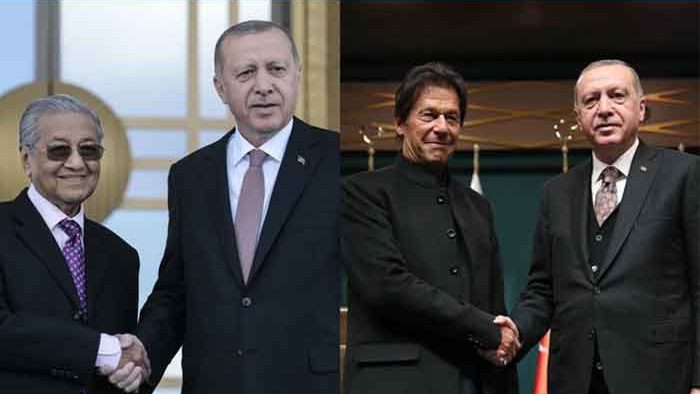 This emergent alliance is a reflection of a shift in power in the Islamic world away from its traditional Arab center.

The name of fugitive Indian Salafi Islamist preacher Zakir Naik is little known in the West. Naik, founder of the Mumbai-based Islamic Research Foundation, is currently being pursued by the Indian authorities on charges of money laundering and hate speech.

Naik is a popular Islamist preacher in his native country. He has been referred to as “perhaps the most influential Salafi ideologue in India” and “the world’s leading Salafi evangelist.” His views on subjects such as homosexuality, apostasy and the Jews are as might be expected (the first two deserve the death penalty, the third “control America”).

The Indian authorities note evidence that two of the seven terrorists who carried out a deadly attack at a café in Dhaka, Bangladesh, on July 1, 2016, claimed inspiration from his teachings.

In himself, the fugitive preacher is of only passing interest. Naik’s activities are worthy of further note, however, because the list of his supporters and their activities on his behalf cast light on an emergent nexus in the Islamic world deserving of greater attention. This crystallizing alliance looks set to be of considerable consequence in the period opening up, not least for Israel and some of its partners in the region and beyond.

Fleeing from the Indian authorities, Naik has been the lucky recipient of permanent resident status in Malaysia. There, his case has become something of a cause célèbre. The Malaysian Islamic Party, which has four ministers in the current government, is vociferously opposed to acceding to Indian calls for his extradition.

Reports in a number of Indian media outlets claim that the (unusual) granting of permanent residency to the fugitive preacher came as a result of a request from the government of Pakistan. The reports further suggest that “Pakistan is also using its relations with… Turkey and Qatar to provide funding to Zakir Naik.”

Naik, for his part, has offered fulsome praise for Turkish President Recep Tayyip Erdogan. Speaking to an Islamist group, headed by Bilal Erdogan, in 2017, the Indian preacher referred to the Turkish leader as “one of the few Muslim leaders who has the guts to support Islam openly,” adding: “Oh Muslim world, wake up…. May Erdogan be the next leader of the Muslim world.”

THE DISPUTE around Naik casts light on the currently burgeoning relations between three significant Muslim countries – Turkey, Pakistan and Malaysia. This emergent alliance is a reflection of a shift in power in the Islamic world away from its traditional Arab center.

Ankara, Islamabad and Kuala Lumpur, with Qatar as an additional partner, today constitute an emergent power nexus, built around a common orientation toward a conservative, Sunni political Islam. This nexus is united as much by common enmities as by common affections. Its enemies, are India, Israel and (at the rhetorical level) the Christian West.

Its rivals within the diplomacy of the Islamic world, meanwhile, are Saudi Arabia, which has traditionally dominated the Organization of the Islamic Conference, the main pan-Islamic diplomatic body, and the UAE.

The crystallization of this new alliance has been apparent for some time. In late September 2019, Erdogan, Malaysian prime minister Mahathir Mohamad and Pakistani Prime Minister Imran Khan met at the sidelines of the 74th United Nations General Assembly in New York. The three agreed at that meeting to establish an English-language TV channel to combat ‘Islamophobia’ in the West.

Mahathir then sought to convene a summit in Kuala Lumpur, in December 2019, to identify, according to a press release announcing the summit, “what has gone wrong – with a view to eventually reclaiming the Muslim world’s fame and glory of yore.” Briefing the media in Putrajaya, Malaysia, on the summit, Mahathir suggested that “maybe, it can be regarded as the first step towards rebuilding the great Muslim civilization.”

The countries invited to the Kuala Lumpur summit were Turkey, Pakistan, Qatar and Indonesia. Mahathir described the invited countries as “a few people who have the same perception of Islam and the problems faced by Muslims.”

Subsequent Saudi pressure on Pakistan prevented its attendance at the KL summit. The joint diplomatic activities of the countries invited, however, have continued apace. So far, these efforts have largely been directed at India, with the focus on the issue of the disputed territory of Kashmir.

Kashmir appears to be a matter of particular interest to the Turkish president, in his effort to cast himself as a pan-Islamic leader, and in his desire to draw closer to Pakistan.

Turkey held an international conference on the subject on November 21, 2019. A Pakistani senator, Sherry Rehmen, participated in this gathering. During Erdogan’s visit to Pakistan in early 2020, the Turkish president mentioned Kashmir six times during a 25-minute speech to a joint session of the Pakistani parliament.

Erdogan likened Kashmir to the Turkish struggle for Gallipoli against the British and French in World War I. “It was Canakkale yesterday, and it is Kashmir today. There is no difference,” he asserted, in remarks that led India to issue a formal démarche to the Turkish ambassador in New Delhi, against interference in its internal affairs.

Malaysia also adopted a new and vociferously critical tone on the issue. Mahathir, shortly before his resignation in late 2019, said that India had “invaded and occupied” Kashmir and was “taking action to deprive some Muslims of their citizenship.”

It is worth noting that by contrast to this diplomatic activism, Saudi Arabia and the UAE maintain that Kashmir remains an internal Indian matter.

This reflects the growing closeness between Riyadh and New Delhi, expressed also in the major investments in India announced by Crown Prince Mohammed bin Salman during his visit to India in 2019.

The emergent alliance between Turkey, Pakistan, Malaysia and Qatar makes both strategic and ideological sense from the point of view of its members.

It reflects the repositioning currently under way across Asia, in the wake of the receding post-Cold War US hegemony. These countries are united by a similar core outlook, and have some common emergent adversaries.

Turkey and Qatar, indeed, have been engaged in a de facto partnership over the last decade, based on common opposition to Saudi Arabia and the UAE. They are also united in support for Sunni political Islam across the region in its Muslim Brotherhood form, and not least in its Palestinian iteration – the Hamas movement. Pakistan and Malaysia are natural recruits for this emergent bloc. India appears currently to be its main diplomatic target.

This alliance also shares a deep enmity to the Jewish state. Its adversaries – India and the UAE – are Jerusalem’s emergent strategic partners. Zakir Naik, nestled in Malaysia, with Qatari bank accounts and the diplomatic muscle of Pakistan and Turkey guarding him, breathing fire and brimstone against apostates, homosexuals and Jews, is its appropriate symbol.

By: JONATHAN SPYER
The writer is director of the Middle East Center for Reporting and Analysis and a research fellow at the Middle East Forum and the Jerusalem Institute for Strategy and Security. He is the author of Days of the Fall: A Reporter’s Journey in the Syria and Iraq Wars.
Source: Jerusalem Post
Tags:
Previous Article
A new Gaza: Turkey’s border policy in northern Syria
Next Article
Syrian Kurds call for investigation into kidnapping of women in Afrin