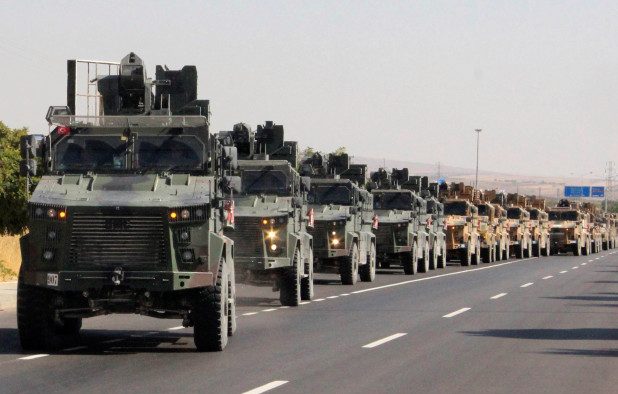 The Independent employs reporters around the world to bring you truly independent journalism. To support us, please consider a contribution.

Shrapnel of the troubled relationship between the civilian-turned-general Turkish President Recep Tayyip Erdogan and his military have shattered many countries in the Middle East. The failed military coup of July 2016 re-energised the most dangerous of Erdogan’s obsessions – the fear that he will be pushed out of power by the military.

The massive purge in the army’s ranks following the failed putsch was aimed at repositioning the army’s role in Turkish political life, and in doing so, neutering it as a threat to the presidency. Having cleaned up the forces from all followers of Fethullah Gulen and his other opponents, Erdogan is now on a mission to reshape the military in his own image.

In recent years, the Turkish president has allowed Islamist allies of his Justice and Development Party (AKP) to tighten their grip on critical military posts. The purge was not only a process of sidelining officers with different political leanings but an attempt to Islamise the army too.

The intensity of this military-civil mutual fear has helped to form Turkey’s expansionism abroad based on its military might. This is very obvious in the ongoing Libyan civil war, where Turkey’s military support of the Tripoli government, against general Khalifa Haftar, has altered the war balance.

Early on Wednesday, Ankara launched land operation Claw-Tiger against the strongholds of the insurgent Kurdistan Worker’s Party (PKK) in Northern Iraq – seen by many as an invasion of Turkey’s neighbouring country.

This is Erdogan’s third major military incursion outside Turkey against the Kurds alone since 2016. Only one month after the failed putsch, Erdogan ordered his troops to cross the Syrian borders as part of Operation Euphrates Shield, to push Isis fighters out of Kurdish towns and take them. In 2018, he ordered the Olive Branch blitz against the US-backed YPG Kurdish forces who played a central role in wiping out Isis from Northern Syria. That was followed by another operation in Idlib earlier this year, to prevent the Syrian regime from recapturing the city.

In addition, Erdogan has sent military advisors and mercenaries to Libya, established military bases Afghanistan, Qatar and Somalia, and still vying for military outposts in Sudan and Tunisia. The president is effectively overseeing the largest Turkish military posture abroad since the Ottoman era.

Pushing the military into conflicts abroad has multiple advantages for Erdogan. Firstly, it allows him to keep an iron grip on his forces and you could make the argument that this stifling of a sense of independence would make those in the military think twice before going against their president.

It also means he strengthen his position in relation to the the international community by bolstering the strongman image he is so fond of. The same can be said domestically, he will look strong to voters – not that he has to worry about an election before 2023.

The Turkish military is also on the verge of the biggest cultural change since Mustafa Kemal Ataturk. The recent incursions in Syria highlighted the rise of generals who don’t believe that staying aligned with the US and Nato is in Turkey’s best interests. Instead, many of Turkey’s analysts confirm that those who want deeper military cooperation and more arms deals with Russia have taken full control in the army’s decision making. This has been obvious in Erdogan’s cajoling of Putin after Turkish pilots shot down a Su-24 Russian bomber in 2015 on the borders with Syria, crushing the US-backed Kurds, and the generals’ push to purchase the Russian S-400 air defence system despite a repeated outcry from the west.

Challenging the US has become an act of heroism among the senior Turkish generals – and a way to satisfy their commander in chief.

This is also the least secular army since the foundation of the republic. New Islamist ascendents are actively transforming the military’s role as the pillar of secularism in an Islamic country. They are also doing Erdogan a great service by placing Islamist militias and armed groups aligned with Turkey at the centre of any conflict, guaranteeing them a seat at the table of any political resolution and helping to harvest long-term loyalties towards Turkey in the regions most turbulent areas.

As many will have already been convinced, Erdogan’s strategic goal is to transform Turkey and the Middle East. This goal might take some time for him to achieve. But the imminent danger Turkey faces is seeing the military being reconstructed in Erdogan’s own image – and becoming an instrument of authoritarianism, revisionism and extremism as a result.

Previous Article
Erdogan suffers from syndrome of delusional grandeur
Next Article
Why is Turkey the key to unlocking a NATO-EU naval operation?

Why is Turkey the key to unlocking a NATO-EU naval operation?
NAT 20th June 2020
Submit an Op-Ed
Tweets by NewsAboutTurke1