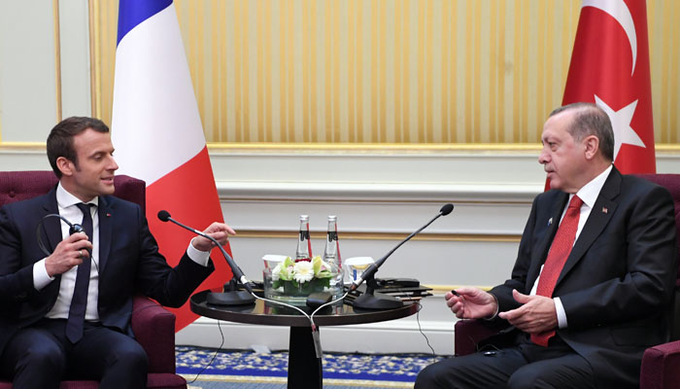 On June 18, 2020, NATO Secretary-General Jens Stoltenberg announced the alliance is opening an investigation prompted by France’s allegation that one of its naval frigates was targeted for attack by a Turkish naval warship in the Mediterranean as the frigate sought to interdict a civilian Turkish vessel suspected of transporting weapons to Libya. Although Turkey denies the allegation, the incident represents a new escalation in the rising tensions between Turkey and France already inflamed by France’s increasing naval cooperation with Cyprus. Following the recent success of Turkey’s military intervention to preserve Libya’s Government of National Accord, Ankara reportedly plans to establish an air base and a naval base in the country. Reorienting the strategic architecture of the region more in Turkey’s favor, the two Libyan bases will greatly boost Turkey’s engagement with the nations of North Africa and the Sahel. Facing a potential loss of influence in Africa, France may choose to align more deeply with Turkey’s rivals in Libya.

BACKGROUND: The early June encounter between the French naval frigate Le Courbet and Turkish warships escorting a civilian Turkish cargo vessel headed for Libya was described by French defense minister Florence Parly as “an extremely aggressive act,” in her testimony before France’s Senate. Parly testified that the Courbet, operating in the Mediterranean as part of NATO’s ongoing Sea Guardian mission, was “lit” by the targeting radar of the Turkish naval escort. A warning sign of imminent attack, the Courbet was forced to desist from interdicting the Turkish vessel suspected of transporting weapons in contravention to the UN arms embargo on Libya.

Turkey’s military assistance to the Government of National Accord (GNA) has enabled the Tripoli-based government to turn the tide of the civil war and capture territory held by the Libyan National Army (LNA) forces commanded by Field Marshal Khalifa Haftar, who has received covert support from France in addition to substantial support from Egypt, the United Arab Emirates (UAE), and Russia.  Following the Courbet incident, France’s foreign minister Jean-Yves Le Drian condemnedTurkey’s “growing military support” claiming it to be “in direct violation of the United Nations embargo.”

Tensions between France and Turkey began to reach a new level in 2018 when France started increasing its involvement in the Eastern Mediterranean as a result of French energy giant Total partnering with ENI in all seven Cypriot licensing blocks in which the Italian company is conducting exploration and production operations for offshore natural gas.

Total’s partnering with ENI made the plan to market the region’s gas to the EU exclusively through Egypt’s LNG plants more secure while Total’s new key role in Eastern Mediterranean gas firmly anchored France’s interests to Cyprus and Egypt and in opposition to Turkey. France’s expanded presence in the Eastern Mediterranean has caused consternation in Ankara. Turkey regards French involvement in Eastern Mediterranean energy as unwarranted meddling near Turkey’s shores and as push-back in the wider Franco-Turkish geopolitical competition as Turkey expands its influence in the former Ottoman regions of North Africa as well as the Sahel, regions where France has long been the most influential foreign power.

Turkey views France’s expansion of its security partnerships with Turkey’s Middle Eastern strategic rivals Egypt and the UAE within the framework of a systemic rivalry between Ankara and Paris across the Middle East and North Africa.  France is Egypt’s third largest weapons supplier and maintains a naval base in the UAE. France’s cooperation with Egypt and the UAE to support General Haftar and the LNA in eastern Libya against the western Libyan GNA supported by Turkey is seen as part and parcel of French policy to contain Turkish influence in the entire Mediterranean basin. Total’s acquisition of significant oil holdings in eastern Libya one month after it partnered with ENI in the development of Cypriot offshore natural gas served to reinforce the sense of systemic competition.

IMPLICATIONS: During 2019, Turkey expanded its policy of sending exploration vessels and drillships into Cypriot waters, reaching a total of four vessels each accompanied by a naval escort of Turkish warships.  As a counter-measure, the French frigate FS Aconit conducted three days of interoperability exercises with Cypriot naval vessels in January 2019. In May 2019, France signed an agreement with Nicosia to service its warships at Cyprus’s Mari naval base in response to Turkey’s announcement that it would send another drillship to Cypriot waters. Speaking at the June Med7 Summit of Mediterranean EU member states that took up the issue of Turkey’s drilling in Cypriot waters, France’s President Emmanuel Macron vowed that “The European Union will not show any weakness on this subject,” and further threatened Turkey with EU sanctions if it did not stop its drilling activities.

In response to the presence of Turkey’s drillships, France conducted naval exercises with Cyprus in October 2019 whose purpose, as described by France’s Defense Minister Parly, was “to enable Cyprus, an EU member state, to be able to assume its responsibilities in its sovereign waters.” French Foreign Minister Le Drian, addressing France’s Senate to explain the government’s actions, unequivocally reiterated France’s position that “The Turks have started a drilling action in waters under Cypriot sovereignty.” Le Drian further elaborated that “We have decided to put in place a framework sanctions regime if, by any chance, Turkey were to continue these operations. We will provide for a military presence in this area.”

Stymied in Cyprus, Turkey sought to press for a strategic advantage in Libya through an overt and formal alliance with the GNA in Tripoli. On November 27, 2019, Turkey and the GNA government signed two Memoranda of Understanding – an agreement on the “Delimitation of Maritime Jurisdiction Areas in the Mediterranean,” and an agreement on “Security and Military Cooperation.” The maritime delimitation agreement between Ankara and Tripoli defines an 18.6 nautical mile boundary between Turkey and Libya, establishing a maritime zone that denies all of Greece’s islands an exclusive economic zone (EEZ). The boundary agreement with the UN-recognized government in Tripoli, in Ankara’s view, provides Turkey a legal counter-claim to contest the EEZs established by Greece’s bilateral understandings with Egypt and Cyprus, upon which the development of Cyprus’s offshore natural gas depends.

In contrast to France’s covert support for Haftar’s efforts in Libya, Turkey opted for an overt security relationship that was activated by the GNA on December 19, 2019. Turkish military intervention enabled the GNA to completely halt Haftar’s 14-month campaign to capture Tripoli and, within six months, Turkish-supported GNA forces have managed to push the LNA 280 miles (450 km) back eastward to the coastal city of Sirte. The gateway for the GNA to capture Libya’s oil crescent region, the LNA is making its stand in Sirte, the crossing of which Egypt declared, on June 20, as its red-line for Turkish intervention.

CONCLUSIONS: The Franco-Turkish systemic rivalry shows no signs of abating and has become a significant factor in the volatility of several flashpoints in the Mediterranean region. On June 15, 2020, Turkish media closely aligned with the government of President Erdoğan disclosed that Turkey has been in discussions with the GNA to establish a Turkish naval base in the GNA coastal stronghold of Misrata and a Turkish air force presence at the recently re-captured al-Watiyah air base, located 17miles (27 km) from the Tunisian border.

With Turkey’s effective demonstration of its expeditionary capabilities in Libya having already increased Ankara’s clout in Tunisia and Algeria, a permanent Turkish military presence in Libya will cement Turkey’s status as a major power in North Africa as well as enhance Turkey’s diplomatic and economic reach into the Sahel. Facing this prospect, France may opt to support the establishment of a Russian and Egyptian-managed protectorate in eastern Libya in the hopes of limiting Turkey, further fracturing the relations between the two NATO allies.

Prof. Michaël Tanchum is a senior fellow at the Austrian Institute for European and Security Studies (AIES) and a fellow at the Truman Research Institute for the Advancement of Peace, the Hebrew University, Israel, and at the Centre for Strategic Policy Implementation at Başkent University in Ankara, Turkey (Başkent-SAM).  @michaeltanchum

Previous Article
Turkish court releases three journalists on trial for revealing state secrets
Next Article
‘The Tools Are Available to The Administration’ to Press China on Uyghurs: US Religious Freedom Envoy

‘The Tools Are Available to The Administration’ to Press China on Uyghurs: US Religious Freedom Envoy
NAT 25th June 2020
Submit an Op-Ed
Tweets by NewsAboutTurke1