CCBE: Independence, integrity and freedom of expression of the legal profession at stake in Turkey

CCBE: Independence, integrity and freedom of expression of the legal profession at stake in Turkey 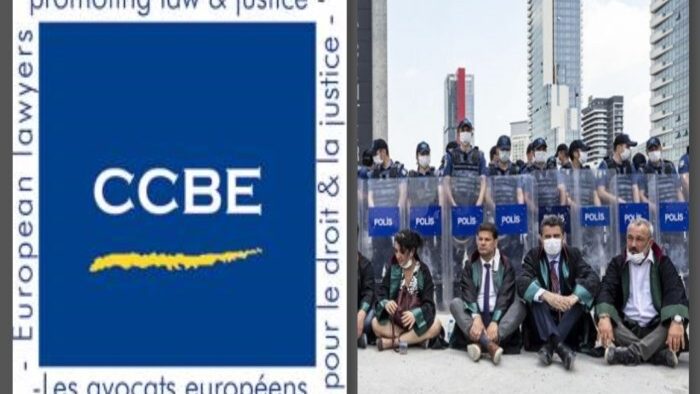 [d Council of Bars and Law Societies of Europe (CCBE) expressed “serious concerns over the recent repressions by the Turkish authorities on the freedom of expression of the legal profession aiming at further restricting their independence” in a press release today.

The statement comes after the police have prevented the presidents of several Turkish bar associations and lawyers from entering the capital city of Ankara last Monday as part of their protest called the “defense march”. The group was protesting a new draft bill proposed by the Turkish government that the critics claim will change the electoral system of bar associations and further restrict the independence of the bars and the legal profession.

Recalling the relevant provisions of the European Convention on Human Rights, the United Nations Basic Principles on the Role of Lawyers and the Charter of Core Principles of the European Legal Profession, CCBE called on the Turkish authorities to “withdraw and refrain from taking any measure which would have the effect of hindering the independence, integrity and freedom of expression of the legal profession in Turkey.”

Bar associations announced that they will continue the “defense march” in different cities including İstanbul, İzmir and Antalya. Preparations are also underway for a large gathering called “defense rally” on July 4 in Ankara with the participation of lawyers from around Turkey.

Founded in 1960, CCBE is an international non-profit that works to advance the views of European lawyers and to defend the legal principles upon which democracy and the rule of law are based.