US opposes ‘all foreign intervention’ in Libya: Ambassador to Egypt

US opposes ‘all foreign intervention’ in Libya: Ambassador to Egypt 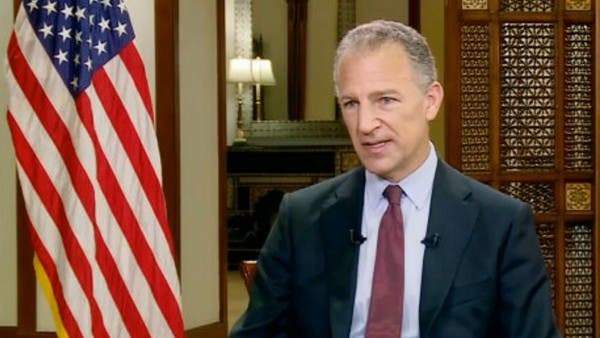 The United States opposes “all foreign intervention” in Libya and is engaged in active diplomacy, the US ambassador to Egypt told Al Hadath during an interview.

“Let me be very clear, the United States opposes all foreign intervention in Libya,” Jonathan Cohen said. “We believe that it is imperative that a ceasefire be respected, that the UN arms embargo be respected, and that the parties reengage in a political negotiation to bring a Libyan solution under UN auspices to Libya.”

He also affirmed that the US is taking action by engaging in “very active diplomacy.”

US President Donald Trump and Secretary of State Mike Pompeo had recently discussed Libya with Egyptian President Abdel Fattah al-Sisi and the Egyptian foreign minister, according to Cohen.

“We will continue to engage and use the tools that we have,” he added. “And, we’re giving strong support to the UN mission there, which right now is led… by a former American diplomat. I think our position on Libya is clear.”

Tensions between Egypt and Libya’s Government of National Accord have been on the rise in recent weeks. In June, al-Sisi ordered his army to stand ready carry out any mission outside the country, if necessary, amid high tensions over Turkey’s intervention in neighboring Libya.

Turkey has been accused of sending Syrian mercenaries daily to fight with the GNA. These actions have been widely criticized by the US and other countries.

The US, on several occasions, has called for de-escalation and an “immediate end” to foreign involvement in Libya.

“The United States strongly opposes military escalation in Libya – on all sides,” the US National Security Council said in June. “We urge parties to commit to a ceasefire and resume negotiations immediately. We must build on progress made through the UN’s 5+5 talks, the Cairo Initiative, and the Berlin process.”

However, the United States and Egypt have close ties because of their aligned national interests, the ambassador added during the interview.

“They line up through the categories of military, security, economics and trade, politics and regional issues, people-to-people exchanges and culture,” Cohen said.

He also said that the US listens to and consults with Egypt on all of the issues that the two countries “care about.”

“We’ve seen the positions that we’ve staked out on occurred in Libya,” he added.

To view this video please enable JavaScript, and consider upgrading your web browser

Meanwhile, the ambassador aims to further strengthen the partnership between the two countries to work for an “Egypt that is strong, secure and prosperous, because that’s in America’s interest.”

The US is working with Egypt to strengthen its counterterrorism capabilities, border security and defense modernization, according to Cohen.

The two countries are also working to increase the trade and investment opportunities, Cohen said.

Meanwhile, the US is continuing its development assistance to try and build “an Egypt that is economically prosperous in the future,” which will in turn benefit American companies, according to the ambassador.

“It creates jobs in both of our countries,” Cohen told Al Hadath.

‘Too late to stop’: Egypt and Turkey ramp up Libya war preparations