Turkish admiral summarily dismissed during NATO assignment tells NPR: Maybe I’m not as safe as before

Turkish admiral summarily dismissed during NATO assignment tells NPR: Maybe I’m not as safe as before 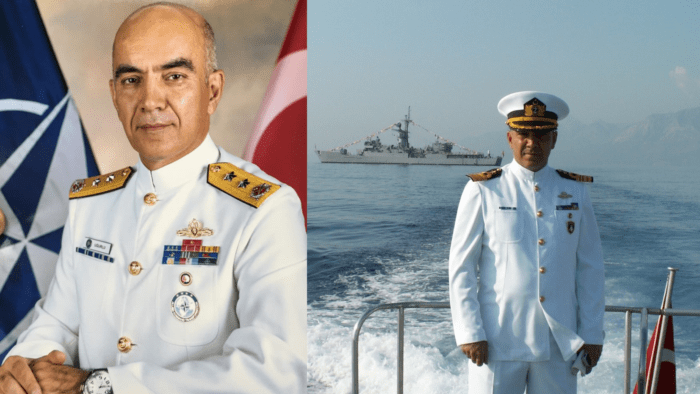 Rear Adm. Mustafa Uğurlu, Turkey’s flag officer at NATO’s Allied Command Transformation (ACT) based in Norfolk, Virginia, who was summarily dismissed from the military following a coup attempt in Turkey on July 15, 2016, sat for an interview with National Public Radio (NPR).

Rear Adm. Uğurlu was just wrapping up a meeting when an aide rushed up to him.

“There is something happening in Turkey,” he said on that July day in 2016.

A major bridge was closed to traffic in Istanbul and Turkish Armed forces were staging a coup. Tanks were in the streets. Helicopters and war planes streaked across the sky.

Uğurlu remembers trying to call senior officers in Turkey. He couldn’t get through.

The admiral walked back to his office. “A military coup?” he said to himself. “During primetime on a Friday evening, by closing the most heavily trafficked bridge in Istanbul? This was shockingly poor strategy.” He brushed aside the story.

Two weeks later, Uğurlu would himself be charged with taking part in the coup, with the help of the US and NATO. His picture appeared in the Turkish press. The admiral was dismissed from his job and ordered home.

Instead, he decided to seek asylum in the United States, with some two dozen fellow Turkish officers who worked at the NATO training command. They all spoke with NPR a few months after the failed coup, denied they were involved, insisted their names not be used and their voices disguised on the radio, fearing retribution.

Now, as the most senior officer, Uğurlu has now decided to speak openly. Why?

“Nothing has changed” in Turkey, he tells NPR, noting that the government under President Recep Tayyip Erdoğan has become more and more repressive. “And I want something to be changed because Turkey, my country home, that is in a bad condition and I decided to speak my own voice.”

The admiral and the other officers in the Norfolk area watched as thousands of their colleagues were arrested, including some of his close friends.

“Almost all of my classmates are in jail, for life in prison without parole,” he says. “And they were tortured during the first days after the coup attempt. And they were just on holiday or somewhere just like me. They were not guilty, I believe.”

The Turkish Embassy said in a statement to NPR that there is still an arrest warrant for the admiral, and questioned why he won’t return home.

“Why would a high ranking military general seek asylum and refuse to go back to Turkey, if he were not affiliated with the cult that perpetrated the coup attempt?”

The embassy also alleged “many high-level fugitives” linked to the coup are in the US.

Uğurlu, 54, rose to two-star rank in the Turkish Navy, commanding warships, taking part in the campaign in the Balkans and working at a NATO command in Italy.

American military officers privately say that a number of officers arrested with whom they worked closely were clearly not culpable in the coup but were suspect because they either worked for NATO or spent time in the US.

The arrests continue in Turkey, four years after the failed coup. Some 80,000 military officers, judges, lawyers, teachers and journalists are facing trial. Some 130,000 have lost their jobs.

And with the fourth anniversary of the alleged coup, July 15 is now “New Democracy and National Unity Day.”

For his part, President Erdoğan marked the fourth anniversary by once again insisting that the coup was instigated by the followers of Muslim cleric Fethullah Gülen, a onetime Erdoğan ally who is now living in Pennsylvania. Gülen strongly denies any involvement.

They tried to “shackle this freedom-loving nation, thank God they could not succeed,” Erdoğan said.

Uğurlu and some of his fellow officers are convinced that it was Erdoğan himself who staged the coup in an effort to expand power and eliminate his critics.

“It was a false flag operation,” Uğurlu says. “It was a perfect plan initiated, controlled and executed by the regime. But they made many mistakes and left clear evidence and witnesses behind them.”

The admiral insists if the Turkish military “wanted to make a real coup, it will be a very successful one.”

Turkey analysts, however, doubt that Erdoğan was behind the failed coup.

Still, Ellehuus and others say that Erdoğan has clearly benefited from the coup — which he termed “a gift from God” — allowing him to swiftly eliminate any criticism of his government.

Uğurlu says he tries not to reach out to any of his friends in Turkey.

“We are not trying to communicate with them because we believe they are being tapped and they are being following and their families are still under extreme pressure,” he says. “They are not allowed to leave the country.”

Still, some military officers and others continue to flee.

Last year, NPR interviewed a Turkish naval officer who was slipped across the border into Greece and made his way to California, where his wife and two young children followed later.

Uğurlu and the other officers in the Norfolk area are still waiting on their asylum, which he admits was difficult to request.

“It was very painful. I love my homeland,” he says. “I have served 30 years with loyalty to my lovely country, but I couldn’t turn back.”

Uğurlu, along with his wife and two adult children, says he and his fellow Turkish officers have been embraced by the Norfolk community, including invitations to Thanksgiving dinners.

“Each Turkish family has an American sister family,” he says. “We are exchanging cultural values.”

The man who once commanded warships and worked in the upper reaches of NATO says he’s now helping his wife manage a local dress shop. “She is my boss now,” he says, adding that his wife also runs a charitable organization trying to raise awareness about what’s happening in Turkey.

The admiral still worries about whether the Turkish state will try to track him down. He says Turkish agents have kidnapped Turkish officers who fled to other countries.

But his family is making the best of it in the United States, he says. His daughter is set to marry an American in September, and his son is studying at a local university.

And the other Turkish officers who remain are also putting down roots. One is an airline pilot, another is a manager for Amazon and still another is teaching at a nearby college.

“We are happy,” Uğurlu says. “We are in one of the best countries in the world for us. But we always think about our friends there. Torture is still going on. Their families are in a difficult condition and they are suffering.”

Previous Article
Turkey pushing ahead with its agenda, risking the wrath of US, EU sanctions
Next Article
I was tortured at Turkish border post, migrant worker claims