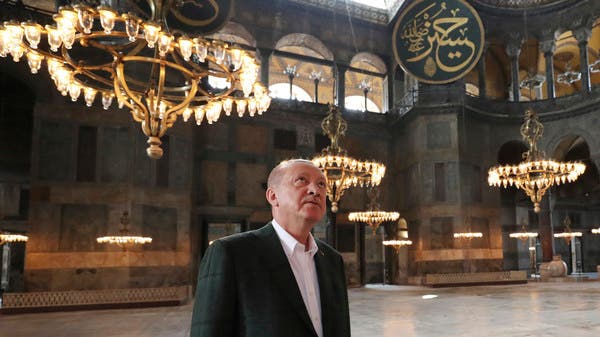 Turkish President Recep Tayyip Erdoğan converted the Hagia Sophia into a mosque on July 10, drawing criticism from foreign governments ranging from the United States to Russia, including a joint condemnation by 27 European Union foreign ministers. Ankara’s fait accompli has raised legitimate concerns about the potential damage to this sixth-century world heritage site, revered by Christians and Muslims alike. While Hagia Sophia’s conversion poses a significant risk to the monument’s sacred heritage, the Turkish government’s accompanying rhetoric will be equally damaging to interfaith relations.

In his televised address to the nation regarding Hagia Sophia, Erdoğan said its conversion into a mosque would gratify “the spirit of conquest” of Mehmet II, the Ottoman sultan who captured Constantinople from the Byzantines in 1453. The next day, Erdoğan’s ultranationalist coalition partner Devlet Bahçeli echoed the Turkish president by proclaiming that the course of the Turco-Muslim conquest, “which has been going on for 567 years, has entered a new phase.”

Such belligerent rhetoric from the highest levels of the Turkish government not only threatens Turkey’s neighbors, which have been increasingly wary of Erdoğan’s irredentist ambitions, but also targets the country’s very own citizens. Elpidophoros, the archbishop of the Greek Orthodox Archdiocese of America—and a native of Istanbul—warned that “a mentality of the conqueror, and claiming conqueror’s rights… changes the relationship of the state to its citizens.” He added, “I am a Turkish citizen myself, and I don’t want the state to have the mindset of the conqueror, because I am not a conquered minority. I want to feel in my own country as an equal citizen.”

The archbishop’s concern is justified. The conquest mentality of which he complains permeates Turkey’s official rhetoric and public discourse, relegating religious minorities to the status of subjects of a Muslim-dominated polity. Even Turkey’s foreign ministry, which once had the reputation of being the country’s most secular and pro-Western bureaucracy, fell victim to the Erdoğan government’s conquest mentality in its rebuttal to US Secretary of State Mike Pompeo’s criticism. When the ministry’s spokesperson bragged that Turkey has been “delicately cherishing the historical, cultural, and spiritual value of Hagia Sophia since its conquest,” he effectively blurred the distinction between the Ottoman Empire and the Turkish Republic, embracing a fifteenth-century conquest on behalf of a republic of equal citizens established through the overthrow of that empire in the twentieth century.

What is more alarming than the Turkish ruling elite’s conquest mentality is their frequent and proud use of a violent trope, “the right of the sword,” to claim legitimacy. Erdoğan’s ultranationalist partner Bahçeli argued that the legal basis for converting Hagia Sophia rests on “the right of the sword” that Mehmet II claimed in 1453. Turkey’s pro-government news site A Haber went as far as to publish a guide, entitled “What does the right of the sword mean?” which it presented as the justification for Erdoğan’s move.

Such prejudicial language not only targets Turkey’s religious minorities, but also intimidates members of the country’s Muslim majority who oppose the government’s supremacist policies. The deputy leader of Erdoğan’s Justice and Development Party accused Turkish citizens who oppose Hagia Sophia’s conversion of acting like “the Byzantines among us,” insinuating they are traitors. Similarly, Bahçeli referred to the move’s critics as “remnants of the Byzantines” and the “clandestine Byzantine lobby’s Westophile native collaborators.” Smearing the opposition—Muslims and non-Muslims alike—as fifth columnists is a frequently-deployed trope that aims to silence Turkey’s dissident voices, making the country’s minorities feel even more abandoned.

The ruling coalition’s attempts to silence citizens who oppose Hagia Sophia’s conversion into a mosque is intended to conjure the illusion of a unanimous popular will behind their policy. In Bahçeli’s words, Hagia Sophia’s conversion has fulfilled the “the will of our nation.” Ironically, the Turkish government took no steps to promote deliberation of their policy. It did not consult any of the stakeholders in parliament or another platform, including the ecumenical patriarchate, and presented their fait accompli as reflecting the desires of a monolithic populace, where disagreement is evidence of treason and foreignness.

It is not surprising that the Turkish government’s Hagia Sophia policy and toxic rhetoric received praise from other extremists around the world. Gaza’s ruling militant group Hamas was the first to declare its support. The Muslim Brotherhood followed, congratulating Turkey for this “historic step,” which they celebrated for restoring Hagia Sophia’s right to “its owners.”

The conquest mentality that has shaped the Turkish government’s Hagia Sophia policy and rhetoric not only puts the sacred heritage of Turkey’s religious minorities at risk, but also threatens their lives, making them potential targets of hate crimes. Given the appeal of Erdoğan’s pan-Islamist policies in the Middle East and beyond, such explosive rhetoric has the potential to embolden and incite other supremacists. This is a sad turn of events for a country that for decades remained a beacon of secular democracy for the world’s Muslim-majority nations.

Aykan Erdemir is a former member of the Turkish parliament and senior director of the Turkey Program at the Foundation for Defense of Democracies (FDD). He serves on the Anti-Defamation League’s Task Force on Middle East Minorities and the steering committee of the International Panel of Parliamentarians for Freedom of Religion or Belief (IPPFoRB). @aykan_erdemir

Tugba Tanyeri-Erdemir is the coordinator of the Anti-Defamation League’s Task Force on Middle East Minorities. @TurkishFacade