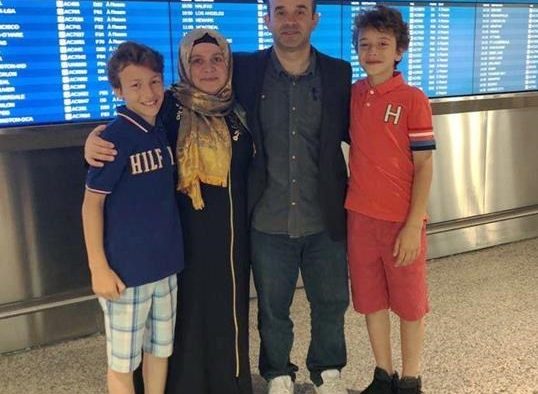 Davud Hanci is greeted by his wife Rumeysa Hanci and their sons Vedat, 13, and Cemil, 12, at Toronto’s Pearson International Airport in a July, 2019 handout photo. Davud Hanci would tell inmates to treat their time as valuable when he was working as a chaplain in Alberta prisons and jails. The imam tried to follow his own advice during the nearly three years he spent confined alone in a Turkish prison cell on allegations that he helped orchestrate an attempted military coup. THE CANADIAN PRESS/HO, *MANDATORY CREDIT*

Davud Hanci would tell inmates to treat their time as valuable when he was working as a chaplain in Alberta prisons and jails.

The imam tried to follow his own advice during the nearly three years he spent confined alone in a Turkish prison cell on allegations that he helped orchestrate an attempted military coup.

The Turkish-Canadian dual citizen prayed, read and exercised to keep his mind busy.

“I believe that really helped me to survive physically and psychologically,” Hanci, 44, said in an interview from Toronto, where he lives with his wife, Rumeysa, and sons Vedat, 13, and Cemil, 12.

Hanci immigrated to Canada from Turkey in 2002. He lived in Calgary and found a meaningful job counselling Muslim inmates.

In 2016, his brother in Turkey said Hanci should visit because he might not get another chance to see their father, whose heart was failing.

Hanci, his wife and sons flew there on July 7, 2016, eight days before a faction of the Turkish military tried to overthrow the regime of President Recep Tayyip Erdogan.

Erdogan declared a state of emergency and began cracking down on government critics. Tens of thousands were arrested and more than 130,000 lost their public service jobs.

The following week, Hanci was having tea with a cousin in a shop in his hometown of Trabzon on the Black Sea coast. Another man, whom Hanci did not know, was there and heard him talking about Turkey’s political situation.

That night, Hanci was told police wanted to speak to him, purportedly about his passport. He thought the matter could easily be straightened out.

A TV was playing the state-run news channel at the police station. There was a breaking news bulletin that an associate of Fethullah Gulen, a U.S. cleric accused of organizing the coup attempt, had been arrested in Trabzon.

Then, another news flash referred to Hanci by name as the “right-hand man” of Gulen.

“Then I realized I am in real trouble.”

He says he has never met Gulen, who himself denies he had anything to do with the coup attempt.

Hanci was taken to a prison 1,200 kilometres away while he awaited trial.

He has seen his file and now knows he was accused of being a CIA agent trying to overthrow the Turkish government.

Hanci believes police “made a story” based on what he was heard saying in the tea shop. He says the allegations are “all lies.”

There were fears police would also arrest Hanci’s wife, but she and the children returned to Canada soon after his detention.

It would be more than two months before Hanci would learn they were safe.

It took nearly two years before he was able to speak to them on the phone. The calls were always scheduled for 3 a.m. ET and the boys were too groggy to have a decent conversation.

Hanci said he was never hurt physically, but the Turkish regime tried to torture him psychologically by keeping him in solitary confinement.

It was cold in the prison at night and he said he still feels chills in his head and feet, even on a hot day.

A judge sentenced Hanci in 2018 to 15 years, but a higher-court judge later cut that in half.

Taking into account time served, good behaviour and probation, Hanci has about 1 1/2 years left to serve in jail.

He was released in March 2019 pending a hearing in Turkey’s top court, which has a years-long backlog.

Hanci remained in Turkey for a few months and was able to spend time with his father before he died in February.

Family in Canada made arrangements for Hanci to leave the country, even though it was not allowed. He declined to elaborate.

His wife and children greeted him at Pearson International Airport last July.

“We just hugged each other and cried.”

Hanci said he sometimes has to touch his wife to believe she’s real and has nightmares that he’s back in Turkey, being chased down.

He has been trying to resume his prison chaplain work, but can’t get phone calls returned. He started volunteering, but the COVID-19 pandemic put that on hold.

He believes his experience gives him a valuable new perspective.

He has done some odd landscaping jobs, but is turning his focus toward completing a master’s degree in theology at Western University in London, Ont.

This report by The Canadian Press was first published July 26, 2020

Previous Article
‘There is no red line.’ What is keeping Turkey and Egypt from war in Libya?
Next Article
Erdogan’s Hagia Sophia Rhetoric Adds Insult to Injury