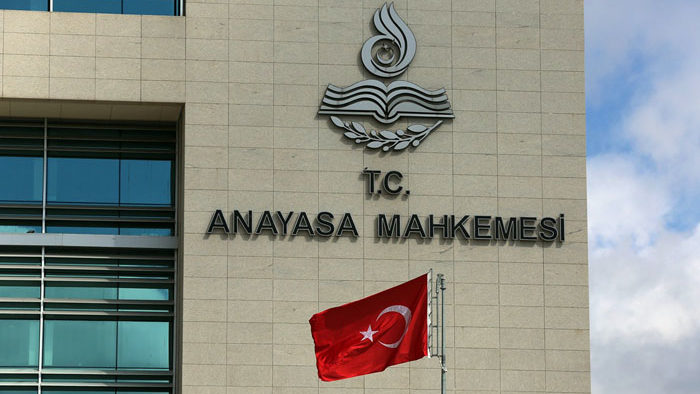 Devlet Bahçeli, leader of the Nationalist Movement Party (MHP), had on Wednesday called for a restructuring of the Constitutional Court (AYM) in line with the executive presidency that was introduced in the country in 2018 thanks to support from his MHP.

“The AYM must be restructured in compliance with the new presidential system,” Bahçeli had said, adding that he was expecting the issue would be discussed during parliament’s new legislative year.

Speaking to reporters after addressing lawmakers at the opening ceremony of the new session in parliament, Erdoğan responded to his ally Bahçeli, saying that he would “gladly approve” such a proposal as soon as a step is taken by parliament towards that end.

Once enemies, Erdoğan and Bahçeli became staunch allies following a coup attempt in July 2016. Since then Erdoğan has several times accepted proposals put forward by Bahçeli, such the holding of a snap election in 2018 and the passage of an amnesty law.

The MHP leader’s most recent proposals concern reinstatement of the death penalty, abolishment of the critical Turkish Medical Association (TTB) and amendment of the country’s election laws.

On Thursday Erdoğan also accepted Bahçeli’s capital punishment suggestion. With the proposal, the AKP-MHP partnership is actually targeting political prisoners and inmates convicted on politically motivated charges, critics claim. The proposal appears, at least on paper, to be aimed at perpetrators of murder and the abuse of women and children.

Bahçeli’s AYM suggestion apparently stems from a recent ruling of the court. On June 9 the AYM said the lengthy detention of Selahattin Demirtaş, the former leader of Turkey’s pro-Kurdish Peoples’ Democratic Party (HDP), had exceeded a reasonable period and that his right to freedom had been violated. However, the Ankara 19th High Criminal Court, where Demirtaş is currently standing trial, refused to acknowledge the AYM ruling.

“The rulings cause irreparable damage under the guise of rights violations,” Bahçeli said in reference to the AYM decision.

Jailed for four years, Demirtaş was released by a court; however, another court order was quickly issued before he could be freed from prison.

Earlier in September Interior Minister Süleyman Soylu had also targeted the top court after it annulled an article in Law No.2911 on meetings and demonstrations that said, “Demonstrations and marches cannot be held on intercity roads.”

On September 11 the AYM cancelled the relevant provision after a group of miners, whose march was blocked by the authorities in October 2019 citing the law, appealed to the court.

In reaction, Soylu condemned AYM President Zühtü Aslan on September 14, saying: “if [you say] we are a ‘free’ country … [then] you don’t need police protection. Let’s see, go to work on your bicycle. I’m all for it! I’ll go to work in my car. Will you?”

On September 23, Aslan responded to Soylu in a statement without mentioning his name.

“[In order] to criticize any [court ruling], one should first read and understand it,” Aslan said, calling on Soylu to wait until a reasoned decision is released.

Soylu had previously confirmed allegations of a call to Aslan in a bid to talk about a court case. Soylu’s call was considered by critics a move to influence the court, while the court remained silent about the claim.

The top court consists primarily of judges who were appointed before the executive presidential system was introduced. If a provision is passed in parliament to overhaul the court, all its members will be replaced and new ones appointed by Erdoğan.

Amid the recent AKP-MHP attacks on the court, it has postponed reviewing an individual application scheduled for this week. Osman Kavala, a rights activist, was arrested for the second time in February after being acquitted in the 2013 Gezi Park protests case. The second arrest  relates to charges of attempting to overthrow the constitutional order through the 2016 failed coup. His lawyers defined the new arrest as as a tactic to circumvent a ruling by the European Court of Human Rights (ECtHR).

The AYM has also been criticized for its stance against violations of rights, including those of its own former judges Alparslan Altan and Erdal Tercan.

In the wake of the coup attempt, the highest court dismissed Altan’s complaints, which said the order for his detention was unlawful in two respects. Firstly, his immunity as a judge had not been lifted by the AYM, which it should have done first due to a special law linked to his status as an AYM judge. Secondly, he argued that his detention had been ordered even though no evidence against him had been produced at the time his arrest was ordered.

His detention has also been declared unlawful by the ECtHR, which said Turkey violated Altan’s “right to liberty and security.”

The AYM president had attracted fire from critics on social media for bowing to Erdoğan during a ceremony in 2017, a move that was seen as a lack of independence of the Turkish judiciary.