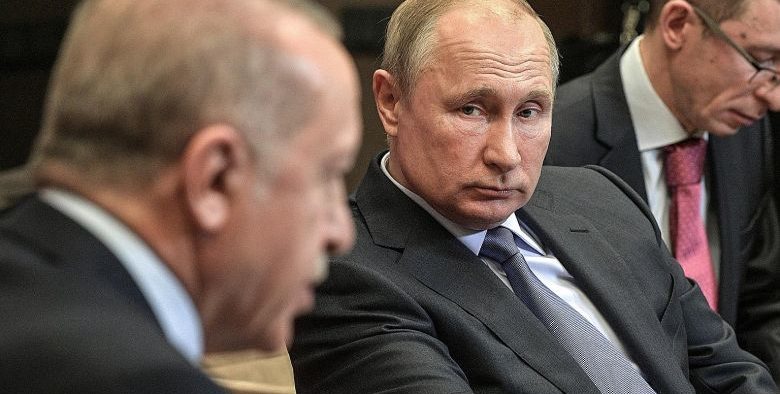 The distance between Azerbaijan and the Mediterranean spans nearly 2,000 miles, but Mr Erdogan’s willingness to involve himself in the latest flare-up in the Caucasus is, like his meddling in the eastern Mediterranean, all part of his attempts to transform Turkey into a major regional power. Whether it is driving the Kurds from their homes in northern Syria, or acting as a peace broker to resolve the differences of rival Palestinian factions, Mr Erdogan is determined to expand Turkey’s influence wherever possible.

He is often accused of harbouring plans to recreate the glory of the Ottoman Empire, and a recent map of “Greater Turkey”, published by one of his supporters, suggests the extent of those ambitions. The area claimed includes parts of Greece, Bulgaria, Cyprus, Syria, Iraq, Georgia and Armenia – which might explain Mr Erdogan’s support for Azerbaijan in its current clash with Yerevan.

Mr Erdogan’s ambitions for Turkey are not, though, without their challenges. Turkey’s aggressive conduct in the Mediterranean, where it has been accused of provocative acts against Greece and Cyprus, has drawn censure from the EU, with some member states calling for the imposition of sanctions. The Turkish leader’s behaviour is also likely to exacerbate tensions with Nato, of which Ankara retains membership. Canada yesterday became the first Nato country to react by banning the sale of drone technology to Turkey, following claims Turkish drones have been used against Armenian targets.

An even bigger obstacle will be the opposition Mr Erdogan can expect from Moscow, which entertains its own dreams of reclaiming former glories. Although Mr Erdogan has sought to improve ties with Russia, and recently negotiated a multi-billion pound arms deal with the Kremlin, tensions remain on numerous fronts, such as Syria and Libya, where the two countries have competing interests.

The same is true with the Nagorno-Karabakh issue, where Moscow’s support for Armenia is influenced by the fact that the country plays host to an important Russian military base.

Any support Mr Erdogan provides to Azerbaijan in its military campaign against Armenia puts him at odds with Moscow, a move that could seriously hinder his dream of reclaiming Turkey’s former Ottoman glory.

Tags:
Previous Article
Turkey To Test S-400 Defense System Next Week: What Next?
Next Article
$120 bn made to ‘evaporate’ to keep dollar rate below TL 7, former Turkish economy minister says

How realistic are Turkey’s ambitions over strategic corridor with Azerbaijan