Erdoğan is well protected, what about the rest in Turkey?

Erdoğan is well protected, what about the rest in Turkey? 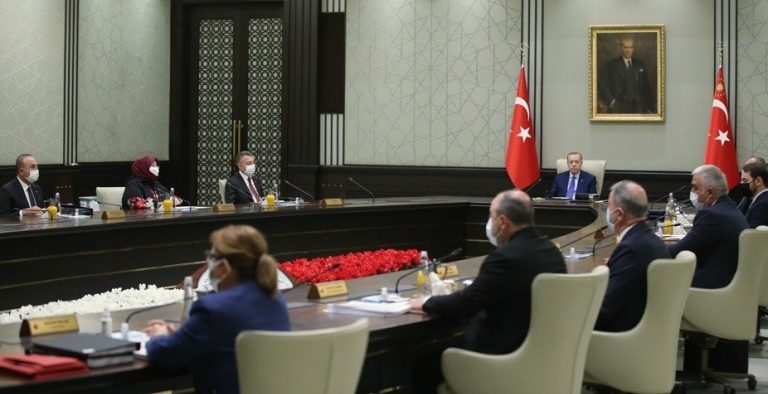 It is known that President Erdoğan and his close circle are tested for the Covid-19 virus each day. But the worsening situation requires furtner measures for the people. (Photo: Presidency)

President Tayyip Erdoğan is well protected from Covid-19. His spokesperson, İbrahim Kalın, announced that the team working close to the president is also tested for the virus every day. Thanks to the test requirement for those who would approach the president, some lawmakers were tested positive. Along with the president, his family, and his close team are well protected from the Covid-19 virus but the rest of the people in Turkey are left to recommendations for using masks.
The Interior Ministry denied an Oct. 21 Reuters report that said that “further curfews may be imposed.” However, social media users have reminded that the government had denied such reports on measures after the pandemic first appeared in the country in March. The measures were taken eventually.
Erdoğan has to introduce new restrictions to better protect us from Covid,19. He will do it so sooner or later… However, each day of delay increases the risk. Maybe not on the President’s family and close colleagues, but for us. What is this stubbornness for? Is it against an epidemic that has swept the world? It is not possible to understand.

Why does the Oct. 15 statement still linger?

Health Minister Fahrettin Koca announced on Oct. 21 that 68 more people from Covid-19 in one day. The number of patients, according to official data, was 2013; in other words, the situation has got worse and regressed to the figures in May with around 2,000 new patients per day. The minister makes contradicting statements, saying on one hand that the spread is on the rise in many provinces including Istanbul, and on the other hand, that “We are fighting back very well, only 48 percent of the bed capacity is full.” He had said he would announce the overall figures on Oct. 15; a week on, we are still waiting for it.
In today’s world, it is not possible to hide everything all the time. And there is also a limit to masking a reality that millions face every day by methods such as threatening to divide or shut down the Turkish Medical Association. We are hardly protected from Covid-19 further than warnings on washing our hands, wearing a mask, and not getting together. The health minister posts complaints on his Twitter account, showing pictures of crowds. Is it the opposition parties or foreign forces that allowed the formation of those crowd pictures? Of course, it is the government. Who should take action? Of course, the government.

Is it for the economy?

What keeps Erdoğan back from declaring stricter measures that will already be taken sooner or later to better protect the people from Covid,19? Is it the economy? So, how will the spread of the disease contribute to the economy? Any benefits expected from keeping shops open in a bid to stop the vote meltdown in the ruling party grassroots and easing the administrations of The Union of Chambers and Commodity Exchanges of Turkey (TOBB) and the Turkish Confederation of Tradesmen and Craftsmen)? Do you think TOBB and TESK administrations are unaware of the disturbance of their grassroots? There is a fact that Treasury and Finance Minister Berat Albayrak may be afraid to tell the president because he is responsible. This economic order is coming to an end. Davos World Economic Forum President Klaus Schwab, the global spokesperson of the current economic order, said on Oct 21 that this was happening. If Albayrak needs more detailed information, he may ask Cüneyd Zapsu, a Davos regular and a founding member of the ruling Justice and Development Party (AKP). Schwab said the neo-liberal economic order has come to an end because of Covid 19. The IMF’s outlook on the world economy is increasingly pessimistic; I read them from their website, this is not a secret. Please stop being stubborn against the plague of the age. New measures should immediately be taken before the upcoming flu outbreak aggravates the picture.