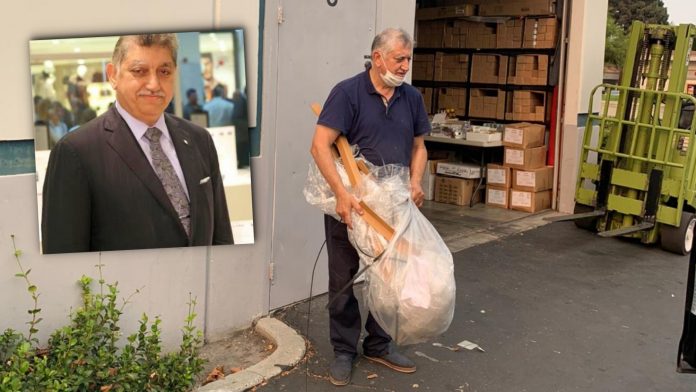 Days after the abortive putsch on July 15, 2016, the Turkish government seized Naksan Holding, which comprises more than 50 companies operating in various sectors including industry, energy, construction and transportation, appointing trustees to replace its board of directors due to their alleged links to the Gülen movement.

Ankara deems the faith-based movement inspired by Muslim preacher Fethullah Gülen as a terrorist organization and accuses Gülen as well as members of his movement of masterminding the coup attempt that killed 251 civilians in Turkey.

According to an exclusive report by Sevinç Özarslan from Bold Medya, Nakıboğlu has been working at a food storage facility in California for more than two years while also working part-time jobs to make ends meet, contrary to allegations previously made by Turkey’s pro-government media outlets that he leads a life of luxury in the US.

The report said Nakıboğlu received unemployment benefits for a while during the COVID-19 pandemic.

While his daughter has lived in the US since 2014 and now reportedly cleans horse stables for a living, Nakıboğlu’s son Bahaeddin currently provides advertising for small businesses operating through Amazon, after his company, Innoworld, involved in providing rental premises for entrepreneurs, closed down during the pandemic.

The father and son are among 25 charged with terror-related crimes by the Gaziantep Chief Public Prosecutor’s Office in the aftermath of the attempted coup.

Naksan Chairman Cahit Nakıboğlu, a 70-year-old businessman, spent two years behind bars after he was arrested on July 14, 2016, over his alleged ties to the Gülen movement. Although a Gaziantep court released him into house arrest due to medical problems on January 6, 2018, he was re-arrested the next day after journalist Cem Küçük, a staunch supporter of President Erdoğan, criticized the court’s decision.

His sons Taner and Emre Nakıboğlu, who received 15 and 11 years in prison, respectively, also over alleged links to the Gülen movement, are still behind bars.

Nakıboğlu family was one of the wealthiest families in Turkey’s Gaziantep province before their company was seized by Erdoğan’s AKP government as part of its post-coup crackdown on the Gülen movement.

Although Gülen and members of his faith-based movement strongly deny any role in the abortive putsch or any terrorist activity, the Turkish government launched a massive purge under the pretext of an anti-coup fight soon afterward and has removed more than 150,000 people from public service.

The government also seized assets such as schools, universities, media outlets, companies and apartment buildings and the wealth of individuals, corporations and organizations that were deemed to have ties to the movement.

In addition to Naksan Holding, Turkey’s Savings Deposit Insurance Fund (TMSF) has taken over major conglomerates including Dumankaya, Boydak Holding, the Koza Ipek Group and Kaynak Holding among 880 other private companies, according to Turkish media reports.

No figures are available verifying how much personal wealth and how many assets were seized by Erdoğan’s government during the massive post-coup purge still ongoing in Turkey.