Erdogan’s game: why Turkey has turned against the West

Erdogan’s game: why Turkey has turned against the West 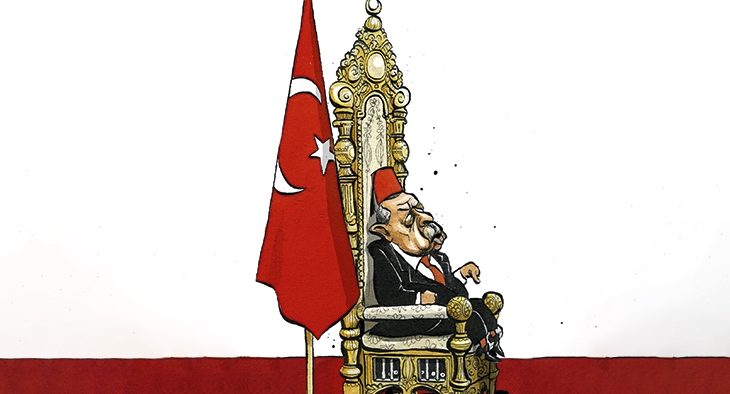 The Turkish president carefully plays Russia against Europe and the US to channel Turkey’s needs.

Six years ago, at the opening match of the new Basaksehir Stadium in Istanbul, an unlikely soccer star emerged. The red team’s aging, six-foot center-forward lumbered toward the white team’s goal, and a delicate chip over the advancing keeper brought a goal that sent the stadium into ecstasy. The scorer was Prime Minister Recep Tayyip Erdogan. It was the run-up to an election in which he became his country’s 12th president.

For Erdogan, a former semi-professional footballer, it was brilliant self-promotion. Like Fidel Castro’s baseball pitching or Chairman Mao’s ‘world-record’ Yangtze river swim, Erdogan’s contrived sporting prowess helped make him as much a cult as a politician.

In the 18 years since his election victory as head of the Justice and Development party (AKP), he has used his cult of personality to overturn the institutional domination of the secular, pro-western followers of the Turkish Republic’s founder, Mustafa Kemal Ataturk, and morph Turkey into an authoritarian anti-European Islamic state.

Three current events — which all put President Erdogan at odds with the EU and the US — show the extent of Turkey’s transformation. In the eastern Mediterranean, in search of oil and gas, Turkey is seeking to carve up the area for its own benefit at the expense of Nato ‘allies’ Greece and Cyprus. As Erdogan’s deputy warned in June: ‘We are tearing up and throwing away maps of the eastern Mediterranean that imprison us on the mainland.’ Meanwhile, Erdogan is openly giving military support for his Muslim Azerbaijani confederate’s attempt to regain their Nagorno-Karabakh region from Christian Armenia, Turkey’s historic enemy.

But nothing shows the change in the Turkish-EU relationship more than Erdogan’s lambasting this week of President Macron as a man in need of ‘mental treatment’ for speaking against radical Islam after the beheading of French schoolteacher Samuel Paty. In leading the call for a boycott of French goods, Erdogan has thumbed a nose at not only France but also the West, describing Europe’s leaders as ‘links in the chain of Nazism’. How has it come to this?

The Islamification of Turkey was accelerated by the failed military coup in 2016. Some 50,000 arrests followed. The judiciary was purged of its Kemalists while the army, brought under nominal civilian control by Erdogan’s sleight of hand in 2004, was purged of its secular commanders. Opposition journalists were imprisoned. Erdogan called the failed coup a ‘gift from God’.

Concurrent with Erdogan’s transformation of Turkey’s constitution and its power structures, but less well understood by the western media, has been his so-called ‘neo-Ottoman’ foreign policy. Turkey’s international strategy since the Treaty of Lausanne in 1923 had been unwaveringly western-centric. This was even more the case after the emergence of the Soviet Union, which resulted in Turkey joining Nato as early as 1952 — some three years before Germany.

The fragmentation of the USSR changed everything. The Russian threat receded. France and Germany rowed back on the planned Turkish accession to the EU even though Turkey had been allowed to join the EU’s customs union in 1995. Erdogan was probably happy to have independence thrust upon him. With Turkey’s economy running hot from further deregulation and western credit, he felt confident enough to launch a swaggering neo-Ottoman foreign policy.

The results were initially catastrophic. Erdogan’s aim to replace President Assad’s regime in Syria with a Muslim Brotherhood-friendly government failed miserably. More importantly, in spite of Turkey’s support, Egypt’s Muslim Brotherhood leader, Mohamed Morsi, elected president in the aftermath of the toppling of President Mubarak in the ‘Arab Spring’, was in turn overthrown by a military coup.

Hostility to Erdogan’s interventions, particular from Saudi Arabia, was such that Qatar was the only Middle Eastern country to send a head of state to his presidential inauguration in 2014. EU nations were equally unimpressed. Erdogan’s increasing disdain for the West was shown by his support for a visit to Turkey by Khaled Mashal, Hamas’s military commander. As for Saudi Arabia, Erdogan exacted his revenge by revealing to the global media the ghoulish dismemberment of the dissident Jamal Khashoggi in the Saudi consulate in Istanbul.

If Erdogan’s policies in the Middle East were crassly religio-political in the early years of his rule, his foreign policy since May 2016, when he sacked his longtime political ally and foreign policy guru Ahmet Davutoglu, has been marked by ruthless pragmatism. Realpolitik is certainly needed to guide a country that has become of critical geo-political interest to all of the ‘big four’ superpowers (the US, China, Europe and Russia).

Turkey has control of several levers to use against the EU, the two most important being the Central Asian natural gas supply through Turkish pipelines, which Europe needs to reduce dependence on Russia, and control of the movement of Syrian refugees.

Turkey’s relations with Russia are similarly transactional. They are not natural friends; since the mid-17th century they have fought six major wars — seven if you include the Cold War. However, once Russia intervened militarily in Syria on the government’s side, Erdogan gave up his quest to overthrow President Assad. A spat over the shooting down of a Russian Sukhoi Su-24, after a respectable interval, was patched up. In return for compliance with Russian aims, Putin gave Erdogan a juicy bone to chew on by allowing him to clear out pockets of Kurdistan Workers’ party (PKK) terrorists in the Afrin salient and Kobane. Effectively Erdogan, in displacing hundreds of thousands of Kurdish civilians, has now created a 20- to 30-mile security zone inside Syria’s 565-mile border with Turkey. Eventual annexation of these areas seems likely.

There are more prosaic reasons for the informal Turkish-Russian pact. Russia sells $40 billion per annum of natural gas to Turkey; it has powered Turkey’s rapid industrial growth. Russians have also overtaken Germany in terms of tourist arrivals. Economically the two countries need each other.

Erdogan carefully plays Russia against Europe and the US to channel Turkey’s needs. When he narrowly escaped death in the 2016 coup attempt, Putin called him the next day. By contrast, Barack Obama remained silent even though he had named Erdogan as one of his five trusted international leader friends just four years earlier. Their relationship had cooled as Erdogan refused to help the Kurds to fight Isis in northern Syria. At the same time, western media turned against Erdogan’s increasingly autocrat behavior. Reading the runes, Erdogan dumped Obama in favor of Putin.

Erdogan achieved another remarkable switchback in his relationship with Donald Trump. In June 2016 Erdogan complained that ‘Trump has no tolerance for Muslims living in the US’ and urged the removal of his name from Istanbul’s Trump Tower. Since then Erdogan’s and Trump’s sons-in-law, finance minister Berat Albayrak and Jared Kushner respectively, have engaged in backdoor family diplomacy. The courtship paid off. Trump’s administration held off punishment of Halkbank, a state-owned company accused by the FBI of helping Iran to evade US financial sanctions. Obligatory US government sanctions on Turkey for buying Russian S-400 missiles, designed to shoot down Nato planes, have also been deferred. Most controversially, Erdogan persuaded Trump to withdraw US troops from Northern Syria, abandoning the Kurdish fighters who had battled Isis with the Americans.

The US relationship remains delicate however, and not just because Trump could lose next week’s presidential race. In recent months, relations with Greece and Cyprus, both historic enemies, have plunged to their lowest point since the Turkish invasion of Northern Cyprus in 1974, as the Turkish navy has harassed their exploration vessels. Mike Pompeo has twice visited Greece in the past year and given a coded warning that the US would use ‘all appropriate means…to safeguard stability and security in the wider region’. Most likely Erdogan’s threats are a hard-nosed negotiation tactic over exploration licenses.

But by far the most intriguing example of Erdogan’s transformation from a clumsy religious ideologue to a master of realpolitik has been his recent dealings with China. Erdogan used to be a staunch critic of China’s treatment of the Turkic-speaking Uighurs of Xinjiang Province. Now he has become their persecutor. The arrest of hundreds of Uighurs resident in Turkey followed the signing of an extradition agreement in 2017; an event that reveals the absurd hypocrisy of Erdogan’s berating of President Macron for his recent Islamic comments.

Turkey’s economic rewards from China have been potentially regime-saving. When the Turkish lira crashed by 40 per cent two years ago, it was China rather than Europe and America that bailed it out with a $3.6 billion loan. A slew of Chinese investments and other financial support has followed, particularly for transport infrastructure related to China’s ‘New Silk Road’. A Chinese consortium has paid $688 million for a majority stake in the Yavuz Sultan Selim Bridge, for road and rail, that crosses the northern Bosphorus. In addition, the China Cosco Shipping Company and other state actors have bought a 65 percent holding in a giant container terminus in Istanbul. As Xi Jinping stated last year, this is part of a master plan to ‘further boost the throughput capacity of China’s fast sea-land link with Europe’.

Given the inroads that Russia and China have made in Turkey, does this mean that Erdogan has permanently severed the almost century-long relationship of subservience to Europe? Probably. It is clear that the EU, bereft of a global geopolitical plan and hampered by a sclerotic political and bureaucratic structure, has failed to tie in countries at its geographic periphery. Meanwhile Erdogan, the former soccer player, has learned how to play the game of political ‘keepie uppie’ with all the skill of a Ballon d’Or winner.