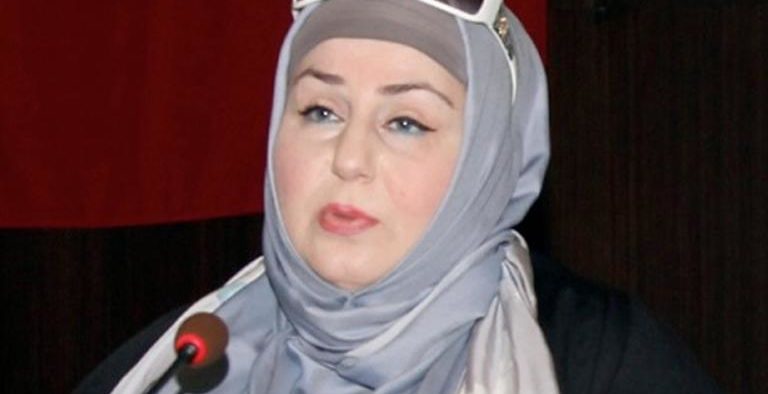 Yılmaz had started a social media campaign on Twitter against Gökhasan’s release in May. Gökhasan was arrested on March 8, 2017 on charges of links to the Gülen movement, a faith-based group inspired by Muslim cleric Fethullah Gülen, and was sentenced to six years, 11 months in prison. His case was awaiting review by the Supreme Court of Appeals.

In one of her tweets Yılmaz called on Turkey’s Constitutional Court and Justice Minister Abdülhamit Gül to prevent the release of Gökhasan. President Recep Tayyip Erdoğan and Interior Minister Süleyman Soylu were also tagged in the tweet. “Do not let FETÖ [a derogatory term coined by ruling Justice and Development Party (AKP) to refer to the Gülen movement] member Ümit Gökhasan, who was dismissed [from his job] by a [government] decree, be released,” Yılmaz said.

The Turkish president has been targeting followers of the Gülen movement since the corruption investigations of December 17-25, 2013, which implicated then-Prime Minister Erdoğan, his family members and his inner circle.

Dismissing the investigations as a Gülenist coup and conspiracy against his government, Erdoğan designated the movement as a terrorist organization and began to target its members. Erdoğan intensified the crackdown on the movement following a coup attempt on July 15, 2016 that he accused Gülen of masterminding. Gülen and the movement strongly deny involvement in the abortive putsch or any terrorist activity.

Following the failed coup the Turkish government declared a state of emergency and carried out a massive purge of state institutions under the pretext of an anti-coup fight. Over 130,000 public servants, including 4,156 judges and prosecutors as well as 20,571 members of the armed forces were summarily removed from their jobs for alleged membership in or relationships with “terrorist organizations” by emergency decree-laws subject to neither judicial nor parliamentary scrutiny.

Gökhasan was first diagnosed with stomach cancer in January 2020. He underwent surgery on February 13, 2020 in which his stomach and part of his esophagus were removed. He was sent back to prison two weeks later and began receiving chemotherapy.

His treatment was stopped due to the COVID-19 pandemic, after which the cancer spread to other parts of his body. His wife tried to make his problems heard by authorities, but to no avail.

Gökhasan’s death was announced by his wife, Şükran Gökhasan, on her Twitter account. She told Bold Medya the details of his last moments. “My husband lost consciousness around 1 a.m., and he died shortly thereafter,” she said. “He suffered greatly.”

People affiliated with the Gülen movement have been facing discrimination, hate speech and persecution in Turkey since the corruption investigations of December 2013. According to the Stockholm Center for Freedom’s May 2017 report, “Erdoğan’s Campaign of Hate Speech Case of Targeting the Gülen Movement: 2013-2017,” President Erdoğan himself developed a unique vocabulary of 240 hateful slurs and insults that singled out the Gülen movement, including a malignant tumor that poses a great threat to humanity, blood sucking leeches, viruses, hashashins and lunatics.

Vilification and demonization of the movement reached its climax in the aftermath of the abortive putsch of July 2016. In a public rally in August 2016, then-Minister of Economy Nihat Zeybekci told thousands of pro-government supporters in front of the cameras that “we will make them beg. We will stuff them into holes, they will suffer such punishment in those holes that they will never see God’s sun as long as they breathe. They will not hear a human voice again. ‘Kill us’ they will beg.”

In a recent example, Sevda Noyan, a writer and staunch supporter of President Erdoğan, said on the pro-government Ülke TV last May that she and her family were caught by surprise in the July 15 coup attempt but that they were equipped for any similar future incident and could take out 50 people. Noyan also admitted that they had already made lists of the neighbors that they would target in such a case.

Muttalip Kutluk Özgüven, a professor of communications, went so far as to suggest that supporters of the Gülen movement should be sent to rehabilitation camps and subjected to psychological treatment. Özgüven’s controversial remarks came during a program on the pro-government Akit TV.

The professor complained that the fight against the movement was not being adequately conducted. He also said these people had earlier taken advantage of benefits from the Turkish state such as public education, so they have to serve the state. “Their bodies do not belong to them. They have to serve Turkey’s interests. So I can’t accept these people being against the state. We have not used psychological methods on them,” he said.

The COVID-19 pandemic has fueled this kind of speech. The pandemic is portrayed by the country’s pro-government “experts” as a tool of biological warfare, a selective or smart virus developed by Zionists, Westerners/dominant powers and people affiliated with the Gülen movement or the Rockefeller family in order to “subjugate intransigent countries to their will,” “redesign the world,” “launch chaos in the country,” “create ‘Lego’ religions” or “occupy minds.”

Any kind of negative development in the country is immediately projected on minorities and members of the Gülen movement. President Erdoğan himself made a habit of using the same political language whenever he found himself in a political bind. Dehumanizing a persecuted faith-based group such as the Gülen movement and others to this end is quite permissible in his playbook.