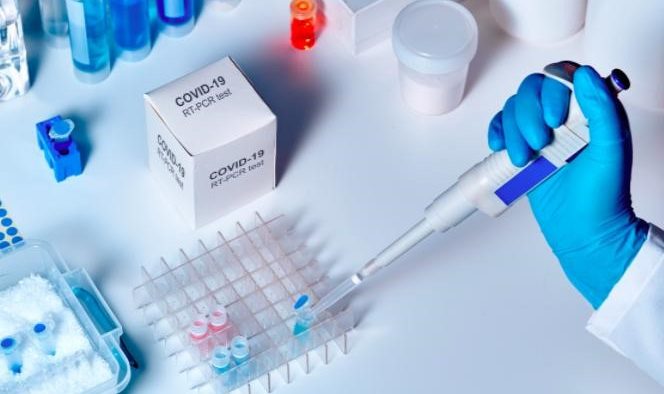 No matter what anybody’s personal feelings or beliefs are about the Covid-19 pandemic, one truth we should all embrace is that we are awash in a sea of lies. Whether from mainstream, alternative, or my personal favorite “oﬃcial” sources, the generally accepted narrative just doesn’t seem to match reality. And with more and more credible and verifiable data coming to light each day, how long before we see a seismic shift in the Covid saga in one direction or another?

The latest and possibly the most consequential pandemic topic brewing is with the very “Covid test” itself. Polymerase Chain Reaction, commonly known as PCR, was invented by one Dr. Kary Mullis, who subsequently won the 1993 Nobel Prize in chemistry for this achievement. I won’t pretend to have a thorough understanding of biochemistry, virology, or any science for that matter. As it turns out, we really don’t need to. It’s not about trusting the science. It’s about which scientists to trust.

“With PCR, if you do it well you can find almost anything in anybody.” Dr. Kary Mullis

“If you get a cycle threshold of 35 or more…the chances of it being replication-competent are minuscule.” Dr. Anthony Fauci

Dr. Mullis, who passed away in August of 2019, had plenty to say about PCR, on the record. Not to mention a host of other doctors, scientists, and academics, most notably, one Dr. Anthony Fauci.

As a video interview with Dr. Mullis displays, he was no fan of Dr. Fauci. In fact, the Nobel laureate described the NIH (National Institute of Health) director as a ‘fraud’ who had no problem looking into a television camera and lying. So with Mullis dead and Fauci enjoying rock-star status from the western media and its faithful followers, who are we to believe? Well, let’s get Fauci’s direct statement on PCR from last July:

“…If you get a cycle threshold of 35 or more…the chances of it being replication-competent are minuscule…you almost never can culture virus from a 37 threshold cycle…even 36…it’s just dead nucleoids, period.”

So, what does this science-speak mean? He is referring to the cycle threshold (CT) of the test. Basically, if you amplify a DNA sample enough times, you can find just about anything in anybody.

For example, if I stood next to someone smoking marijuana for 30 seconds, it is feasible that a PCR would find THC (the psychoactive molecule in cannabis) in my test if it were amplified enough times. That’s why it is critical to know what the CT number is of the test, and it varies apparently from place to place, a lot. Fauci’s above statement essentially says if the CT is above 35, it won’t find active virus. It will yield small dead particles of a virus of yore. It is useless and ineﬀective. The CT value used in the US at the time of his comments was 40 in many states. In Ireland, it’s 45. Only recently, the State of Florida ruled that all CT numbers must be documented from all tests. What this suggests is that the false positive test returns could be astronomical and the overall death count could be far less. In short, anyone with a cold, flu, or no symptoms at all is potentially labeled a “case.”

In a sane, rational and logical world, the statement that the World Health Organization gave in a guidance memo on December 14 would flood the mainstream media airwaves of every country, but instead, we get the familiar crickets. Here are two direct quotes from the WHO memo:

“Users of RT-PCR reagents should read the IFU carefully to determine if manual adjustment of the PCR positivity threshold is necessary to account for any background noise which may lead to a specimen with a high cycle threshold (Ct) value result being interpreted as a positive result.”

“The design principle of RT-PCR means that for patients with high levels of circulating virus (viral load), relatively few cycles will be needed to detect virus and so the Ct value will be low. Conversely, when specimens return a high Ct value, it means that many cycles were required to detect virus. In some circumstances, the distinction between background noise and actual presence of the target virus is diﬃcult to ascertain.”

Translation; the technicians using the PCR must set the CT threshold properly to compensate for background noise. Yes, it is that sensitive. But moreover, how about following the guideline voiced by the so-called experts, which is under 35 CT? If we are looking for contagious people, countless doctors and scientists would attest that a standard in the area of about 25 CT’s would be more appropriate. This has not been happening, and the basic questions are never asked by the media with direct access to health oﬃcials. Why? It seems fundamental enough, but that’s where the glaring reality of the media and governments paralleling in either extraordinary incompetence or complicity. What else could it possibly be? How could top health oﬃcials of any country overlook such a vital requisite component in determining the accuracy of diagnosing the virus responsible for a pandemic?

TECH TYRANNY AND THE NEW OVERLORDS

While most of us would love to wake up from the nightmare of 2020 with a clean slate, some changes have been indelibly set on a course that can only lead to more extensive top-down authoritarian control by governments (see Rockefeller Foundation “Lockstep” 2010). To lazily dismiss this glaring reality as “conspiracy theory” is no longer worth the breath of uttering such a vapid label. If people aren’t recognizing the expanding control over the narrative and in turn, the perception of the masses, they simply aren’t paying attention. And are arguably more “conspiracy theorists” than those of us that take the time to seek out verifiable data and credible sources. What’s actually happening is hundreds of thousands of dissenting voices in the medical and scientific communities are being censored, banned, removed, and de-platformed nearly as fast as their information is released on the major social network sites. If people haven’t taken the time to even casually look into Event 201 or The World Economic Forums Great Reset in their raw forms, their perspective is likely confined to the narrow and repetitive programming tools of 6 major media corporations. There is no nobility in willful ignorance during such a pivotal time in our collective history. Oh and beware of the “fact-checkers” that are contracted by mainstream and social media outlets to fact-check themselves. They are the paid protection for stenographers of oﬃcial narratives.

There are of course, hundreds of court cases being filed everyday across the western world regarding Covid related restrictions. From overreaching and unproven lockdown measures to PCR itself. Unsurprisingly, mainstream media remains silent on true public interest and heavy of propagandistic narrative management. However, in what is seen as a shot across the bow for PCR skeptics, judges in Portugal ruled in late November that the test was unreliable in a case regarding quarantining of tourists. They quoted a paper from The Lancet as follows:

“To summarise, false-positive COVID-19 swab test results might be increasingly likely in the current epidemiological climate in the UK, with substantial consequences at the personal, health system, and societal levels (panel).”

So, with just a few basic examples, any clear-eyed, thinking person should want to know more about what is going on with all of this. At the very least we should wonder what Dr. Mullis meant by comments such as these:

“Fauci doesn’t know anything about anything, and I’d say that to his face.”

“..those guys (NIH) have got an agenda which is not what we would like them to have being that we pay them to take care of our health…”

Why is PCR being used with no apparent standard for CT values? And if there are standards in certain countries, what are they? These are very elementary questions that would disrupt the mainstream narrative about the number of “cases” which are being used as a justification for some rather draconian measures by governments across the western world in particular. Let’s not lose sight that the overall survival rate in the US is roughly 99.9% for all infected persons under the age of 70 (CDC Oct 2020). Yes, there are so many details and questions to ask, but why not just simply put to our health oﬃcials some direct questions about PCR? The answer could change the entire saga of this ever mysterious and potentially ordinary coronavirus. Wouldn’t that be good news?

Scott Garry is an American writer/musician and expat language teacher.