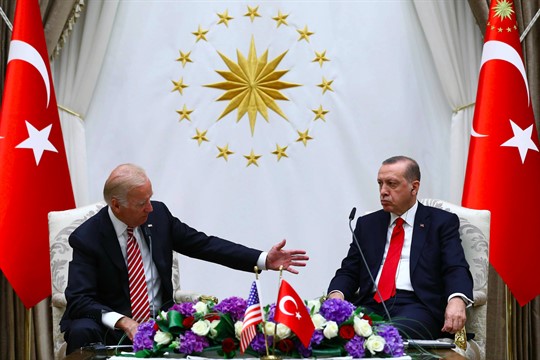 As President-elect Joe Biden prepares to take office later this month, many U.S. allies and partners are eyeing an opportunity for better relations with Washington. But Turkey, under the leadership of President Recep Tayyip Erdogan, will face an uphill battle to settle its ongoing disputes with the United States, not to mention its other NATO allies.

There are three major impediments to a reset in Turkey’s ties with the West. First, the U.S. remains at loggerheads with Turkey over Erdogan’s decision to purchase an advanced missile defense system from Russia. Second, the European Union is considering tough sanctions against Ankara over its drilling activities in the Eastern Mediterranean, in waters that are also claimed by Greece and Cyprus. And third, even independent of those external pressures, Erdogan’s government will likely continue to undermine the U.S. and the EU as part of his domestic campaign to keep Turkish voters on his side by galvanizing nationalist sentiments.

Earlier this month, the Trump administration imposed narrowly targeted but nonetheless stinging sanctions against Turkey in response to its acquisition of the Russian-manufactured S-400 missile defense system in 2019. The sanctions, which targeted Turkey’s defense industry, were required by the 2017 Countering American Adversaries Through Sanctions Act, known as CAATSA. Congress, angered by the delay, included a provision requiring the sanctions be imposed within 30 days in the annual defense bill that it overwhelmingly passed last month.

Erdogan’s decision to purchase the S-400 platform has long faced fierce resistance from the U.S. and NATO, as the system is incompatible with the alliance’s existing defense infrastructure. Its advanced radar could also collect sensitive information about NATO capabilities—most notably, the newly deployed F-35 stealth fighter jets. Erdogan has paid a steep price for his insistence on keeping the S-400. Following delivery of the first Russian missile batteries to Turkey in mid-2019, the U.S. took the unprecedented step of removing Turkey from the F-35 program and canceling its planned shipment of around 100 of the jets.

Compared to that move, the recent sanctions under CAATSA were much more limited in scope, to prevent broader damage to the Turkish economy. They will mainly curtail the Turkish armed forces’ access to American military hardware. Still, they reflect mounting animosity toward Turkey among U.S. lawmakers. Unless Turkey dramatically alters its course under the Biden administration, it is unlikely that the U.S. government will lift these sanctions, isolating Turkey within NATO.

The incoming Biden administration is also likely to more aggressively pursue outstanding criminal cases against Turkish entities that had stalled or slowed under President Donald Trump, which could further embitter bilateral relations. In October 2019, U.S. federal prosecutors indicted Halkbank, a major Turkish state-owned lender, for its alleged involvement in “a multibillion-dollar scheme to evade U.S. sanctions on Iran.” But prior to the indictment, Trump had apparently yielded to pressure from Erdogan to hold off on pursuing the case, and his Justice Department only granted permission to press charges against Halkbank after Erdogan ordered Turkish troops into Syria, provoking a backlash from the U.S. In June, the top federal prosecutor in Manhattan, Geoffrey Berman, was fired, reportedly for his refusal to grant a favorable settlement to Halkbank that involved immunity for individuals suspected of involvement in the case.

Without significant policy and behavioral changes from Erdogan, Turkey is likely to encounter further punitive measures from the U.S. and the EU.

Berman’s successor, who will be appointed by Biden’s attorney general, will certainly see this case through to its conclusion. If Halkbank is convicted, it could face dire financial consequences, with fines in the billions of dollars, and the ripple effects would be felt throughout the Turkish economy. U.S. prosecutors could also indict Halkbank executives and other individuals involved in facilitating the suspect transactions.

Erdogan has lobbied hard to deter such moves, and is reported to already be reaching out to the Biden team. But it is unlikely that Biden would intervene in the Halkbank case, given his desire to restore the Justice Department’s independence after Trump. Biden has also pledged to rebuild America’s reputation among its allies and partners as a champion of robust democratic institutions and the rule of law. This means that in both the Halkbank case and the S-400 dispute, the onus will be on Erdogan to improve relations with the U.S. Bold gestures, such as terminating the S-400 acquisition and offering to settle the Halkbank case on terms that are agreeable to career prosecutors in Biden’s Justice Department, would go a long way.

However, Erdogan is unlikely to do so given his persistently negative attitude toward the U.S. and the West, often blaming them for Turkey’s problems. Partly due to this history of harsh rhetoric, 48 percent of Turks now identify the U.S. as the biggest threat to their country, according to a recent survey.

A similar view prevails toward the EU, which is threatening to hit Turkey with sanctions due to its aggressive moves in the disputed waters of the Mediterranean Sea. Throughout 2020, Erdogan’s government has expanded and acted upon its expansive claims over drilling rights for oil and gas deposits in the Eastern Mediterranean seabed. Turkey is particularly hostile toward Greece and Cyprus, accusing the former of trying to transform the Aegean Sea into a “Greek Lake,” owing to the multiplicity of Greek islands that Athens claims each have their own exclusive economic zone extending 200 nautical miles outward.

Erdogan has pushed back hard against Greece’s claims by deploying deep-sea exploration vessels to disputed waters, escorted by elements of the Turkish navy. Other European countries, particularly France, have responded by sending their own naval vessels to aid Greece and Cyprus, raising tensions and even sparking fears of a military altercation at sea. While Erdogan knows the standoff is damaging his relations with both the EU and the U.S., he prefers to keep Turkish public opinion focused against the West. Although this appears to be a shortsighted strategy, it is of vital interest to Erdogan, who needs to shore up his support at home if he hopes to maintain his grip on power.

The Turkish government remains deeply worried at the prospect of a Biden administration that has pledged to restore America’s position on the world stage by working closely with its European allies. For Turkey to be included under this umbrella, significant policy and behavioral changes would be required from Erdogan, unlikely as that prospect may be. Without such changes, Ankara is likely to encounter further punitive measures in the form of sanctions, resulting in further economic, diplomatic and military isolation.

By: Sinan Ciddi – an associate professor of national security studies at the Command and Staff College, Marine Corps University, in Quantico, Virginia.