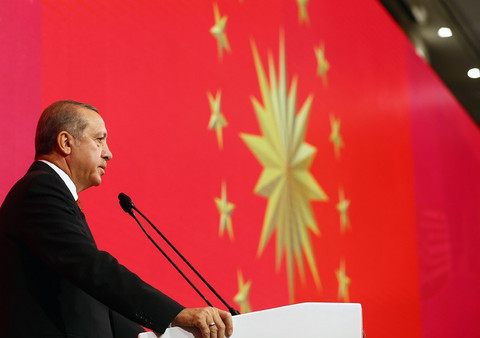 Turkey held out a grand olive branch to the EU when president Recep Tayyip Erdoğan met ambassadors in his Ankara palace on Tuesday (12 January).

“We are ready to put our relations back on track and we expect the EU to show the same determination,” he said in a speech to all the EU states’ envoys in his Çankaya presidential complex.

“The Mediterranean is our shared home and the roof of our big family,” Erdoğan said.

“We, as a nation, envision our future together with Europe. In this spirit, we have been engaged in a struggle for full membership to the union for nearly 60 years. We have never given up,” he added.

He looked forward to the EU, one day, accepting Turkey as a “rightful” member, in what would make up for losing the UK, he said.

He was “ready to show the same will again for the joint management of migration” as he had done by keeping millions of mostly Syrian refugees from going to Greece in recent years.

And he underlined Turkey’s value to Nato in fighting jihadists in the Middle East.

Erdoğan’s speech came after the US and EU recently imposed sanctions over his purchase of a Russian air-defence system and his gas-drilling in Cypriot waters.

He has also clashed with Greece over maritime claims and with France, by sending troops to Libya and by verbally attacking the French leader over Mohammed cartoons.

All that, coupled with Erdoğan’s abysmal human rights record inside Turkey, has led to a nadir in relations between the Western allies.

And Erdoğan, for all his talk of rapprochement, also set out a laundry list of EU wishes at Tuesday’s talks.

He demanded that EU states shared hydrocarbon resources with Turkey in the eastern Mediterranean, while rejecting current “maximalist maps that have no validity”.

He called for EU help in handing over what he called “Feto-member terrorists”, a catch-all term for his political enemies, many of whom have sought asylum in Europe.

And Erdoğan listed “updating the Customs Union” and “providing visa liberalisation to Turkish citizens”, as well as restarting EU accession talks, among his priorities.