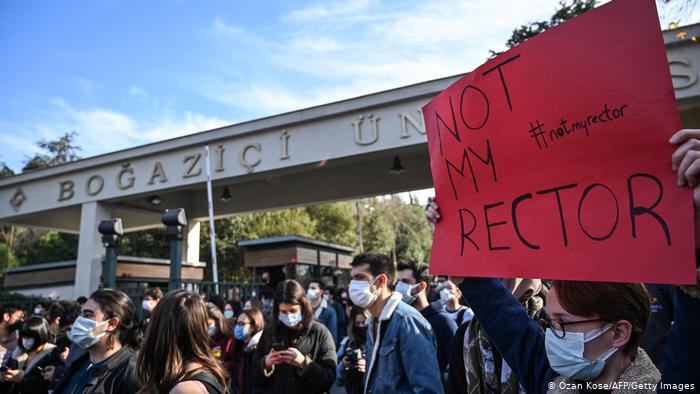 Turkish President Recep Tayyip Erdogan fears the protests that have erupted at Istanbul’s Bosphorus University (also known as Bogazici University — Editor’s note) against his totalitarian rule. He has retaliated with an iron-fisted approach.

In the 1990s, I studied at Bosphorus University, which is situated on the European side of the city and offers English-language teaching. During this time, I worked as an assistant to professor Ustun Erguder, the institution’s rector at the time.

A bastion of liberalism

Bosphorus University is one of Turkey’s few remaining bastions of democratic and liberal thought. Its resilient faculty and critically minded students are a thorn in Erdogan’s side; they are the sort of forces he wishes to purge from Turkey. The university is a safe haven for liberals, anarchists, feminists, LGBTQI+ activists, Kurds, the left, atheists and even — to Erdogan’s horror — pious Muslims, who fear no one except Allah.

They study and teach side-by-side at this university, on this beautiful campus, near River Bosphorus. And they reject the new Erdogan-appointed rector, Melih Bulu, arguing he committed plagiarism, which disqualifies anyone from leading one of Turkey’s top universities. It has also emerged that he used to be an active member of Erdogan’s ruling AKP party and in 2009 considered running as mayor. It is evident that Erdogan wishes to install Bulu to control this elite institution. But that won’t work.

For weeks, lecturers and students have been staging midday protests, lining up outside with their backs to the rector’s office. These days, Bulu must be the loneliest rector in the entire world.

Erdogan is angered by such resistance. And by staging creative protests and posting online videos, the students are attracting ever more public attention. Students at other universities have already expressed solidarity with them. Erdogan, in turn, has brought in the police to crush such protests. Hundreds of students were temporarily arrested; four remain in custody.

Erdogan and Devlet Bahceli, who heads Turkey’s nationalist MHP junior coalition partner, lash out against the students almost daily, branding them “terrorists.” In an effort to further delegitimize the protests. Erdogan has even resorted to stoking homophobia, claiming “there is no such thing as LGBT.” AKP Interior Minister Suleyman Soylu, meanwhile, called the movement “revolting.”

Erdogan is resorting to violence because he fears a movement akin to the 2013 Gezi park protests. He is desperately trying to delegitimize the students as he worries they could vote him out in the 2023 election. He is on to something: within two years, 5 million young Turks will have reached voting age, comprising about 12% of the total electorate. Only a small faction would cast their ballot for the president — that much is clear from the thousands of dislikes and negative comments Erdogan’s 2020 YouTube live stream attracted.

Various surveys show that Turkey’s Generation Z has little sympathy for Erdogan and his ideas. According to one poll by the Gezici Arastırma Merkezi institute conducted last year, 76.4% of respondents said they regard the rule of law and democracy as top priorities for Turkey. A mere 15.7% of Generation Z voters say they regularly pray — bad news for Erdogan, who aims to make Turkey more pious. On top of it all, a MetroPoll poll found that 55% of AKP supporters favored university rectors to be democratically elected, rather than appointed by the president.

How much more brutal will Erdogan get?

Bosphorus University rector Bulu insists he will not resign — which he cannot anyway, unless Erdogan replaces him with someone else. So Bulu hopes the protests will slowly dissipate.

Erdogan’s brutal police crackdown will prevent a second Gezi park uprising. But this violence will not change the minds of Turkey’s young. The more force the president marshals, the sooner his downfall will come. The question is: how much more violent can Erdogan become in years to come?

By: Banu Güven – a Turkish journalist and television presenter. She writes for various German and Turkish media outlets. She has been living and working in Germany since 2018.