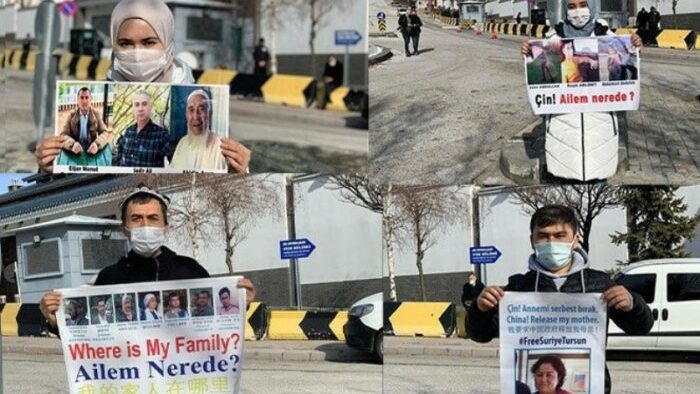 Uyghurs living in Turkey are continuing their protest outside the Chinese Embassy in Ankara, demanding information on family members held at internment camps in Xinjiang amid accusations of systematic rape in those camps.

According to Turkish media reports, the protestors wanted to share the files of 5,199 people who are still kept in Xinjiang camps, but Chinese diplomats refused to accept them.

“We will not spare any opportunity to reveal China’s genocide against humanity,” Mirzahmet Ilyasoglu, representing the Uyghur protestors, told Turkey’s state-run Anadolu news agency, adding that they would stay in front of the Chinese Embassy “until the detainees in the camps are released.”

It is estimated that more than a million Uighurs and other minorities have been detained in camps in China.

One woman told the BBC that women were removed from their cells “every night” and raped by Chinese men. Tursunay Ziawudun, who fled the region after her release, said she was tortured and later gang-raped on three occasions, each time by two or three men.

Turkey has been a destination for thousands of Uyghurs fleeing China and has become home to a sizable Uyghur diaspora. But a Turkey-China extradition treaty signed in 2017 that is still awaiting ratification by the Turkish parliament led to fears that it could be used to target Uyghurs living in Turkey.

In May 2020 Nordic Monitor released the text of the treaty and underlined ambiguous phrases that violate international extradition mechanisms.

Turkish police raided the homes of some Uyghur refugees on the night of January 18 and detained between 10 and 15 of them. According to the members of the Uyghur diaspora, they were detained for their alleged ties to terrorist groups but have never been involved in terrorist activities.

Amine Bekir, 40, was among the Uyghurs detained. According to her daughter Aliye Bekir, she was first taken to a police station and then to a removal center in the Silivri district of İstanbul. She was released the following night. Abdullah Metseydi, who was working as a tailor in Istanbul, was another Uighur arrested that day.

According to his wife Melike, who spoke to Radio Free Asia’s Uyghur service, the police asked Abdullah Metseydi if he had ever called for jihad against China. He said, “No, I’ve never heard of any such thing.” In response, the police said he would be deported directly to China together with his wife if he was ever involved in any such activity. When she asked when her husband would be back, one of the officers said he would be sent back to China.