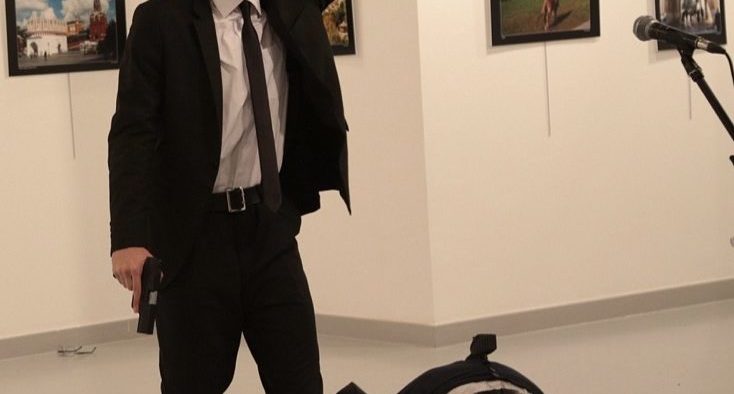 Turkish authorities turned down a Russian government request to run a lie detector test on a key suspect whom Turkey claimed to be complicit in the assassination of Russian Ambassador Andrei Karlov in 2016, casting further suspicion on the credibility of the Turkish investigation and murder case.

The rejection by Turkey came despite the fact that the suspect, Mustafa Timur Özkan, who repeatedly said he had nothing to do with the murder, volunteered to undergo the Russian government lie detector test, eager to prove his innocence. The revelations were made in Özkan’s defense statement, a copy of which was obtained by Nordic Monitor, which was delivered to the court on January 8, 2019.

“The Russians want to hook you up to a lie detector, but I’m not giving you to them,” said public prosecutor Adem Akıncı when interrogating Özkan, a 64-year-old retired architect and avid traveler. “I told him I wouldn’t hesitate to take a lie detector test and that if it was OK with him, I’d volunteer to get hooked up to it.” Özkan recalled of his conversation with the prosecutor.

The conversation took place on November 14, 2017 in Akıncı’s Ankara office at the prosecutor’s request and interestingly without the presence of Özkan’s attorney, which violates the Code on Criminal Procedure (CMUK). Özkan said he later reported the content of the conversation to his lawyer by email.

Özkan’s testimony dealt yet another blow to the Turkish government’s storyline that the Gülen movement, a group critical of it, was behind the assassination. The evidence collected during the course of the investigation portrayed a radicalized police officer who wanted to quit his job to go to Syria to fight alongside jihadists and had been in contact with radical Turkish government imams and al-Qaeda-linked groups as well as President Recep Tayyip Erdogan’s family cleric Nurettin Yıldız, a radical preacher who openly endorsed armed jihad and frequently attacked Russia in his fiery sermons.

The Turkish prosecutor ignored all these leads; did not indict any radical figures who had been in contact with the assassin in the months leading up to the assassination; and deliberately deflected the focus of the probe away from people close to the Erdoğan government. Instead, the Gülen movement and others were scapegoated with no evidence presented by the prosecutor to support the allegations.

Özkan was the organizer of the art exhibition at which the Russian envoy was assassinated by al-Qaeda-linked police officer Mevlüt Mert Altıntaş on December 19, 2016. He said he planned the exhibition in close coordination with the Russian Embassy and denied the prosecutor’s claims that the exhibit was ordered by the Gülen movement to set the stage for the murder.

“Neither I nor the exhibition had anything to do with the movement,” he said, underlining that the prosecutor had clearly made up the story about the incident, manipulated the events and falsely accused him of being an accomplice to the murder without offering any evidence to support his claims in the last three years. Özkan recalled how Akıncı had told him in his office that he would easily fill in the blanks when Özkan objected to the allegations, pointing out the holes in the prosecutor’s claims.

“I’m standing before you as an accused because the prosecutor filled in the blanks” in the indictment by manipulating the evidence, Özkan told the panel of judges during his defense testimony.

Özkan has written or edited over 25 travel books, organized 20 different exhibitions and published some 500 articles on travel and the history of Ankara. He has traveled the world and even registered for space travel with a US company for a future tourist journey. He explained in detail how the idea of the exhibition came to fruition in the first place. He said he first held the exhibition in Moscow to promote Turkey in 2011 with the Turkish ambassador inaugurating the event and planned to the hold a reciprocal exhibition in Ankara to promote Russia. But the second exhibit could not take place because he could not find a sponsor and had been busy with his book and other exhibits.

He proposed the exhibition to the Russian Embassy on February 12, 2016, but it was rejected because of the strained ties between the two countries at the time over Turkey’s shooting down of a Russian fighter jet in 2015 on the Turkish-Syrian border. As Turkey and Russia tried to normalize relations, with President Erdoğan offering a formal apology for the incident, he received a call In August 2016 from the embassy which stated that his proposal had been approved and that the embassy would sponsor the exhibition.

“The photo exhibition at which the deplorable assassination took place was not the act of a [terrorist] organization. There’s no evidence of that. It couldn’t have been any, anyway … because the exhibit was entirely my project and was an event we coordinated with the Russian Embassy and was hosted by the Çankaya Municipality with the sponsorship of the embassy,” he said.

The exhibition was originally planned for December 16, and the brochure published by the Çankaya Municipality Contemporary Arts Center (Çağdaş Sanatlar Merkezi, ÇSM) advertised it as such and announced it to the media as well. However, the Russian Embassy later wanted to have a special opening for their own guests with a cocktail reception either a day before the exhibition opened to the public or a day after, according to Özkan.

The ÇSM did not object as long as the exhibition opened for the public on the 16th as planned. Özkan looked into the 15th, the day before, but the hall was scheduled for painting that day and it was ruled out. The day after was Saturday, and the Russian Embassy reception had to be pushed to Monday the 19th at the request of Russian embassy officials.

The assassin police officer learned about the exhibition as it was advertised for 16th and made a reservation at a nearby hotel on December 14 for an overnight stay on the 16th. But he changed the reservation to the 19th after he scouted the gallery on the 15th to familiarize himself with the layout of the building. According to the indictment, which included CCTV footage from the venue, he was at the gallery from 20:00 to 21:30 on December 15. He most likely learned about the change of date when he was there.

The prosecutor claimed Özkan informed the assassin about the change of date but provided no evidence to support this very serious allegation. In his defense Özkan said he knew about the change of date before the assassin made the first hotel reservation, adding that if the killer had gotten the information from him as the prosecutor alleged, he would have made the reservation for the 19th and would not have had to change it after learning about it during his first visit to the gallery.

Özkan’s defense is not the only statement that undermined the prosecutor’s case during the trial. Nordic Monitor previously published documents that showed how Turkish intelligence agency MIT helped the prosecutor set up another false suspect in the case to deceive a Russian delegation that was scheduled to visit Turkey for a fact-finding mission.

The scheme, apparently designed to derail the probe and divert Russian authorities’ attention away from the evidence that in fact pointed to elements in the Erdoğan government, was exposed at a hearing on September 4, 2020 by a victim who was abducted and tortured by the intelligence agency.

The 38-year-old victim, Hüseyin Kötüce, had been tortured for months to extract a false confession and was then turned over to the prosecutor’s office for arrest before the Russian delegation came to Turkey. “I told Adem Akıncı [the investigating prosecutor] that you’re trying to place me in the Karlov murder case, but you know I had nothing to do with it. The prosecutor said: ‘Hüseyin, I can’t do anything for you. There’s a delegation from Russia coming in this week, and I have to arrest you. There’s a lot of pressure on me. You take the stand in court and [try to] clear your name there’,” Kötüce told the panel of judges at the Ankara 2nd High Criminal Court.

The cell phone records, bank wires and computer logs obtained for the assassin Altıntaş as well as witness statements all pointed to several radical clerics who either worked for the Turkish government’s religious authority, the Diyanet, or were long supported by the office of President Erdoğan.

The prosecutor’s claims collapsed when the trial started and key defendants recanted their earlier statements extracted under duress and submitted medical reports to prove they had endured torture and ill-treatment until they agreed to sign false statements. Many government witnesses did not show up for cross-examination despite repeated motions from the defense lawyers and defendants. Those who appeared in court provided conflicting statements, while some recanted earlier statements they had given to the police.

There are a number of pieces of evidence in the case file that show the killer was in fact radicalized by jihadist literature, attended prayer circles organized by pro-government jihadist cleric Yıldız and had been befriended by known al-Qaeda militants. However, the government did not pursue the leads into jihadist networks and did not investigate the al-Qaeda figures who had worked with the killer. It was also revealed that the Erdoğan government rewarded the killer with 34 bonuses in two years’ time.