Human rights not protected in Turkey due to gov’t control over judiciary: report

Human rights not protected in Turkey due to gov’t control over judiciary: report 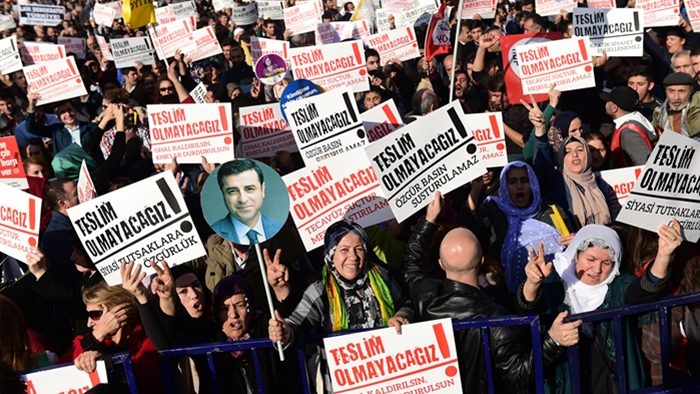 A report authored by Italian judge Luca Perilli and recently published by the Turkey Tribunal, a civil society-led symbolic international tribunal to review and deliver judgment on Turkey’s human rights record, has shown that fundamental rights are not protected in the country mainly due to political control of the judiciary.

The report, titled “Judicial Independence and Access to Justice in Turkey Today,” covered Perilli’s examination of actions by the authorities since 2010 that relate to the role of the Turkish judiciary and the abrupt changes that have shaken it since 2013.

Although Turkey adopted important constitutional reforms that reinforced the independence of the judiciary with the aim of aligning Turkish justice with the standard of European democracies between 2010 and 2013, the violent reaction by the police to the 2013 Gezi protests revealed the authoritarian nature of the Justice and Development Party (AKP) in 2013, Perilli said.

“December 2013 signs the start of the race to the bottom for the rule of law in Turkey,” he continued, referring to a corruption scandal implicating then-Prime Minister and current President Recep Tayyip Erdoğan, his family members and his inner circle, after which the AKP decided to shake up the independent Supreme Board of Judges and Prosecutors (HSYK) and assert political control over the judiciary.

Perilli listed many steps taken by the government in the aftermath of a 2016 coup attempt in Turkey, when Erdoğan intensified the crackdown on non-loyalist citizens under the pretext of an anti-coup fight, as reasons that hinder access to justice in Turkey.

Persecution of lawyers and human rights defenders, unjustifiable limitations of the right to a defense, legal and factual impediments to access to evidence by defendants, disruption of fair trial rules and misuse of detention are among the reasons pointed out in the report.

Political control over the judiciary makes judicial remedies ineffective, the judge also said, with decisions to release detainees not executed, decisions of the Constitutional Court not respected and landmark judgments of the European Court of Human Rights disregarded and not enforced.

Perilli also referred to the government-led purges targeting real and alleged members of the Gülen movement, inspired by the teachings of US-based Muslim cleric Fethullah Gülen, which is regarded as a terrorist organization by Ankara and accused of masterminding the 2016 abortive putsch.

Despite the strong denial of Gülen and his followers of any involvement in the coup attempt or in any terrorist activity, more than 130,000 public servants, including 4,156 judges and prosecutors, were summarily removed from their jobs for alleged membership in the faith-based group in the aftermath of the attempted coup.

The judge also listed 11 significant examples in which suspects’ presumption of innocence was disregarded and they were re-arrested, including the cases of journalists Ahmet Altan and Ayşenur Parıldak, activist Osman Kavala, main opposition MP Enis Berberoğlu and pro-Kurdish lawmakers such as Ayhan Bilgen, Nursel Aydoğan, Ferhat Encü and Besime Konca.

“In almost all the cases of re-arrest, decisions to re-arrest have been triggered either by an AKP politician’s statement or by a message from a pro-Erdoğan journalist that has been posted online,” Perilli said.

“Rule of law advocates noted that broad use of pretrial detention had become a form of summary punishment, particularly in cases that involved politically-motivated terrorism charges,” Perilli further indicated, adding that one-fifth of the prison population – approximately 50,000 inmates – was charged with or convicted of terrorism-related offenses, according to Human Rights Watch.

“Without effective judicial protection of fundamental rights there is no justice; without justice there is no rule of law,” the judge concluded.

Previous Article
HDP warns of Erdogan’s private war as it rallies support against closure threat
Next Article
Biden Will Call ‘At Some Point,’ and Erdogan Is Already Steeling Himself for Heavy Pressure

Biden Will Call ‘At Some Point,’ and Erdogan Is Already Steeling Himself for Heavy Pressure
NAT 7th March 2021
Submit an Op-Ed
Tweets by NewsAboutTurke1