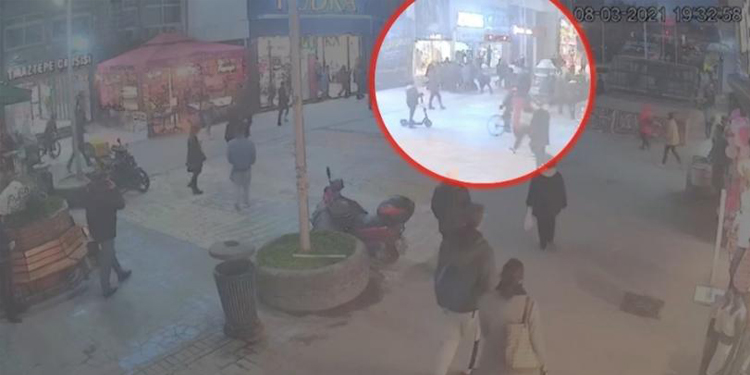 Levent Gultekin, a columnist and host for Turkey’s Halk TV channel, was assaulted outside his workplace in Istanbul Monday evening by about 25 assailants. Surveillance camera footage shared by Halk TV shows Gultekin approaching the channel’s office, where he is surrounded by a group of men who attack him and kick him repeatedly after he falls to the ground.

Gultekin shared news of the incident shortly afterward on Twitter, saying he was “fine” before disclosing he suffered several broken fingers while protecting his head and face with his hands. The journalist shared details of the assault Monday on his nightly program, in which he called the assailants “a group of cowards.”

“These 25 people are probably proud of themselves,” Gultekin said Monday. “I would be ashamed if I were them. Attacking one person as a group of 25 people is thuggery.”

He added, “The difference between the mafia and the state is the law. Those who try to make it seem like they’re the owners of the state try to implement the law of gangs. Journalists and politicians’ lives are not safe.”

The incident is the latest in a string of violent street attacks on journalists critical of Turkey’s far-right Nationalist Movement Party (MHP), which together with Turkish President Recep Tayyip Erdogan’s Justice and Development Party forms the government’s ruling coalition.

Last week, Gultekin criticized late MHP founder Alparslan Turkes in a television program, saying the politician had made “the lives of millions of young people miserable” in promoting nationalist ideologies he defined as an “illness.”

Amid the backlash, MHP deputy chair Semih Yalcin responded to the comments on Twitter Thursday, calling Gultekin “a sick man” who “hates those the nation loves.”

Earlier this year, two journalists and one politician were ambushed by assailants in the span of 24 hours in Ankara. Among them was Orhan Ugurluoglu, a television commentator and contributor to the Yenicag newspaper. He was assaulted by three attackers outside his home who he said warned him to stop criticizing the MHP.

Investigations were opened into the incidents and suspects were detained, but media rights advocates say the perpetrators of such crimes often go unpunished. Erol Onderoglu, the Turkey representative for Reporters Without Borders and Bianet media freedom rapporteur, said past failures to convict attackers of journalists have fueled a climate of impunity in Turkey.

“It’s disappointing that both the governing parties don’t react in a serious manner against such acts, which gives us the impression that violence is sometimes desired by some political groups in the country,” Ongeroglu told Al-Monitor.

During a speech Monday, Turkish Justice Minister Abdulhamit Gul wished Gultekin a speedy recovery, saying such violent acts should not be tolerated. Following similar incidents in January, Gul said the perpetrators would be “held accountable before justice.”

Yet Onderoglu says government responses have been inadequate to address what he called “systematic” violence against critical voices that he says has increased since the 2019 municipal elections in Turkey. This week, Onderoglu met with journalist Yavuz Selim Demirag, who was assaulted May 10, 2019, and told him legal action has yet to be taken against his far-right attackers.

“Unfortunately, impunity in many similar cases in the past remains a problem and this impunity also naturally paves the way for more similar attacks,” Ozgur Ogret, Turkey representative for the Committee to Protect Journalists, told Al-Monitor. “Violence against journalists should not be an offense the perpetrators can easily walk away from.”

Media rights advocates say the threat of street violence serves to silence dissenting opinions and leaves media professionals vulnerable to attacks. Reflecting on recent events, Cumhuriyet newspaper’s Baris Terkoglu said in a Halk TV interview Tuesday his state security detail was removed in October 2020 after he published an article critical of Turkish Interior Minister Suleyman Soylu. At the time, he faced a slew of threats over his reporting.

The threat of far-right violence has also reached top opposition politicians such as Kemal Kilicdaroglu, chair of the Republican People’s Party. In November, Kilicdaroglu filed a criminal complaint against mafia boss Alaattin Cakici over insults and threats in a letter shared on social media.

Cakici, who has close ties with MHP chair Devlet Bahceli, was released in April 2020 via a prisoner amnesty law during the COVID-19 pandemic.