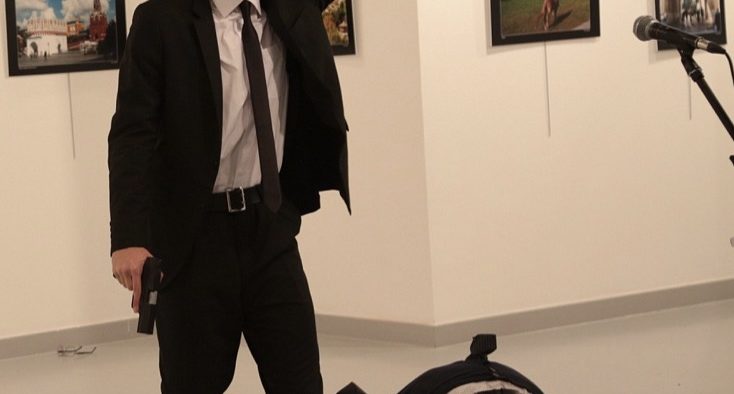 A police officer who had worked in the same division as the killer cop who assassinated the Russian ambassador in 2016 was offered a million dollars to falsely accuse innocent people during the murder investigation in order to help support the Turkish government storyline, court documents have revealed.

According to the testimony of Hasan Tunç, a former police officer, delivered during a hearing held on September 4, 2020 in the murder case of Russian Ambassador Andrei Karlov, Turkish authorities offered a million dollars to Tunç to frame innocent people as culprits in the murder. He was promised comfortable prison conditions and a short sentence in exchange for the hush money.

The Russian envoy was assassinated by al-Qaeda-linked police officer Mevlüt Mert Altıntaş on December 19, 2016 during an art exhibition in one of the most secure districts of Ankara. The evidence collected during the course of the investigation portrayed a radicalized police officer who wanted to quit his job to go to Syria to fight alongside jihadists and had been in contact with radical Turkish government imams and al-Qaeda-affiliated groups as well as President Recep Tayyip Erdogan’s family cleric Nurettin Yıldız, a firebrand preacher who openly endorsed armed jihad in Syria and frequently attacked Russia in his sermons.

Turkish prosecutor Adem Akıncı, tasked with investigating the murder, ignored all these leads; did not indict any radical figure who had been in contact with the assassin in the months leading up to the assassination; and deliberately deflected the focus of the probe away from people close to the Erdoğan government. Instead, the Gülen movement, a critic of the government, and others were scapegoated with no evidence presented by the prosecutor to support the serious allegations against them.

The offer of a million dollars was made to Tunç after he didn’t yield to pressure under torture and beatings at the police station on January 18, 2017. Apparently, Turkish authorities wanted to see if a carrot tactic would work in convincing him to perjure himself to help the government’s case in derailing the focus of the investigation from real accomplices who aided and abetted in the radicalization of the 22-year-old police officer.

“’We’ll give you a million dollars. You’ll enjoy yourself inside,’ they stated. I said, what am I supposed to do with a million dollars in there, when my parents are outside feeling miserable on my account. Even if you gave me the world, not a million dollars, I wouldn’t take it. They said: ‘No matter what you do, we’re going to put you in it [the murder case]. We’re going to find something, and we’re going to pin it on you’,” Tunç told the panel of judges in his defense against the prosecutor’s charges during a hearing at the Ankara 2nd High Criminal Court.

Tunç knew the assassin as they had worked together in the Ankara riot police unit starting in 2014, when they were hired by the government to replace purged Gülenists. He got acquainted with the killer when frequenting a mosque located in the police building. They both served on an interim basis in Bitlis province, when the government deployed some members of their unit as additional support in 2015. He was assigned as a guard at the airport two months before the assassination.

In his testimony Tunç described himself as a nationalist who was ready to kill anybody for the nation and the flag and denied allegations that he belonged to the Gülen movement. Tunç said he was groomed by a religious group called Süleymancılar, an anti-Gülen group, and stayed their dormitory in the eastern province of Elazığ during his high school years. In his 2017 statement he said regularly attended sermons given by a pro-Erdogan Turkish religious order called the Menzil community, which is led by Sheikh Seyyid Fevzeddin Erol.

When Altıntaş killed the ambassador, Tunç’s commanding officers summoned him from the airport to talk to him about the killer as a person who might had knowledge about the assassin’s character. He said he did not know anything about the plot and was let go. Two days later the police came to his home to pick him up again and took him back to the police station. This time he was subjected to beatings and stripped naked and placed on a table for torture. He was shown a long list of names and was asked to identify them as Gülenists, a group that is opposed to the Erdoğan government.

“There were a lot of names [on the paper]. You’re going to sign a statement saying that they are Gulenists. I said I won’t sign it. I said, why would I risk inviting a curse by their families [by falsely accusing them]. They said, ‘We are going to involve your brothers and sisters if you don’t sign it.’ I said, ‘Do what you have to do. You did this job [of killing the Russian envoy]. Go ahead clean up your own mess,” Tunç recalled of the tense conversation at the police station.

Tunç was subjected more beatings after his refusal to help build a false narrative for the government to use against Russia, which was understandably angry about how the Turkish government allowed this to happen to their envoy under their watch. Medical reports that confirmed torture mysteriously went missing from his case file. His head was repeatedly banged on the wall by the police when he refused to accept a hand-picked, bar-appointed lawyer and instead asked for his own representation. The police eventually coerced him into accepting a designated lawyer and forced him to sign a statement without allowing him to read it. When he asked to go through the written statement before signing, he was battered in front of the lawyer as well.

In his testimony Tunç also related a conversation he overheard among his captors, who were discussing a mistaken identity with a person who had exactly the same name as his in Konya province.

“In the end a police sergeant named Ahmet, a short guy with a brown skin, was called to the door by another. I could hear them talk as I was being slapped on the face inside the room. One said to the other: ‘There was a name mix-up. There is also another guy named Hasan Tunç, already in Konya, sentenced to four years over Gülen links. We are stuck with this [wrong] guy here.’ The other one said: ‘Screw this guy. Let him be a suspect in the [Karlov] case’,” Tunç testified.

He was released pending trial by a judge at his arraignment. However, one-and-a-half years later, investigating prosecutor Akıncı summoned him to his office again and asked him to falsely accuse some people he named. In a heated exchange on July 9, 2018, he refused to accuse anybody whom he did not know and rejected the prosecutor’s demand. He was locked up in prison pending trial.

Turkish authorities did not leave him alone in the prison, either. Turkish intelligence agency MIT planted two operatives in his cell. The two operatives had continued to mess with his head, spilled dirt on his bed and deprived him of sleep by constantly making noise during the night. He claimed his food was injected with medicine that made him sick to his stomach as part of the torture.

There was no single piece of evidence in the indictment that suggested he was involved in the murder of the Russian envoy in any way or that he knew his colleague was planning to assassinate the ambassador. Yet, at the end of the trial that was concluded on March 9, 2021 Tunç was convicted and sentenced to seven years, six months in prison.

The cell phone records, bank wires and computer logs obtained for the assassin Altıntaş as well as witness statements all pointed to several radical clerics who either worked for the Turkish government’s religious authority, the Diyanet, or had long been supported by the office of President Erdoğan.

The prosecutor’s claims collapsed when the trial started and key defendants recanted their earlier statements extracted under duress and submitted medical reports to prove they had endured torture and ill-treatment until they agreed to sign the false statements. Many government witnesses did not show up for cross-examination despite repeated motions from the defense lawyers and defendants. Those who appeared in court provided conflicting statements, while some recanted earlier statements they had given to the police.

There are a number of pieces of evidence in the case file that show the killer was in fact radicalized by jihadist literature, attended prayer circles organized by pro-government jihadist cleric Yıldız and had been befriended by known al-Qaeda militants. However, the government did not pursue the leads into jihadist networks and did not investigate the al-Qaeda figures who had worked with the killer. It was also revealed that the Erdoğan government rewarded the killer with 34 bonuses in two years’ time.