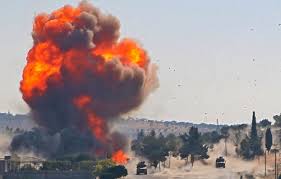 ANKARA: Turkey has asked for Russia’s help in shielding northwestern Syria following mounting airstrikes in the area, which is home to 4 million people.

The attacks are hitting civilian targets like hospitals as well as fuel facilities, which are vital for the infrastructure that Turkey wants to establish.

A missile targeted the town of Qah in northern Idlib as well as a truck and trailer park near Sarmada, wounding several civilians.

Syrian artillery also killed at least seven civilians and injured medical staff in an attack on a hospital in the rebel-controlled town of Al-Atareb. On Sunday, the UK-based Syrian Observatory for Human Rights said that strikes carried out by Russian jets hit a fuel depot in Bab al-Hawa, near the Turkish border.

The Turkish Defense Ministry sent a statement to Russia after the Qah airstrike, asking it to stop the attacks. There was no immediate comment from the Kremlin.

Its request comes as Russia increases its pressure on Syrian Kurds to leave the strategically located town of Ain Issa while also trying to push Turkey back from gaining more space.

But President Bashar Assad’s regime and Russia say they are only targeting militant Islamists.

“Turkey has only a few areas in Syria where it can really push the Russians, as needed,” Nicholas Heras, a senior analyst at the Newlines Institute in Washington, told Arab News.

“Although the Syrian Kurds are an irritant to Russia’s policy to reestablish the Assad regime’s control over all of Syria, the Kurds are also a useful chip for Russia in bargaining with Turkey and to try to convince the Kurds to pull away from the Americans.”

Ain Issa, which is held by Kurdish forces, has become a flashpoint between Turkey and Russia.

Russia expressed its displeasure a few days ago at Turkish movements around Ain Issa, viewing them as a violation of the Sochi agreement signed in Oct. 2019.

Kurdish forces withdrew 32 km back from the Turkish border under the deal, and Ain Issa is 37 km away from the frontier.

The Turks and Russians are conducting joint patrols in the area, and Russia already has a coordination center in Ain Issa.

Turkey is attacking the mainly Kurdish militia the People’s Protection Units (YPG) in northwestern Syria and backs the Syrian National Army against them. It sees the YPG as a Syrian offshoot of the Kurdistan Workers’ Party, which is outlawed in Turkey and is listed as a terrorist organization by Turkey, the US and EU.

Heras said that Russia’s guardianship of YPG-controlled areas in Aleppo was useful for Russia and that the Turks, who would like to take over those areas, were well aware of this.

“Turkish movements in these areas are messaging to the Russians that the Turks have the means to weaken Russia’s hand in the game for control over northern Syria.”

The Syrian Kurds have been under Russian pressure for some time to cede control of Ain Issa to Damascus.

Russia is trying to avoid a military operation by Turkey in the region in order to restrict its influence, so is pressuring the YPG to withdraw or decrease its military presence.

Ain Issa has become the focal point of Turkish and Syrian National Army attacks for a few months.

Aydin Sezer, an expert on Turkey-Russia relations, expected a growing standoff by Russia that would remind Turkey about its unmet commitments on different fronts.

In January, Russia’s sovereign wealth fund signed a deal with Turkey on the co-production of its Sputnik V vaccine.

But there has been no progress so far, nor any statement from the Turkish side on how this cooperation will evolve.

Sezer also said that Russia had expressed its discomfort about Turkey’s supportive messages to Crimea and its non-fulfillment of commitments for joint energy projects.

“Russian moves in Syria and its unconditional support to Damascus should be seen from a wider perspective,” he told Arab News. “Apart from the vaccine issue, Russia is also uneasy with Turkey’s inaction in Idlib to eliminate all terrorist groups in the region in line with the Astana, Sochi and Moscow deals on Idlib.”

Russia was no longer convinced by Turkey’s longtime narrative about hitting Syrian Kurds in the region as it had the upper hand in military, diplomatic and political terms, he added.

“Therefore, the Kremlin did not even release any statement after Turkey’s Sunday announcement for helping to stop the attacks in Syria. Tensions run high and it is a consciously escalated standoff that might undermine the Turkey-Russia partnership in the region in the near term.”