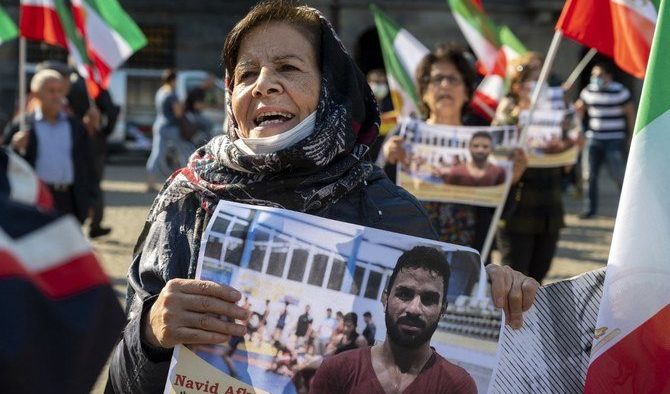 Human rights violations by the Iranian regime and its militia groups across the Middle East are becoming much more egregious and appalling, with Iran’s leaders and their proxies appearing to act with impunity.

In Iran, there are several categories that the international community ought to focus on. First of all, the suppression and execution of political prisoners and those who protest against the theocratic establishment have reached an unprecedented level. According to the recent Human Rights Watch “World Report 2021,” the Tehran regime is one of the leading executioners in the world. It executed more than 230 people in 2020, including individuals who committed their alleged crimes when they were children.

It is not only the number of executions that is appalling, but also the nature of some of them. Executions since the beginning of last year have involved juveniles, women and individuals from ethnic and religious minority groups, including Ahwazi Arabs, Kurds and Sunnis. Although Iran has ratified the UN Convention on the Rights of the Child, President Hassan Rouhani’s government has made no effort to alter the country’s Penal Code, which allows girls as young as nine to be executed.

Concerning the persecution of Ahwazis and Balochis, Diana Eltahawy, Amnesty International’s deputy director for the Middle East and North Africa, said: “The recent escalation in executions of Balochis and Ahwazi Arabs raises serious concerns that the authorities are using the death penalty to sow fear among disadvantaged ethnic minorities, as well as the wider population.”

The Human Rights Watch report also mentions the execution of high-profile figures such as Navid Afkari. The wrestling champion and his brothers were tortured to force them to testify against each other and to extract “confessions,” which were then aired on television. “For around 50 days, I had to endure the most horrendous physical and psychological tortures,” Afkari wrote in a letter. “They would beat me with sticks and batons, hitting my arms, legs, abdomen, and back. They would place a plastic bag on my head and torture me until I suffocated to the very brink of death. They also poured alcohol into my nose.”

Tehran is attempting to instill fear in society and send a warning to the population that any opposition will be harshly dealt with.

Another well-known figure who was executed in late 2020 was the dissident journalist Rouhollah Zam. He lived in exile in France and was reportedly kidnapped by operatives working for the Iranian regime shortly after he left the country for Iraq on Oct. 11, 2019. Zam ran the online news site Amad News and his channel on messaging app Telegram reportedly had more than 1 million followers.

By executing such high-profile figures, Tehran is attempting to instill fear in society and send a warning to the population that any opposition to the political establishment will be harshly dealt with.

To further suppress political prisoners, Iran’s courts system denies defendants access to legal counsel and a fair trial. Lack of due process, forced confessions and physical or psychological torture are prominent in the process through which the judiciary sentences defendants to the death penalty. As the Human Rights Watch report stated: “Iranian courts, and particularly revolutionary courts, regularly fall far short of providing fair trials and use confessions likely obtained under torture as evidence in court. Authorities have failed to meaningfully investigate numerous allegations of torture against detainees. Authorities routinely restrict detainees’ access to legal counsel, particularly during the initial investigation period.”

In 2020, ordinary citizens’ basic freedoms, including those of expression, assembly, association and religion, deteriorated in Iran. The regime has particularly ratcheted up its discrimination against religious minorities such as the Baha’i.

Meanwhile, Iran’s militia groups in Iraq, Syria and Yemen are following their paymaster’s example when it comes to committing egregious human rights violations. For example, in addition to launching rockets into other countries such as Saudi Arabia, the Iran-backed Houthis in Yemen have been using landmines, which are causing civilian deaths and injuries. Houthi forces also continue “to harass and prosecute dissidents, including academics, lawyers, students, religious minorities, and journalists. Houthi authorities prosecuted 35 parliamentarians in March, with Houthi-controlled courts sentencing them to death in absentia on charges of treason. Women human rights activists faced repression by parties to the conflict for their work on women’s rights.”

In a step in the right direction, US congressman Joe Wilson this month introduced a bill on the eve of Nowruz, Iran’s new year, to hold the regime accountable for its human rights violations. The bill, known as the Iran Human Rights and Accountability Act of 2021, includes Hezbollah and the Iran-backed militias in Syria and Iraq. But this bill alone is not enough. It is incumbent on the UN to intervene and act immediately in order to hold the Iranian leaders and their militia groups accountable for the crimes against humanity they are committing.