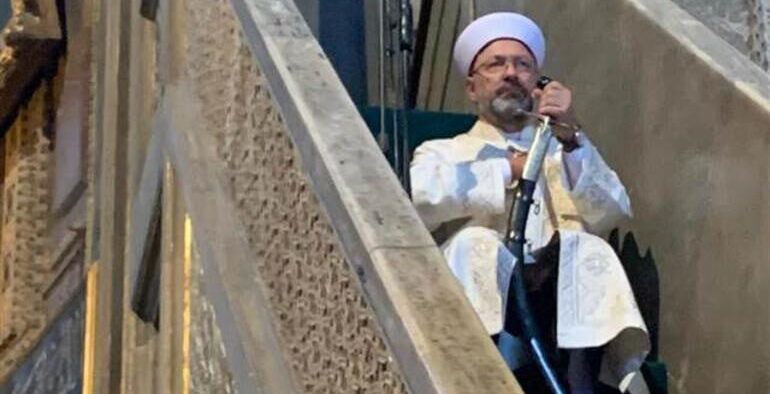 President of Turkey’s Religious Affairs Directorate (Diyanet) Ali Erbaş said young people must be protected from ideologies that are in conflict with Islam and that there should be more activities focusing on increasing religiosity among the younger generation, the Duvar English news website reported.

During a speech at the Diyarbakir Higher Religious Education Center, Erbaş said youth must be protected against atheism, deism and other “pagan” beliefs. “If we stand aside and do nothing, our children will fall victim to organizations trying to spread these beliefs that are completely incompatible with Islam,” he said.

Erbaş said they would be “committing a sin,” if they allowed such ideologies to flourish in the country.

Erbaş is known for his controversial and discriminatory remarks that often target non-believers. In October 2020 he said all kinds of evil could be expected from individuals who do not believe in an afterlife.

Erbaş was sued by the Atheism Association for targeting non-believers and putting them in danger by inciting hatred and enmity among the public. According to a statement issued by the association, Erbaş was not only violating the secular Turkish constitution by targeting non-believers but he was also paving the way for their social marginalization by publicly slandering them.

This is not the first controversial remark by Erbaş, as he has been known to make discriminatory public statements. Erbaş targeted the LGBT+ community last year by saying “homosexuality causes diseases.” During a Friday sermon he said same sex relationships corrupted people and was a condemned act, which caused HIV.

The Ankara Bar Association accused Erbaş of inciting hatred against the LGBT+ and filed a criminal complaint against him. However, the Ankara Chief Public Prosecutor’s Office said there was no need to start an investigation as Erbaş was only conveying the teachings of Islam.

However, Erbaş has frequently teetered on the brink of his duties as president of the Diyanet and violating the secular pillars of the Turkish constitution.

The Diyanet is supposed to be apolitical, according to the constitution. But in recent years it has been increasingly politicized to the level that President Recep Tayyip Erdoğan compared the staff and imams of the Diyanet to “members of the army” in 2018.

In a highly controversial move, Erdoğan restored the status of Istanbul’s Hagia Sophia museum to that of a mosque with a presidential decree on July 13, 2020.

Erbaş delivered the first Friday sermon in the newly converted mosque on July 24, holding a sword. He later said it was a tradition during Ottoman times and that the sword symbolized conquest. Erbaş added that the conversion of the Hagia Sophia from a museum to a mosque was a “conquest.”

During the sermon he said Hagia Sophia was always meant to be a mosque, that its conversion to a museum was a “condemned act” and that authorities who converted it to a museum in the early years of the republic were “cursed” for doing so.

Previous Article
“Apologize for making Kurdish again an ‘unknown language’ and reviving the Kurdish issue by leaving this nation in the lurch”: Babacan to Erdogan
Next Article
21,495 people fined for violating pandemic curfew in a week as AKP continues its jam-packed meetings