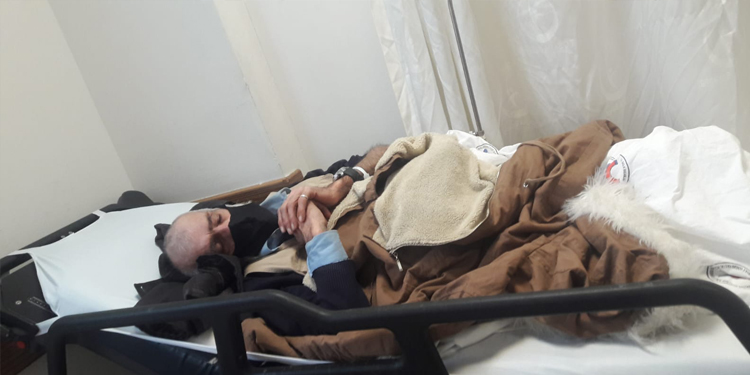 Eyvaz Akıncı, 76, was arrested on March 21 and sent to Istanbul’s Metris Prison for alleged links to a terrorist organization, despite suffering from stage three lung cancer, the Mezopotamya news agency (MA) reported.

Akıncı’s family has appealed to authorities for his release from prison, citing doctors who said he would not live more than 18 months. Akıncı’s daughter Devrim Taşer said they wanted her father to spend his last days with them. “My father endured torture and unlawful arrest among many other difficulties. We do not want him to leave prison in a coffin,” she said.

Akıncı was arrested for alleged links to a terrorist organization and aiding and abetting illegal organizations. He was sentenced to four years, six months in prison, and his sentence was upheld by the Supreme Court of Appeals.

Before his arrest Akıncı was treated at an Istanbul hospital and received both chemotherapy and radiotherapy. Akıncı also suffers from high blood pressure, heart and stomach diseases, asthma and chronic obstructive pulmonary disease. He cannot eat solid food and needs to be fed with special liquids.

“My father cannot eat or use the toilet,” said Taşer. “Before he was arrested we used to feed him, but he kept coughing up blood. In the last few weeks he could barely drink water.”

Taşer emphasized that her father needed to be in a warm and hygienic environment, where he could access proper healthcare. She expressed deep concern that he would suffer from neglect.

Akıncı’s daughter and wife said the lives of all inmates were valuable and that none of them deserved to waste away in prison, especially if they were seriously ill, and called for the immediate release of Akıncı.

Human rights activists and opposition politicians have frequently criticized authorities for not releasing critically ill prisoners so they can seek proper treatment. Human rights defender and HDP deputy Ömer Faruk Gergerlioğlu said ill prisoners were not released until they were at a point of no return.

According to Gergerlioğlu, sick prisoners are released when the authorities realize they will die soon. He claimed that prisoners did not have access to proper healthcare facilities such as hospitals or infirmaries.

According to the most recent statistics published by the Human Rights Association (İHD), the number of sick prisoners is in the thousands, more than 600 of whom are critically ill. Although most of the seriously ill patients have forensic and medical reports deeming them unfit to remain in prison, they are not released. Authorities refuse to free them on the grounds that they pose a potential danger to society.

A number of critically ill prisoners passed away in 2020 because they were not released in time to receive proper medical treatment.

Since April 2020, four seriously ill prisoners over the age of 70 have died in penal institutions; five inmates suffering from cancer died shortly after they were released; and 16 died of chronic illnesses while imprisoned.