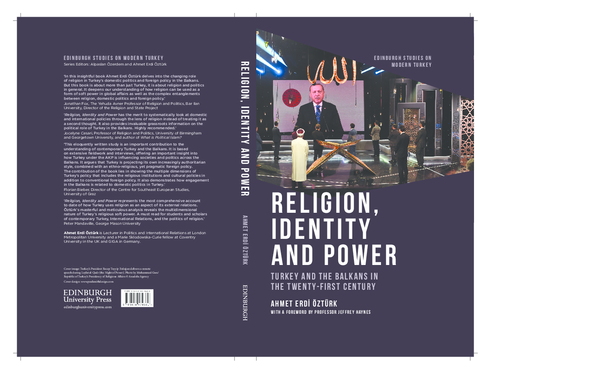 The appeal of Tayyip Erdogan can be hard to fathom if you have never seen him perform live. In May 2018, Bosnians were treated to the full spectacle as the Turkish president delivered a rally in Sarajevo: his outsized motorcade trailing through the city’s quaint streets accompanied by black-suited protection officers, and his acerbic rhetoric from the stage as he promised to protect Europe’s Muslims from the continent’s ingrained Islamophobia.

‘I came because I wanted to see how the Turks love their president,’ one young woman in the crowd told me. ‘Bosnia doesn’t have anyone like him.’

Ahmet Erdi Ozturk, a Turkish academic based in Britain, heard the same thing countless times as he travelled around the region between 2015 and 2018.

This was one of the most turbulent periods in modern Turkish history, as Kurdish militants renewed their war against the state, terror attacks carried out by the Islamic State group and the PKK, the Kurdish guerrilla movement, tore through the big cities and a faction within the military tried, unsuccessfully, to unseat Erdogan.

Upon hearing Ozturk’s very Turkish name, interviewees were quick to proclaim their support for Erdogan and admiration for all he had done.

A large part of this was down to religion. They assumed, without asking, that Ozturk was a devout Muslim and therefore a fellow admirer of Erdogan. Islamic communities are scattered throughout the Balkans, some of them Turkish-speaking although most are not, and in his 18 years in power in Erdogan has made a concerted effort to court them on the grounds that he is their protector.

On the surface, as at the rally in Sarajevo, he appears to have succeeded; yet in Religion, Identity and Power, Ozturk dissects Turkey’s religious reach in three Balkan countries, Albania, Bulgaria and North Macedonia, to reveal a far more complex picture.

‘While some places and groups – mostly conservative Muslims – welcome Turkey’s influence, others regard it with caution and concern,’ he writes. Mostly, this is related to Erdogan’s own increasingly overt Islamism since 2013, when he eliminated rivals within his party and violently crushed a youth uprising in Turkey.

Back then, a secular Turkey promised to be a moderating force against the more radical Middle Eastern forms of Islam. Now, the Bulgarian government is concerned about what it views as the potentially radicalizing influence of Erdogan’s Turkey

In Bulgaria, state officials tell Ozturk how they had welcomed the input of the Diyanet, Turkey’s state religious agency, in the 1990s, when they were working out how to re-introduce religion into public life after the collapse of communism. Back then, a secular Turkey promised to be a moderating force against the more radical Middle Eastern forms of Islam. Now, the Bulgarian government is concerned about what it views as the potentially radicalizing influence of Erdogan’s Turkey – and yet Ankara’s structures are so embedded that they feel unable to fully shift them.

In Albania, Ozturk learns that Turkey’s interventions have widened divides between the country’s various Islamic factions. TIKA, Turkey’s state reconstruction agency, has built and repaired scores of mosques and Islamic centres here, as it has elsewhere in the region. But support is directed towards the more fundamentalist sects that support Erdogan’s AK Party, while the more moderate religious orders are ignored.

Turkey, for its part, has ‘idealized’ the Balkans as a natural part of its backyard rather than taking a pragmatic foreign policy approach, Ozturk argues – and is losing some influence there as Erdogan leads Turkey away from Europe and towards one-man authoritarian rule.

Part of Erdogan’s appeal to the Balkan states in the early years of his tenure was that he shared their European Union ambitions. But, as Ozturk pithily notes, Erdogan ‘regards ideologies as garments to be cast off and put back on again depending on their utility’, and as he has shed the liberal dressings of his early years in power, so any hopes of Turkey joining the European Union have faded. That may work well for him at home, where the majority of Turks have also lost patience with the EU, but not in the Balkan states, all of which bar Kosovo are either members of the bloc or aspiring to join.

Ozturk offers useful background on the Balkans’ Ottoman history before delving into the roots of the current relationship between the former imperial power and its hinterlands. Erdogan’s policies there were in fact begun decades ago, he reminds us, by Turgut Ozal, Turkey’s first civilian leader following the coup of 1980.

Ozal supported Bulgaria’s Turkish-speaking Muslims during Zhivkov’s campaign of mass expulsion in 1989, and it was he who dispatched the Diyanet and other state organizations to the region. It was also Ozal who supported the Gulenists, the private Islamic network which Erdogan accuses of launching the coup against him, to gain a foothold in the Balkans with their network of Turkish language schools and religious study groups.

When Erdogan’s AKP party won power in Turkey in 2002, he used this existing state network, and the Gulenists, to expand his own influence. Since the coup attempt, Erdogan’s crackdown on the Gulenists has reached into the Balkans, with what appear to be a number of extraordinary renditions carried out by the Turkish intelligence services.

This is a long-overdue and thorough investigation of Erdogan’s extraordinary influence in a turbulent region, but it is a shame that its scope is not wider, both geographically and thematically.

Turkey is not the only outside power interested in the Balkans – Russia has been courting the region’s Orthodox communities, while China has been expanding links through trade and investment. Bosnia is the confluence point, where the ethic Serb community holds Putin in the same high regard as many Bosnian Muslims hold Erdogan. That is dangerous. The Balkans is again hearing the rumble of internecine rivalries. Aleksandar Vucic, Serbia’s president, was Milosevic’s propaganda chief who vowed to ‘kill a hundred Muslims for every Serb they kill’.

Across the region, convicted war criminals are starting to return home from The Hague, receiving state-sponsored hero’s welcomes as they touch down in countries that have changed little since the Yugoslav wars ended.

As Ozturk notes in North Macedonia, in many cases ‘supporting Erdogan does not have much to do with loving him’ but is a self-preservation reflex in a region built on ethnic and religious fault lines. It is in that context that the consequences of Erdogan’s Balkan ambitions will play out in the years to come.

The Times correspondent in Turkey, and author of ‘Erdogan Rising: The Battle for the Soul of Turkey’

Previous Article
Kurds in ‘mountain prison’ cower as Turkey fights PKK with drones in Iraq
Next Article
The story of a lawyer in Turkey: all alone against the state

The story of a lawyer in Turkey: all alone against the state
NAT 5th April 2021
Submit an Op-Ed
Tweets by NewsAboutTurke1