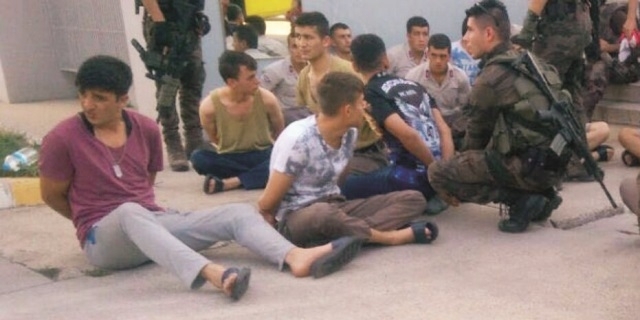 The families of trainee pilots sentenced to life in prison broke their silence to protest the men’s innocence. The pilots are among more than 600 trainees and conscripts swept up in prosecutions.

ISTANBUL — Their happiness shines out of the photograph: 14 graduates of Turkey’s Air Force Academy celebrating their completion of a flight training program with a picture together in front of a fighter jet.

Within months, all but one of the group would be in jail, accused of joining a 2016 coup attempt that brought blood to the streets and threw the country into turmoil from which it has yet to emerge. Last November, 13 of them — the other was not on base, because he was getting married — were found guilty of trying to overthrow the constitutional order and sentenced to life in prison, their military careers and their dreams of flying F-16s dashed.

President Recep Tayyip Erdogan faced down the coup attempt and cracked down hard in the aftermath, imposing a state of emergency for two years, detaining 100,000 people and purging 150,000 public employees from their jobs. More than 8,000 military personnel were prosecuted for their part in the insurrection, including more than 600 trainees, cadets and conscripts — most in their early 20s — whose misfortune was to have been given orders that night.

Their fate has been largely overlooked in Turkey, where government rhetoric against the coup perpetrators is strident and families and lawyers of the defendants have been scared to speak out. But after the 13 were sentenced to life in prison — 12 of them receiving “aggravated life,” the harshest form of life sentence, without parole — some of their families decided to break their silence.

At first, the trainee pilots and their families had trusted in the system, in part because Turkey’s history has been littered with coups and lower-ranking troops had never been held accountable in such a way.

“When it comes to a coup, it is at the level of generals,” said Ali Kalin, Alper’s father, who is himself a retired army sergeant. “I want to emphasize the injustice. What did they do?” he said of the trainees.

In the summer of 2016, the group had just arrived at Turkey’s Akinci Air Base outside Ankara, the capital, to start training on F-16 fighter jets — the pinnacle of a 10-year military education. On July 15, they were called in to the base take an English exam and were then told to stand by to observe a counterterrorism operation.

But Akinci air base turned out to be the headquarters of the coup plotters, a collection of military personnel and civilians who that evening ordered troops to seize control of key installations, planes to bomb Parliament and a unit of commandos to capture Mr. Erdogan.

The president evaded capture, and in a cellphone interview with a television station, he called on members of the public to face down the putsch. By morning, troops loyal to the government had regained control and attacked Akinci air base, detaining many of those involved.

The trainee pilots had been largely unaware of what was going on, according to their statements to investigators and in court, which the government challenged and which could not be independently verified.

Their cellphones had been taken away — which was normal during a military operation — and the television had been removed from the mess hall where they spent much of the night sitting around, they said. They moved chairs, made tea. Some stood guard on the back entrance to the squadron building, and three were sent to the front gate and handed rifles, although the court found that they had not used them.

As the base came under fire from special forces troops, the trainees were told to leave, which most of them did around 8 a.m., driving their own cars. Alper Kalin arrived home scared and exhausted, but his parents reassured him.

“I did not think anything would happen to those trainees,” Ali Kalin said. “They did not use firearms. They were not involved in anything — just Akinci base was their place of duty.”

Eleven days later, the group was called back to the base to give testimony about the events, and they were immediately detained. Within hours, their names had appeared on a list of personnel purged from the military.

That was a bombshell for the trainees and their families from which they are still reeling. The pilots have been in detention ever since. When their parents and siblings tried to find them at police stations and army bases, they encountered insults and abuse. From being proud parents of celebrated military achievers, suddenly they were branded traitors and terrorists.

“I did not go to the hearings,” said Sumeyra Soylu, 25, whose brother Ali was one of the 13 detained. “There was a certain group of people, known as the plaintiffs, who were cursing and swearing loudly at the relatives of the defendants, and he didn’t want us ever to hear them.”

Then followed four and a half years of legal proceedings as prosecutors indicted more than 500 defendants in the Akinci base trial. In a courtroom the size of a sports arena at Sincan, outside Ankara, 80 trainee pilots went on trial alongside senior commanders and civilians accused of leading the coup. The United States-based Islamic preacher, Fethullah Gulen, was charged in absentia of being the mastermind.

Mr. Erdogan was listed among the victims of the events and was represented throughout the trial by his lawyer, Huseyin Aydin, who often clashed with the defendants and their lawyers.

“The target of the crime of breach of Constitution that many defendants, including the trainee lieutenants, were charged with was President Erdogan,” Mr. Aydin said in written answers to questions from The New York Times.

The trainees were charged with being members of a terrorist organization, trying to overthrow the constitutional order, murder and attempted murder, since eight civilians died in clashes at the entrance of the base. But the prosecution did not produce evidence that implicated them in the coup plot or the clashes that occurred, their lawyer said. The lawyer asked not to be named to avoid legal repercussions for himself.

As trainee officers, they are still undergoing their education and can only take orders, not issue them, he said. Akinci base was their place of work, so they should not be considered guilty simply for being present there, and their own commanders testified in court that the trainees had played no part in the events, he said. Yet in the end, they were convicted, along with all of the others present at the base that night, of trying to overthrow the constitutional order.

Mr. Aydin said that trainee pilots had provided support services that night to the coup plotters in place of the usual staff, including transporting pilots and guarding buildings and captives. “There is no doubt that the trainee pilots contributed to the coup attempt,” he said, adding that the conviction was not final and still had to go through the appeal process.

Many Turks opposed the coup. But as the crackdown has continued for more than four years and swept up many with no connection to the events surrounding it, they have become deeply unhappy with the state of justice.

Kemal Kilicdaroglu, the leader of Turkey’s largest opposition party, supported Mr. Erdogan against the coup plotters but has since accused him of orchestrating a civilian coup when he rounded up tens of thousands of political opponents, academics, lawyers and journalists who had nothing to do with the coup attempt.

The purges in the armed forces were systematic, rooting out whole units and conducting yearly roundups. Only two pilots remain in the air force from the class of 2010, to which the group of 13 belonged, said a former classmate who was among those purged.

Mr. Kalin, who served much of his career in the gendarme, said: “Our trust in the law, in the courts, in justice, in the state, in the government fell to zero. Even below zero.”

By now, the purges and prosecutions have included thousands in the military — officers and cadets alike.

“Is it OK to darken the lives of that many people without discriminating between the innocent and the guilty?” said Hatice Ceylan, whose son Burak, 29, is among the 13 trainees sentenced. “They are just children. There are plenty like my son, rotting in jail.”