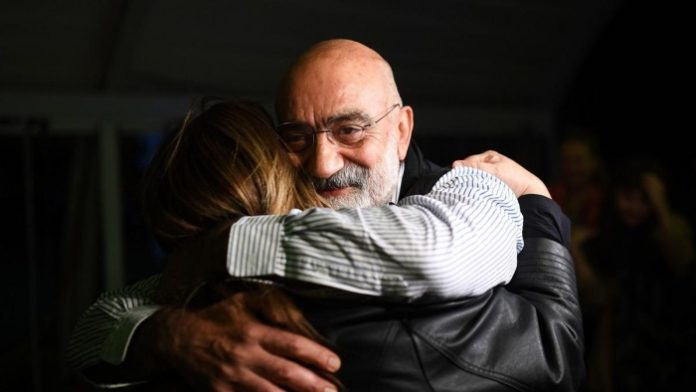 The European Court of Human Rights (ECtHR) ruled on Tuesday that Turkey had violated the right to liberty and security as well as the right to freedom of expression and the right to fair and speedy proceedings of prominent author and journalist Ahmet Altan.

The rights court also ordered Turkey to pay 16,000 euros in compensation to Altan.

Altan, 71, was arrested shortly after a coup attempt in July 2016 as part of a purge of media organizations and was accused of supporting the attempt by spreading “subliminal messages announcing a military coup” on television.

In its verdict the ECtHR found that “there was no evidence that the actions of the applicant had been part of a plan to overthrow the government.”

Altan’s detention had not been based on a reasonable suspicion that he had committed an offense, the court found.

The Strasbourg court, however, dismissed the violation of Article 18 of the European Convention on Human rights in the Altan case.

Ahmet Altan was arrested in 2016 with his brother, economist and journalist Mehmet Altan, and fellow journalist Nazlı Ilıcak. They were charged with attempting to overthrow the constitutional order and interfering with the work of the legislature and the government.

Turkey’s Supreme Court of Appeals overturned Ahmet Altan and Ilıcak’s life sentences in July 2019. The court acquitted Mehmet Altan due to a lack of evidence and ordered that Ahmet Altan and Ilıcak be retried on the lesser charge of aiding the Gülen movement, which is considered a terrorist organization by the Turkish government.

Ahmet Altan was found guilty on November 4, 2019 and sentenced to 10 years, six months in prison. He was released pending appeal and was subjected to a travel ban.

Two days later the prosecutor appealed the court decision, claiming that Ahmet Altan posed a flight risk. The İstanbul court granted the prosecutor’s request on November 12, and Altan was re-arrested at his home that evening and sent back to Silivri Prison.

Altan, born on March 2, 1950, spent his 71st birthday in İstanbul’s notorious Silivri Prison, where most political prisoners are held, without a shred of credible evidence that he has committed any crime other than to express critical opinions.

An advocate for the country’s minorities and a strong voice of dissent in Turkey, Ahmet Altan’s arrest and conviction received widespread international criticism from Nobel laureates, human rights organizations, authors and journalists around the world.