Demirtaş says Kobani is a trial of political revenge against HDP

Demirtaş says Kobani is a trial of political revenge against HDP 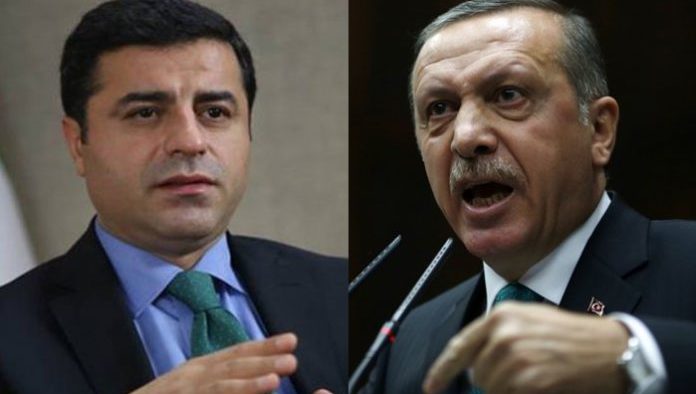 Jailed Kurdish politician Selahattin Demirtaş, who along with 107 other Kurdish politicians is standing trial for his alleged role in deadly 2014 protests, said the trial is aimed at taking political revenge on the pro-Kurdish Peoples’ Democratic Party (HDP), the second largest opposition party in the Turkish Parliament.

The second hearing in the trial of the 108 Kurdish politicians, 28 of whom are currently in jail, was held at the Sincan Prison Complex in Ankara on Tuesday.

Some journalists were prevented from entering the courtroom on the grounds that they didn’t have the turquoise cards given to journalists by the presidential Communications Directorate.

The case against current and former members of the HDP — including its two former co-leaders Demirtaş and Figen Yüksekdağ— stems from one of the darker episodes of the decade-long Syria war.

Thirty-seven people died in violent demonstrations against the Turkish army’s inaction in the face of an Islamic State in Iraq and the Levant (ISIL) offensive against the largely Kurdish northern Syrian town of Kobani in 2014.

Demirtaş had called for street protests in support of Kurdish fighters in Kobani while accusing Ankara of failing to provide adequate help to the town and of supporting ISIL.

“This trial is not about Kobani. It is a trial of political revenge against the HDP. There will be a real trial for Kobani [protests] one day, and those who are responsible for the killings, who perpetrated a massacre and who ordered a massacre will be exposed, but everyone should rest assured that we will not be in the defendant’s chair that day,” Demirtaş said, attending the hearing via the IT Voice and Image System (SEGBİS) from Edirne Prison, where he has been jailed since November 2016.

The HDP accuses the government of provoking the deaths.

In the meantime, ruling Justice and Development Party (AKP) deputy chairperson Leyla Şahin issued a press statement in front of the courthouse targeting the HDP politicians on trial.

“Our hope and expectation are that those who masterminded and perpetrated the killings [during the Kobani protests] get the punishment they deserve,” said Şahin.

The 3-500-page indictment, drafted six years, three months after the protests, was submitted to the Ankara 22nd High Criminal Court in December 2020 and was accepted by the court in January 2021. The defendants face various charges related to the protests that include 37 cases of homicide and disrupting the unity and territorial integrity of the state.