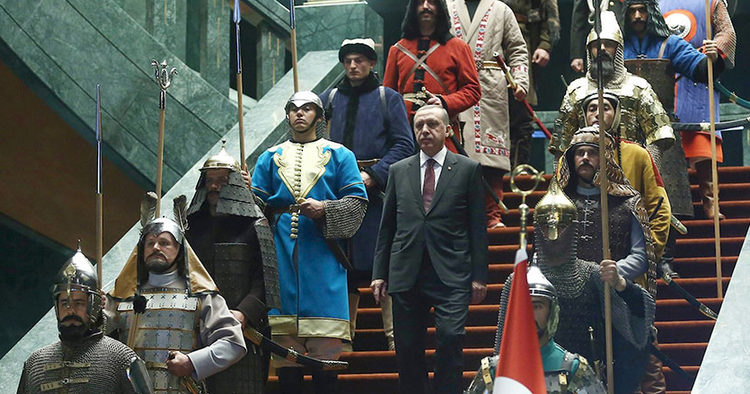 It is going down and that is a fact. It is collapsing even though nobody will probably tell you that since it has not been finalized just yet. In fact, Ottoman Empire experienced the same. Being called Europe’s sick man, it was actually on the ragged edge. At the beginning of the 20th Century, the Ottoman Empire was merely in a state of formal existence tolerated by the great powers that focused on what would happen after the death of the sick man.

Turkey has not been able to escape the tragic downfall atmosphere of the Ottomans. Why? It is unexplainable what is going on today before we get to the answer.

The structural and particularly the sociological problems, which were the main reasons for the collapse, have not been urged upon after the disappearance of the Ottoman Empire and the proclamation of the Republic. But rather, superficial problems attracted more attention. The concept of the state was not modernized. The Republic (res-publica) as a state form was preferred by the founding fathers of the Republic because it was considered the opposite term of monarchy – sultanate – however, the public, meaning the people, was cast away as an insignificant detail. There was no link between the republic and democracy, human rights were ignored, and the developments and reforms made in human rights were not followed. The sense of an archaic state inherited from the past remained more or less the same. Only the heads of the state were changed, and it was renamed, that’s all. The centralistic and powerful state concept remained. From the Ottomans to the Republic, the perception of a superior state being the primary asset was largely and predominantly blessed. In other words, the modernization of the state remained superficial, and as it is used in the colloquial language nowadays; it was confined only to cosmetics changes. Radical administrative changes, and more importantly changes targeting the administrative philosophy never came to life. Thus, the “infected tissues” during the Ottoman period were directly transmitted to the newly founded Republic, and eventually, the Republic had to fight the same disease, or in other words, the baby was born with this disease.

One of the most infected structures in this system is utilizing the state to get rich. In the Ottoman Empire, all properties belonged to the state, meaning the sultan. Private property did not exist. For example, it was the state that handed some lands to state-selected servants. Yet, these lands never became the properties of the individuals. Descendants had no right to receive such properties by inheritance. But if the Monarch decided to do so, such lands could be delivered to the children of the previous administrators, depending on the will of the sultan. This system remained until the Tanzimat period (reforms led to constitutional monarchy). Thus, the state was the most important economic actor and the single source of wealth. Even though the Republic de jure acknowledged private property by officially adopting Western laws, the political culture of this powerful centralist power over wealth was inherited from the Ottoman past empowering the state from time to time for arbitrary limitations of private property.

Another important reason is the inefficiency and failure of the looting-based archaic economic system of the Ottoman Empire against the modern economy of the West. The Ottoman Empire did not have a sophisticated economic system. Besides the looting economy run through unending military campaigns, the material production in the empire was based on traditional ineffective agriculture. In other words, the primary source of state revenues was not production but pillaging. It was a revenue model we could call an economy of war. New lands were conquered, and the main income was built on jizya – head-tax applied to non-Muslim subjects – which was collected mainly from the Christians living in the conquered territories. Moreover, the main source of the “labor force” (soldiers) was the devshirme – forcibly converted Christians – and the enslaved women sold as property and used as sex slaves for rich Muslim men. The central pillar of the Ottoman military was the devshirme organization. Also, the agriculture carried out by the Muslims did not improve significantly between the 13th and 20th centuries. On the other hand, in the West, the Industrial Revolution, Enlightenment and the Scientific Revolution took place which deepened the gap of development between the Ottomans and the West drastically.

Moreover, deepening developmental disproportionalities had also a great impact on the war economy of the Ottomans since the Ottomans were seriously falling behind the West between the 17th and 18th centuries. Economic reasons were the invisible failure behind this. Another reason is the dereliction of the rational mind and science. And there were merely a handful of Ottoman intellectuals who addressed such issues.

The Ottoman Empire began to disintegrate at the beginning of the 20th century. It lost almost all territories in the Balkans, the Middle East, and North Africa. Islamic (Umma identity) and the Ottoman identities that had little potential to hold the empire together did not provide any solution to revive the empire and re-cement its territories. The Ottoman intellectuals in search of an alternative identity set their mind to transform the Islamic state form of the Ottoman Empire into a Turkish empire based on nation-state principles. They also wanted to use this as an instrument for the reforms on the politics of the economy. They undertook a brutal ethnic homogenization and ethnic cleansing policy in Anatolia. They also seized the properties of the Armenian and Greek subjects of the empire to carve out a “Turkish bourgeoisie”. The Armenian genocide of 1915 and the Greek genocide served this purpose. Therefore, the economy of spoliation and depredation model of the Ottomans revealed its most disgraceful example in the 20th century. The riches of such spoliation were used to create a national bourgeoisie foreseen by the unionists. Thus, the Republic adopted and absorbed the spoliation economy model of the empire which was enforced shamelessly for cases such as the Varlık Vergisi (a wealth tax generally levied on non-Muslim citizens in Turkey in 1942). The plundering operations carried out today are nothing more than an accustomed “genetic reflex” of the Turkish state. In short, this is the place of the modern time genocides and spoliation economy in the state institution. This serves as a key grout in the current Turkish state and is one of the foundations of the political culture of Turkey.

So, how come, this unlawfulness was legitimized? It is not a secret that plundering is justified by the state and Islam. Because of the lack of a “Protestant Ethic” in a Weberian context, an entrepreneur tradition essential for a market economy and productivity did not emerge in Turkey. This is closely related to the political economy of Islam. This creates serious problems both on the relationship between individuals and state, and negatively influences people’s perceptions regarding economic ethics. The mentality of generating wealth through the state causes exposure to corruption both in the bureaucracy and the economic system. Political and economic fields in this archaic model appear as if they were independent of ethics. In contrast to the Weberian Protestant Ethic based on production and gain God’s approval, the Ottoman and Turkish traditional economy model generate the paradigm of being able to get wealthy through a corrupt state without creating added value. Thus, as Turkey struggles to reach its real economic potential, the corruption of the state reproduces itself in a vicious circle. Moreover, the state in Turkey has become the largest center and organizer of corruption that reaches levels that had never occurred before.

I believe this unprecedented labefaction is related to sociological and cultural codes. Especially the absence of individualism is one of the main reasons for such labefaction. People in Turkey exist inside dual structures according to their religious cults, tribes, groups of ideological belief, and worldviews. Moral principles and standards that are bounding to everybody cannot come to the surface in such environments. Furthermore, under these circumstances, the state cannot be reformed for a sufficient rationalization to become an objective and neutral organization. In Turkey every political, ideological, or religious group intends to “conquer” the state, namely, to get more influential in it through a corrupt staffing strategy. This type of state will always be someone’s state and exclude others. In an excessively polarized society, this type of corruption prevents personal ethics to settle, or in other words, the universal “rules of the game” cannot establish. Individuals do not care about being immoral towards the members of the other groups since gaining the legitimacy of their own groups serves as an adequate moral legitimacy. This situation forms the main dynamo of corruption.

Closeness to governance and the holiness attributed to the state sprout exactly in such an environment. The holiness of the state brings along the legitimacy of being illegal on behalf of the state. The common strategy in this system displays itself in sweeping illegal transactions under the carpet while chanting about patriotism forms the foundations of this system. Under such circumstances, many parasites try to approach the state, be a part of it by becoming a public servant, bureaucrat, technocrat, or politician. And they push the state into more unlawfulness when they finally get their seats. The phenomenon of politicians and bureaucrats who do not recognize the constitution or law emerges easily in such states which ignore accountability. We are experiencing striking examples today.

There is no government in the political tradition of Muslim-Turks which did not experience power limitation. In a system like this justice is merely a matter of opinion. An “ideal situation” which can be summarized as the non-corporate unlimited power belonging to a competent person is the best thing that could happen in such a political environment. A powerful and honest leader can rule the state and the state becomes “good”. This is the oriental state perception of Islam. Laws certainly exist;however, they cannot be enforced on those who are in power.  A government based on limited power – the foundation of any rule of law – contradicts this tradition fundamentally. This Islamic tradition or political power is based on centralism and does not correspond with the concept of the separation of power. In the Islamic political culture, the power is monolithic. In the Turkish case, the state is de jure a Western one, yet the political reality clearly manifests a diametrically opposite situation. In other words, the political culture undermines the Western constitutional order.

While the EU process was still alive and Turkey was undergone a comprehensive reform process to become a rule of law and democracy, partially because of economic necessities, the reform process stopped, and Turkey has experienced a rapid and unprecedented authoritarian nation which ended up with the collapse of the Turkish state. When did it start? To provide a certain date; Turkey has been collapsing since 2013. This downfall started after the Gezi Park Protests (2013) and 17 December 2013 corruption investigation. The last exit before the bridge that offered a turnabout from the hubris syndrome was passed at this point. The breaks of the state entirely failed. The tipping point where the body could at least respond to any kind of treatment was long gone. The gangrene spread through the entire body. And now the patient lies dead in the bed.

Turkey is only a formal existence right now.