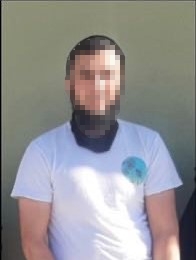 Turkey’s Defense Ministry on Sunday tweeted that border guards had captured 12 persons including the member of a radical terrorist organization who is wanted on an Interpol Red Notice, in Hatay province, located on the border with Syria, while the suspects were trying to enter Turkey illegally.

More interestingly, the blurred photo of a man was included with the ministry’s tweet, which is rarely done for terror suspects by Turkish security forces. It was not specified whether the person in the photograph was the actual person who was caught. Turkey’s state-run Anadolu news agency did not include the photo in its report, reinforcing the possibility that the ministry may have used a representative photo.

Security experts Nordic Monitor reached out to said security forces may hide captured suspects from the public in order to expand counterterrorism operations, but that doesn’t appear to be the case in this instance. They referred to a presidential decree from 2017 that authorized the Turkish intelligence agency (MİT) to extradite suspects to another country or swap them for people detained or convicted in another country. The defense ministry may have announced that a person sought by Interpol had been caught to give the impression that the Turkish military was continuing to fight radical terrorists before the NATO summit in Brussels this week.

An updated Nordic Monitor study indicates that in the last two months prior to the NATO summit, Turkish police have detained at least 85 Islamic State in Iraq and Syria (ISIS) suspects in 12 cities across the country, a higher figure than in previous months. It is also not surprising that the Istanbul police raided a house some 500 meters from the US Consulate General in İstanbul on May 20.

Erdoğan issued a decree on Saturday freezing the assets of several ISIS-linked businesses operating in Turkey upon a request from the US after the US Department of the Treasury’s Office of Foreign Assets Control (OFAC) designated three individuals and one entity in connection with ISIS. The three businessmen are accused of providing financial services through fly-by-night companies.

Last week, Turkey announced that ISIS fugitive Arkan Taha Ahmad, an Iraqi citizen, had been detained in northwestern Bolu province. Ahmad is accused of involvement in the Camp Speicher massacre in 2014. Ahmad was released into house arrest for two months the same day by a local court in Bolu, a measure that is almost never applied to terrorist defendants in the country. Nordic Monitor learned that Ahmet was taken directly to court after being detained at his home without being questioned by the police. The security forces apparently didn’t wonder how he had lived in Turkey unnoticed for so long, and the court didn’t even consider deporting him to Iraq due to a Red Notice out for him. Many Turkish and foreign members of ISIS were smuggled into Turkey following ISIS’s defeats in Iraq and Syria in previous years.

Turkey’s lack of transparency in the fight against radical jihadist groups, particularly against ISIS, is a known fact. Turkish authorities tend to announce the number of detained ISIS suspects following operations that many believe is an inflated figure, and it is not transparently stated how many of them have been arrested or convicted. There is a serious gap between the figures of the interior and justice ministries. After growing criticism, the Interior Ministry, which had published the statistics of terror suspects detained every month since 2017, stopped releasing the figures on its website in 2020.

A Nordic Monitor review of parliamentary records in 2020 shows that a total of 40 written questions out of 43 on ISIS have gone unanswered since December 2016 despite a Turkish law that requires that the government respond to such questions within two weeks. The only answers received provide insignificant details that are not relevant to the crux of the matter, suggesting that the government is deliberately ignoring parliamentary inquiries on ISIS.