Why not recreate the European Community?

Why not recreate the European Community? 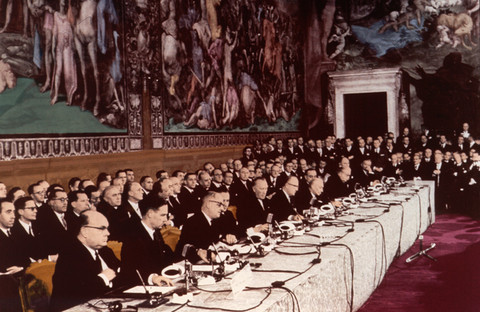 The European Union is facing some fundamental problems that need an rather urgent solution.

Five years after the vote for Brexit, the relations with the UK have gone sour. Everyone knows that the latest so-called sausage war over Northern Ireland will not be the last hick-up in the new post-Brexit relationship.

Switzerland recently blew up its treaty negotiations with the EU, while there are voices in Norway to do the same. Just like with Brexit, that would be detrimental for the population of both countries, rather than for the EU, but it is a bad evolution for all citizens.

Turkey’s EU accession talks are not moving forward, to say the least, while the accession of some Balkan countries are being blocked.

One could cynically say that the accession process has become one in which Turkey pretends to reform the country, while the EU pretends the country will one day become a member state.

And more and more voices are being raised to kick out Hungary of the EU since the country is moving towards an autocracy.

The fact that Hungary is vetoing more and more European decisions is making Europe weaker, not least in its foreign policy.

Time to turn the negative tide

The EU leaders know that the union needs some reforms and therefore created the Conference on the Future of Europe.

However, they said from the outset that there is no room for treaty change. But the question is if a fundamental treaty change is not exactly what the EU needs to get out of the choppy waters?

Is it not time to acknowledge a few new realities and turn some weaknesses into some strengths?

One of those realities is that Hungary is not going to change its policy towards LGBTQI+ minorities, media, or its judiciary.

It is enfeebling the EU, not just internally, but also as a global force supporting democracy and human rights.

The most important weakness of the EU is probably that it is not only extremely difficult to enter as a member-state. It is equally difficult to leave the Union, or be kicked out of it.

Towards a new multispeed Europe

For decades, intellectuals and politicians have been discussing the idea of a multispeed Europe or a Europe of variable geometry.

As a matter of fact, this multispeed Europe already exists.

Only 19 of the 27 EU countries are members of the monetary union and have replaced their national currency by the euro.

The Schengen area of free movement consists of 26 countries. However, Ireland, Romania, Bulgaria, and Cyprus are not part of Schengen, while Switzerland, Norway, Iceland, and Lichtenstein are.

So why not create a new circle of European membership, one that might solve a few problems Europe is facing today?

It should be a circle that gives current non-EU member states a place, without them becoming a full member of the European Union itself.

This circle should be stronger than the European Economic Area, and also more inspirational.

One could argue that the word ‘union’ symbolised more a union of states, while ‘community’ seemed to be more about people.

We could reintroduce the European Community for those countries who want to join the EU, but probably never will.

Turkey is a good example, but not the only one. Morocco wants to become an EU member state since 1987, but was always refused and probably will always be.

Another example is Tunisia. Since 2011 the country is fully democratic, but struggling economically. Tunisia is also looking more in the direction of Europe, then it is looking towards the Arab world.

If we allow countries like Morocco, Tunisia, Turkey, or Georgia to become members of a European Community, this might be a better neighbourhood policy than all other funds and measures combined.

A new European Community might also be a new start for the UK-EU relations.

Everybody knows that both the UK and the EU are deeply connected and interwoven into each other.

It is time to leave the negative Brexit logic behind and start working on a positive story, in which the 50 percent who voted against Brexit and those who are living on the continent might have something to look forward to.

The creation of a new circle might also be an elegant solution for Hungary.

We could see the relationship between the EU and this future European Community as one of percentages.

Once a country like Hungary, or other ones in the future, are falling under the necessary percentage of democracy and rule of law, they automatically fall back into the European Community, and out of the European Union.

The creation of such a European Community might not be the solution that solves all problems, but it might be a positive way out of several deadlocks in which the EU finds itself today and probably for decades to come.