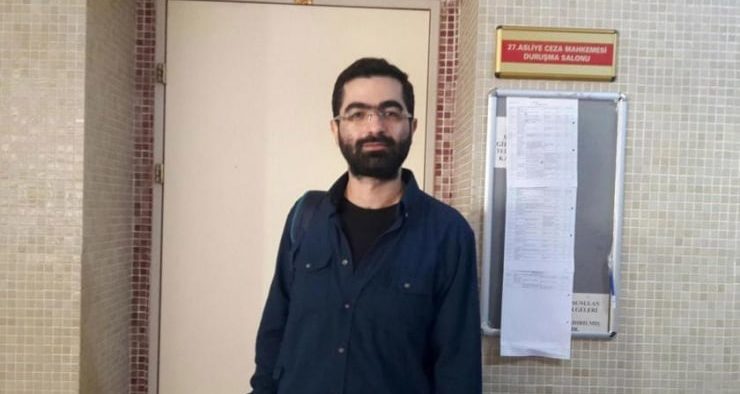 Cem Şimşek, the news editor for the Evrensel daily, was on Thursday convicted on charges of insulting Turkish President  for reporting on cartoons published in German media.

According to Evrensel, Şimşek was given a suspended sentence of 11 months, 20 days. His lawyer, Devrim Avcı, criticized the ruling, saying the report was within the boundaries of freedom of expression and that they would appeal the decision.

“Handing down a prison sentence for [reporting on] cartoons critical of the AKP’s [Turkey’s ruling Justice and Development Party] ISIS policy shows what they are trying to hide today,” Şimşek said. “This sentence is not independent of recent decisions against our daily including content blocking and refusal by public institutions to place ads. In the face of this oppression aimed at suppressing the truth, we will continue our journalistic activities to uncover the truth in the future as we did in the past.”

Turkish journalists are often targeted and jailed for their professional activities. Turkey is one of the world’s biggest jailers of professional journalists and ranked 153rd among 180 countries in terms of press freedom, according to Reporters Without Borders (RSF).

According to the Stockholm Center for Freedom’s “Jailed and Wanted Journalists in Turkey” database, 173 journalists are behind bars in Turkey and 167 are wanted and either in exile or at large.

Thousands of people in Turkey are under investigation, and most of them are under the threat of imprisonment, over alleged insults of President Erdoğan. The insult cases generally stem from social media posts shared by Erdoğan opponents. The Turkish police and judiciary perceive even the most minor criticism of Erdoğan or his government as an insult.

Insulting the president is a crime in Turkey, according to the controversial Article 299 of the Turkish Penal Code (TCK). Whoever insults the president can face up to four years in prison, a sentence that can be increased if the crime was committed through the mass media.