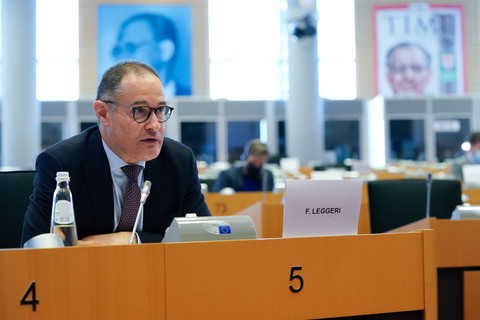 The head of the EU’s border agency Frontex, Fabrice Leggeri, allegedly destroyed incriminating evidence of an illegal pushback by the Greek coast guard.

That finding was part of a final report published on Thursday (15 July) by a group of MEPs probing the Warsaw-based agency.

“This gives us the strong impression that he intended to cover up this clear pushback by the Greek authorities,” said Dutch Green MEP Tineke Strik, and lead author of the report, in an email.

According to the MEPs’ probe, Leggeri instructed his fundamental rights officer “to remove all information gathered” on a Category Four Serious Incident report.

The incident refers to a reported pushback in mid-April last year, documented by investigative outlets such as Germany’s Der Spiegel.

Some 30 migrants and refugees had been towed back into Turkish waters on the night of 18 to 19 April, according to the Spiegel article.

Leggeri had last December, in a debate with the European Parliament, made reference to the April episode.

He said a Frontex surveillance flight had live-streamed the entire event to the agency’s headquarters in Warsaw, where they watched it unfold.

“I reported this because there was a serious incident report and the situation was a little bit strange,” he said, at the time.

He then cited “geopolitical confrontations”, noting Turkey had a few days prior deployed two-F16 fighters into Greek airspace.

“I decided to escalate this suspicious case that we spotted to the Greek minister of maritime affairs,” he added.

He also pointed to EU rules (regulation 656/2014) that allow for authorities to turn back a boat or escort it “outside of, or towards, a destination other than the territorial sea.”

But critics say the rules are being used as a pretext to legalise pushbacks, noting each person must have their individual cases first examined.

It is unclear why Leggeri asked the fundamental rights officer to remove the evidence. The agency has yet to reply, when pressed for a comment.

But the episode points to a host of other problems in the EU’s largest and most well-funded agency, cited by the MEP report.

The report was the culmination of a four-month probe into Frontex, following numerous reports of pushbacks, some of which implicated the agency.

The MEPs were part of the so-called Frontex scrutiny working group, set up in the wake of pushback reports published last October.

Those reports came from a joint-investigation by Bellingcat, Lighthouse Reports, Der Spiegel, ARD and TV Asahi.

The group was tasked to find out if the agency was involved in, aware of, and or had failed to act on, documented fundamental rights violations in Greece.

Frontex and the Greek authorities have consistently denied any wrongdoing.

But the MEPs found Frontex had failed to take its responsibility to protect fundamental rights at Europe’s external borders.

“The agency did not prevent these violations, nor reduce the risk of future fundamental rights violations,” said Strik.

The MEPs did not investigate specific pushback claims, but instead found evidence to support the allegations.

They also faulted Frontex for relying on denials from the Greek government – despite the fact that Athens had not conducted any investigations.

They say the agency’s fundamental rights officer had been ignored over the years.

The same officer had in 2016 recommended Frontex suspend operations in Hungary, following pushbacks back into Serbia.

But Frontex only acted earlier this year, after European Court of Justice in December 2020 condemned Budapest over the pushbacks.

Although Frontex suspended its Hungary operations, it still helps Budapest with returns of unwanted migrants. The MEPs are requesting Frontex to “immediately end all activities in Hungary.”

They also say Greece instructs Frontex to leave an operational area, in order to then carry out a possible push back. The MEPs say Frontex should be allowed full access to all operations.

If Greece or any other EU state refuses, they say, it should be striped of some EU funding.

Show us some LOVE by sharing it

Previous Article
An Alternative History of Islam
Next Article
Lecturer in Politics of the Middle East – SOAS University of London.

Lecturer in Politics of the Middle East – SOAS University of London.
NAT 17th July 2021
Submit an Op-Ed
Tweets by NewsAboutTurke1