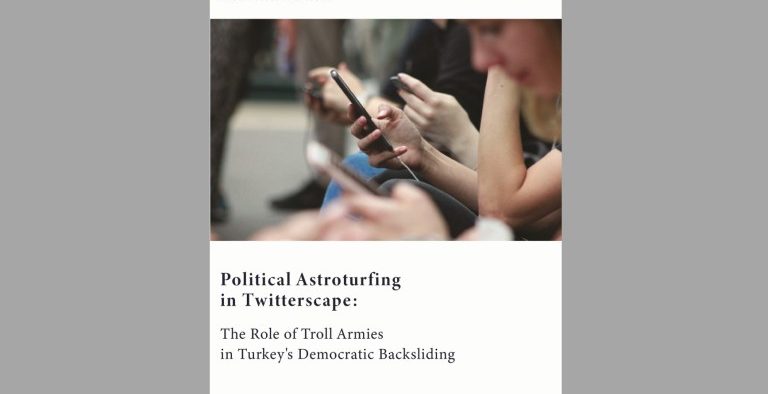 A report by a newly established Washington, D.C., think tank revealed how Turkey’s ruling Justice and Development Party (AKP) established and used an army of Internet trolls to dominate political discourse and set the public agenda on social media, considered the last bastion of silenced opposition groups and human right defenders in the country.

Written by a group of Turkish academics, the report, titled “Political Astroturfing in Twitterscape: The Role of Troll Armies in Turkey’s Democratic Backsliding,” analyzes 6,252 Turkish government-sponsored accounts that were suspended by Twitter in June 2020 for “employing coordinated inauthentic activity, which primarily targeted at domestic audiences within Turkey.”

Using a combination of quantitative and qualitative analyses, the study shows how the AKP attempted to shape the public agenda through political astroturfing campaigns during elections and critical national events such as the Gezi Park protests, the corruption investigations of December 2013 and the abortive putsch of July 2016.

According to the report, the most remarkable method used by the troll accounts in these campaigns was “masquerading as different political identities (or sockpuppet typologies) to disseminate their messages and false information among various segments of Turkish society and across the political spectrum.” Based on self-identifications and the content of the tweets, the study grouped the accounts into four categories: supporter of Turkey’s President Recep Tayyip Erdoğan, Kemalist (those who support the political, economic and social principles advocated by Turkey’s founder Kemal Atatürk), nationalist and pro-Kurdish.

Fahrettin Altun, communications director of the Turkish Presidency, had denied Twitter’s claims, stating that “various documents, which Twitter cited to support its decision … are clearly unscientific, utterly biased and politically motivated.” He had further accused Twitter of supporting terrorism and threatened to block access to the popular social media platform.

On July 29, 2020, a month after Twitter’s decision, the Turkish Parliament passed a social media regulation that forced social media platforms with more than 1 million connections a day to appoint a representative in Turkey with whom the Turkish authorities can resolve problems arising from cases of insult, intimidation and violation of privacy.

The law also obligated social media platforms to respond within 48 hours to complaints about “violations of personal rights” or to judicial orders to remove content. The social network provider that fails to remove offending content within 24 hours after a court ruling is held responsible for damages incurred by the content.

According to the report, besides disseminating false information in favor of the AKP government, the trolls invited their followers to tweet about pre-determined topics so they would be trending across the social media ecosystem; portrayed opposition parties and key figures as allies and apologetic defenders of certain groups (e.g., Kurds, supporters of the Gülen movement (a faith-based group vilified by the Erdoğan government), minorities), who were declared as political outlaws by the government; sought to discredit several legal probes launched into some political officials’ misdeeds (e.g., corruption, bribery, human rights violations); and incited and justified violence, cruelty and injustice against some members of opposition groups.

The study concludes that as the AKP’s popular support falters due to economic woes, social media continues to be an important battleground “where the government and its discontents would contest for the ears, hearts, and minds of the people, each with their own — legal or controversial — means at their disposals.”

The report is the first major study published by the Orion Policy Institute (OPI). In an interview with the Ahval news website’s Nervana Mahmoud, Dr. Süleyman Özeren, a board member at OPI and one of the co-authors of the report, said the institute “will focus on a variety of issues including global security, human rights, and democracy and create policy proposals based on high quality research.” According to Özeren OPI is an independent not for profit organization that operates on voluntary contributions.