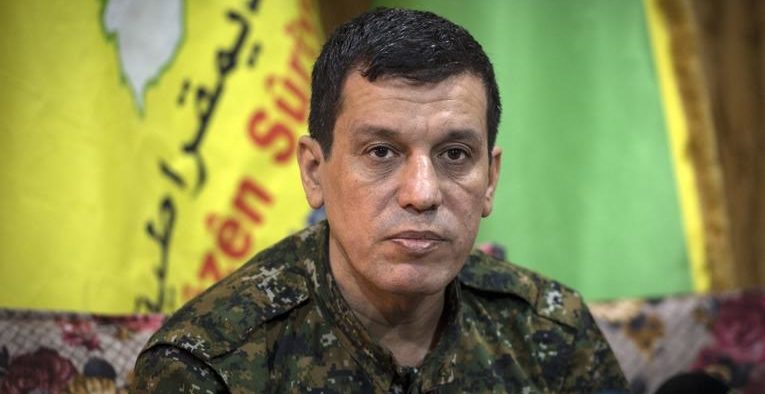 As U.S. forces withdrew from Afghanistan, precipitating the chaotic collapse of its government, another American ally watched warily and hoped that its fate will be different.

The painful memories of an earlier American military drawdown are still fresh for the Kurdish-led Syrian Democratic Forces in northeastern Syria.

President Donald Trump blindsided his generals three years ago by announcing a withdrawal of the 2,000 U.S. troops allied with the SDF in fighting the Islamic State. Though he was later persuaded not to remove the entire force, he did cut it by more than half the following year and, in doing so, cleared the way for the SDF’s adversary, Turkey, to invade part of the territory.

The American move was widely criticized as a betrayal of the Kurds, who had lost thousands of fighters during the campaign against the Islamic State.

“The impact of that will last forever,” Gen. Mazloum Kobane Abdi, the SDF’s top commander and Washington’s strongest ally in Syria, said in a rare interview.

About 900 American troops remain stationed in an expanse of northeastern Syria that lies outside Syrian government control. They are part of the ongoing fight against the Islamist militants, who are estimated by the U.S.-led military coalition to number between 8,000 and 16,000 in Syria and Iraq.

In recent months, the Biden administration has sought to reassure Mazloum and others in the SDF, sending Gen. Kenneth F. McKenzie, who heads U.S. Central Command, and Joey Hood, acting assistant secretary of state for Near Eastern affairs, to the region to talk with them, officials said. The administration has stressed that the partnership with the SDF remains strong and that American troops will not be leaving any time soon, according to SDF and U.S. officials.

Mazloum, who goes by a nom de guerre, struck a cautious but optimistic tone about the future of the U.S. presence here. Describing an improved relationship with Washington in the seven months since President Biden took office, the general said that he expected relative stability to prevail in northeastern Syria “if America keeps its promises.”

“We feel now that we have stronger political and military support, more than we had from the previous administration,” said Mazloum, who was dressed in green and brown fatigues during the interview at a military base earlier this month. “After these pullouts, there were U.S. officials who came to tell us that there will be no changes in Syria.”

U.S. officials describe Mazloum as a steady hand and trusted ally in the fight against the Islamic State. The U.S.-led coalition continues to provide intelligence and carry out airstrikes to support SDF efforts to roll up sleeper cells and target the militant group’s surviving leadership. The coalition also works with the SDF to patrol local oil fields.

The balance of power in Syria’s multisided conflict depends on the American presence. Where U.S. troops retreat, American officials see an opening for the Syrian military or forces from Russia or Turkey to advance. Some U.S. officials have stressed that the American deployment precludes Iranian forces from establishing a “land bridge” that would allow them to more easily supply weapons to their Hezbollah allies in Lebanon.

“It’s about keeping a balance,” said one senior official, speaking on condition of anonymity because he was not authorized to speak with the media.

The partial American withdrawal in 2019 redrew the map of northeast Syria, ceding some territory once patrolled by U.S. forces to a Turkish-backed Syrian militia force and in other places to the Syrian army and its Russian backers.

The American pullback came after Trump gave Turkish President Recep Tayyip Erdogan a green light to send his military deeper into Syria in a bid to clear the area of the SDF. The Turkish government considers that Kurdish-led force to be an affiliate of the militant Kurdistan Workers’ Party, a separatist group inside Turkey that Ankara calls terrorists. Nearly 200,000 civilians who had been living in Syrian areas under SDF control scrambled for safety.

Although the front lines between SDF and Turkish-backed forces are largely quiet for now, cross-border violence can still flare. Earlier this month, shelling blamed on Turkey or its local allied force struck a home in the town of Ain Issa, killing four members of a family, according to doctors and relatives. In her hospital bed last week, Khitam Hilal, one of the survivors, swam between moments of sedated haze and painful clarity.

“They killed my husband,” she said, eyes fixed on the ceiling and full of tears. “What did we do to them?”

“We don’t want our area to become an area of conflict between parties. We call on the other sides not to do these things and escalate,” Mazloum said.

He warned that the Islamic State also remains a threat. In particular, he raised concerns about the security of detention centers holding captured militants. “We have more than 11,000 fighters in these prisons, and the people who are guarding them need to be trained better to deal with them,” the general said, leaning forward as if to underscore the point.

“Sometimes we have riots and people could escape. We need to make sure they’re in safe hands,” he said.

While British funding has paid to expand a facility in Hasakah, most of the makeshift prison facilities across the region are packed and conditions are poor.

“These people are living in schools and other buildings. The facilities are temporary. They’re not safe,” Mazloum said.

Especially pressing is the fate of children who were captured during the battles against the Islamic State and are now held in these detention centers. Many are traumatized. Some have been radicalized. There is only one rehabilitation center in northeast Syria. The SDF, Mazloum said, is calling for foreign help in building at least 12 more.

“There is international support, but it is very slow — and we need it to be very fast,” he said. “We are facing problems and we need major support here. We need people to speak up.”

The Kurdish-led authority that administers the region has also been urging foreign governments to repatriate thousands of their citizens — foreign fighters and their families — who were captured during the war and now languish in prisons and displacement camps in northeastern Syria.

The sprawling and often febrile al-Hol camp, housing tens of thousands of the militants’ relatives, poses one of the biggest challenges. Hard-liners in the camp have murdered other detainees who have tried to distance themselves from the Islamic State. Some of the women in the camp have become the focus of online fundraising efforts by Islamic State sympathizers.

Across northeastern Syria, few believe that U.S. forces will remain indefinitely. After 10 years of war and thousands of troops killed, the SDF and the local authority insist that the resolution of the wider Syrian conflict must include a political settlement recognizing the rights of the region’s predominantly Kurdish population. In recent years, it has gained a measure of long-sought autonomy from the Syrian government.

When asked how he saw the next few years unfolding, Mazloum smiled and picked his words carefully.

“I know that the United States wants their troops here to fight the terrorists, but they need to stay until there is a solution for the Syrian crisis. If we can make this happen. Then the future will be positive in a way,” he said.

Does he think America will?

Mustafa al-Ali in Hasakah and John Hudson in Washington contributed to this report.

Iran, Russia and US adversaries hope US has new ‘Vietnam syndrome’
NAT 1st September 2021
Submit an Op-Ed
Tweets by NewsAboutTurke1