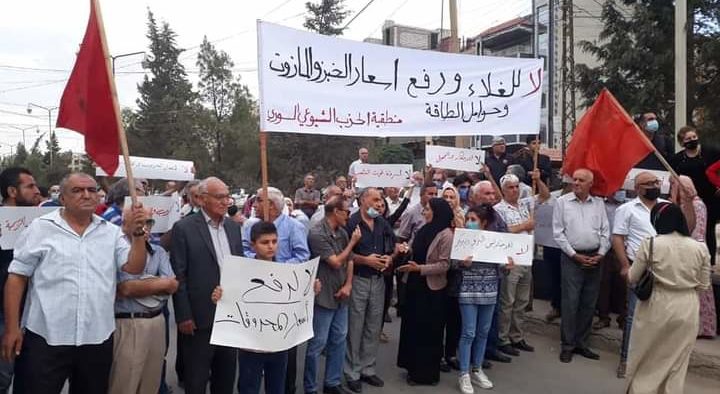 SYRIAN communists joined protests against hikes in fuel and bread prices in the country’s Kurdish-led north-east on Friday as they called for an end to US occupation.

Crowds gathered in front of the United Nations building in Qamishlo as the Syrian Communist Party called for the defence of the national government and an end to economic misery, which it blamed on “mismanagement” by regional officials.

Speakers also denounced “the Turkish and American occupations” of the region which they said were hindering the stability of Syria as it tries to rebuild after more than a decade of war.

The protest was called by the Kurdish National Council (ENKS), an opposition formation dominated by the conservative Syrian franchise of Massoud Barzani’s Kurdistan Democratic Party.

Demonstrations, which were held in at least nine cities, were brought forward from Sunday as authorities announced a new week-long lockdown due to a spike in coronavirus cases.

ENKS has fraught relations with the Democratic Union Party (PYD), which is the main force that governs the semi-autonomous Kurdish enclave known as Rojava or the Autonomous Administration of North East Syria (AANES).

It often seeks to stoke confrontation to undermine the regional authority which it deems to be politically identical to the Kurdistan Workers Party (PKK) which it is engaged in hostilities with in Iraqi Kurdistan.

ENKS is distrusted in the region because of its close links to Turkey, which is carrying out an ethnic cleansing operation in northern Syria with its jihadist allies.

But tensions have been rising in the AANES in recent months regarding price increases on basic goods, which come as the US Caesar Act sanctions begin to bite for ordinary Syrians.

Last December bakeries launched strike action over increased flour prices, refusing to reopen until the autonomous administration either reintroduced the subsidy or allowed them to increase bread prices.

And anger has spilled over regarding a refusal by the PYD to adopt the Damascus curriculum in the regions schools, with Kurdish and Arab families alike expressing concern.

They say that it excludes their children from attending university and further education and their concerns have been echoed by members of the Syriac Orthodox Church committee.

A number of its members were arrested due to their opposition to a directive issued to private schools in the region regarding the imposition of a curriculum which is not recognised by Syria’s education ministry.

But the Kurdish administration insists that pupils have the right to be educated in their own language, meaning the Kurmanji dialect that is spoken in the region.

They say that education in the mother tongue is one of the most important achievements of “the Rojava revolution,” warning of attempts to eradicate Kurdish culture and identity.

ENKS has previously sought to exploit the situation and has blocked attempts to implement the PYD curriculum during intra-Kurdish unity talks, leading to a stalemate.

It opposes the promotion of the ideology of the PKK in schools favouring a curriculum backed by Unicef, including teaching in the Kurdish language.

The PYD and the Syrian Democratic Council were contacted for comment.