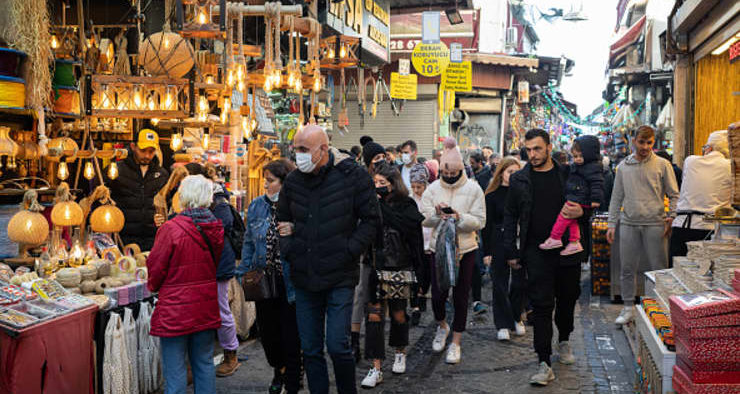 Turkish President Recep Tayyip Erdogan has pledged to bring down his country’s soaring inflation, which hit 36% in December, as the country’s central bank gears up for another rate-setting meeting next week.

Speaking in Parliament on Wednesday, Erdogan said he was protecting the country’s economy from attacks by “foreign financial tools that can disrupt the financial system,” according to a translation by Reuters.

“The swelling inflation is not in line with the realities of our country,” the president added, vowing that recently announced government measures to support the severely weakened lira would soon tame “unjust” price hikes.

Economists commenting on the news were not impressed.

“Foreign institutional investors don’t want to invest in Turkey because of the absolutely crazy monetary policy settings imposed by Erdogan,” he wrote. “There is NO foreign plot.”

Turkey’s lira lost 44% of its value in 2021, due in large part to a refusal by the president — who essentially controls the levers of the Turkish central bank — to raise interest rates to rein in inflation. And Turks themselves are looking beyond the lira as they lose hope in their own currency: Turkish stores are now starting to display prices in U.S. dollars, and Turks are putting their money into cryptocurrencies like bitcoin and ether.Turkey’s economy could come down with a ‘big bang’, says asset management firm

“If RTE [Recep Tayyip Erdogan] wants to save the lira, and maybe his own skin, he should adopt a USD-based currency board,” Steve Hanke, an economist at Johns Hopkins University, wrote on Twitter on Wednesday, saying Turkey is “spontaneously dollarizing.”

His tweet featured an article by Israeli daily Haaretz entitled “Even the Turkish Lira stopped believing in Erdogan.”

An avowed opponent of interest rates, Erdogan instead outlined an alternative set of measures to bolster the lira. The plan essentially entails protecting local depositors against market volatility by paying them the difference if the lira’s decline against hard currencies surpass banks’ interest rates.

Critics say this plan is unsustainable, and is essentially one large hidden interest rate hike. And central bank reserves are already falling: Central bank gross reserves decreased by $1.6 billion to $109.4 billion in the first week of January, according to Goldman Sachs, “driven by the decline in foreign currency reserves which stood at US$71.0 billion.”

The state’s currency interventions, spending dollars to buy lira in order to stabilize it, have been costly.

The lira appeared to be in free fall in mid-December, dropping as low as 18 to the dollar before the government announced its rescue plan. The intervention has managed to bring the currency back to just under 14 to the dollar and keep stable there for the past week, though that’s a dramatic fall from its level of 7 to the dollar just one year ago.

“But we doubt that this strength will last for much longer as the more pernicious effects created by very large falls in the lira in December filter through,” Tuvey added.

“While export sectors may hold up well, consumer-led ones will suffer amid a surge in inflation, which hit 36.1% y/y in December and is set to rise further.”

How long can this last?

Analysts estimate Turkey’s short-term debt to be just above $180 billion, with a current account deficit of around $10-$20 billion, leaving gross external financing requirements at around $200 billion. With central bank gross reserves at about $109 billion and likely to keep dropping with dollarization, spending to support the lira and potential further foreign capital flight, financing for that currency reserve coverage does not look very strong.

So how long can the central bank keep intervening to prop up the lira? “The answer is not very long if it continues to keep up the pace of intervention seen in December, which remember only held the lira flat over the month,” Ash wrote.

Meanwhile, Erdogan continues to push his own economic theories, insisting Wednesday that the link between interest rates and inflation have long been disregarded in some other countries — a comment that some critics have noted would liken Turkey to Argentina, Venezuela or Iran in terms of monetary policy.

“I worry about the messaging now to foreign investors,” Ash wrote.

“Erdogan is telling the world that Turkey does not need foreign capital, foreign portfolio investors are not welcome and Turks can finance their own economy. His economic policy mantra is already not liked … Investors I think are asking themselves why they should continue to finance bad policies from the Erdogan administration? Will any new issue money just disappear in ineffective and idiotic FX intervention, and is Turkey heading to a systemic crisis?”

Previous Article
Most applicants sought right to a fair trial at top court in 2021, chief justice says
Next Article
Turkey is committed to its goal of EU membership: Erdogan

Turkey is committed to its goal of EU membership: Erdogan
NAT 14th January 2022
Submit an Op-Ed
Tweets by NewsAboutTurke1