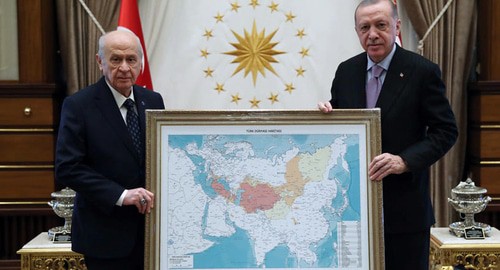 The 21st century will be the Turkish century and the Turkish world. Turkey’s Daily Sabah quoted the Turkish president not long ago as saying that the concerns of neighbors and international powers about Ankara’s ambition were not unprovoked. Turkish President Recep Tayyip Erdogan recently hosted a meeting of Turkish-speaking countries known as the Council of Turkish States. He attempted to further expand Turkey’s influence in Central Asia and the Caucasus by proving the organization’s leadership’s leadership claims, formerly known as the Turkish Cooperation Council.

A few days later, the government of Bahçeli, the leader of Turkey’s Nationalist Movement Party, presented Turkish President Recep Tayyip Erdogan with a map of the “Turkish world,” on which he had drawn territory for other Turkic-speaking countries of Turkic and Muslim minorities.

Since the protests and demonstrations took place in Kazakhstan, the whole idea of being part of a “Turkish” world faced some serious questions. It is not the first time Turkey is trying to increase their influence by creating Turkish identity discourse to follow the Turkization project. During the recent conflict between Armenia-Azerbaijan, it was clear that Erdogan was after this idea to export it to legitimize their help to Azerbaijan during the war. However, Erdogan being ambitious to expand the idea has touched Iranians in the west north of Iran, who are not event Turk but speak the Turkish language. Many believe this policy should be understood as the neo-ottoman policy he is after. There are many differences between the ottoman ideology and the Turkish world. Traditionally, the ottoman empire was based in the middle east countries and north Africa, where the Turkish language/identity is the least common among them.

Following the Nagorno-Karabakh war, the Turkish world has gained considerable confidence. It is attacking its neighbors from a top-down position, focusing on Turkey and the Republic of Azerbaijan. Following its failures in Syria, Libya, and Greece, Turkey shifted its focus to the Caucasus, where it has had some success. With Turkey’s presence, significant projects such as the Zangzor Corridor and energy transfer projects in the Caspian Basin and the second phase of “Shah Deniz” can now impact the region’s geopolitics and geoeconomics.

Historically, Kazakhstan is where Turks and Turkish identity is almost dominant. After communism took place in Russia, the whole region became part of the soviet unions. Therefore, the two main factors in Russian authoritarian political culture with Turkish majority identity should be considered. Protests started when Tokayev’s government decided to increase the price of fuel. Soon, it turned out as a political demonstration against the whole system.

One of Erdogan’s strategies is to be opportunistic whenever there is a crisis and increase his influence. For instance, he did the same thing when the Syrian civil war began. By supporting Islamic extremism such as ISIS in Syria, on the one hand, he had an excuse to send troops to Syria in the name of fighting them, and on the other, he could suppress Kurds between two borders.

When the demonstrations started in Kazakhstan, Erdogan started sending strong signals that this country was essential. Indeed, it is true that Kazakhstan is a strategic country for turkey in energy securities and the connection from China to turkey. Nevertheless, the idea of being a part of the Turkish world is highlighted. However, we should not forget that Kazakhstan is one of The Organization of Turkic members. The Organization of Turkic States, formerly known as the Turkic Council or the Cooperation Council of Turkic Speaking States, is an international organization of prominent independent Turkic countries Azerbaijan, Kazakhstan, Kyrgyzstan, Turkey, and Uzbekistan.

Also, Kazakhstan is one of the prominent members of the Collective Security Treaty Organization with Russia. Erdogan was trying to support the demonstrations and argue that Turks in Kazakhstan wanted their political rights. Russia sees it as an ex-soviet country where keeping it under the influence is vital.

There was a possibility that Kazakhstan could become a battlefield between Russia, Turkey, and western countries. Although, by sending heavy troops, Putin showed everyone that Kazakhstan is not Ukraine and will not let any third country increase its influence. One of Erdogan’s Turkish policies is to use his foreign policy cards to solve his problems with the powers. For example, it attempts to apply it to Syria or the South Caucasus by escalating the Russian-Ukrainian conflict. According to this point of view, Erdogan’s weight in the Turkish world can be significant because he can use it to regulate his relations with Europe and even save the country from the high level of tension with the situation surrounding Iran and Russia-US.

Also, on the news (mostly on Twitter), some of the terror organizations who tried to increase the violence in Almaty a few days before the demonstrations had a flight to Turkey to meet with the Turkish inelegancy service.

None of these could give turkey what they were looking for in Kazakhstan. It means they lost the game to Russia, and if the situation becomes quieter, Russia may start a new counter policy against Turkization of the region.

The Organization of Turkish States, the practical arm of Erdogan’s “Turkish World” plan, is an uncoordinated, heterogeneous group with no common goal or strategy. These countries have many political differences, but they have also performed poorly in public diplomacy and public relations. Other countries have almost no proper public relations, except Azerbaijan, which has expanded social and cultural cooperation with Turkey in the last year. Of course, it should not be forgotten that there is a high-level and humiliating look at the Turks of the Caucasus and Central Asia at the Turkish community level, and the member states of this organization are aware of this. Many countries in these two regions have far stronger cultural and historical ties with Iran and Russia than Turkey.

To sum up, turkey’s idea about the Turkish world should be considered a security issue for all countries in Central Asia and Caucasian states Russia and Iran. Also, as a middle eastern country with security interests such as energy, politics, and Turkish language speaking, Iran needs to take severe diplomatic actions against it.

News about Turkey offers readers different points of view. The opinion expressed in this text is not necessarily shared by the editors of NAT.