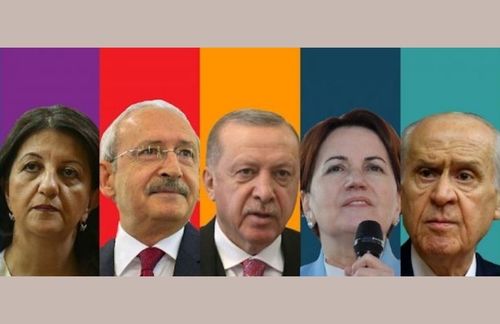 The Avrasya Public Opinion Research Center has shared the results of its politics survey conducted in January 2022. The results of the survey participated by 2,460 people froom 26 provinces have shown that 82.3 percent of the population feel that they are getting poorer.

In response to a question on whether they would support a decision to hold snap elections in Turkey, 62.1 percent answered in the affirmative while 20.5 percent said no and 17.4 percent “had no idea”.

Without distributing the flying votes, the voting rates of the parties would be as follows in the event of a snap election in the country:

When the flying votes are distributed, the rates stand at;

Trust in the opposition?

When asked about how successful they find the opposition, 39 percent said that they find it successful while 42.9 percent find it unsuccessful. 18.1 percent of the respondents find it partly successful.

When all voters were asked, “Which parties would receive the most votes in your family / friend / work circles and neighborhood if Parliamentary elections were held today”, 64.3 percent opted for the opposition parties while 31.2 opted for parties in the ruling alliance.

When the same question was asked for the Presidential elections, 48.2 percent of respondents opted for a candidate to be nominated by opposition parties while 39.1 percent opted for the ruling parties.

According to the survey results, 72.3 percent are of the opinion that the votes of the ruling People’s Alliance have dropped when compared to the last Parliamentary elections. While 2.5 percent think that its votes have increased, 25.2 percent say that they have not changed.

The survey results have shown that in the event of main opposition CHP Chair Kemal Kılıçdaroğlu being nominated as the joint candidate of the opposition parties, 39.9 percent would vote for him while 38.1 percent would opt for AKP Chair and President Recep Tayyip Erdoğan.

As a joint candidate of the opposition, 43.3 percent would support İstanbul Metropolitan Mayor Ekrem İmamoğlu from the CHP, against whom President Erdoğan would get 37.1 percent of the votes. As a joint candidate, 43 percent say that they would vote for Ankara Metropolitan Mayor Mansur Yavaş from the CHP. In this case, Erdoğan would receive 36.5 percent of the votes, according to the survey results. (AEK/SD)