4,500 hectares of forest burned in wildfires in Marmaris

4,500 hectares of forest burned in wildfires in Marmaris 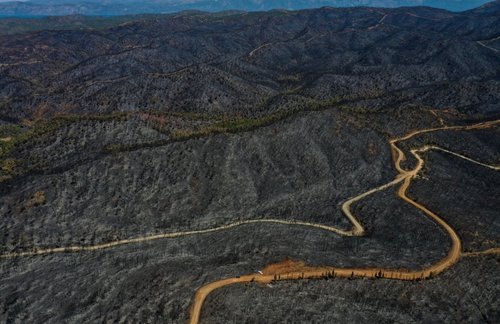 The forest fires that broke out on June 21 in the Marmaris district of Muğla were brought under control on Saturday (June 25) morning. The fire that spread to Uzunöz, Kürardı, and Yeşilbelde locations after it started in the Bördübet region lasted for 4 days.

Efforts to cool down the burned red pine tree forests continued from the air and land since the early hours of the morning today (June 27) on an area of ​​​​4 thousand 500 hectares.

One person was arrested

Sacit Ayhan, a local, who was detained for allegedly starting the forest fire, was arrested in the courthouse.

“Helicopters started when the fire approached the Palace”

Deputy Erbay stated that a fire extinguishing fleet should be established, forest roads and safety lanes should be opened, and fire pools should be created:

“Extensive planning is required. We have said it many times after the disaster we experienced last year, but the government did not listen to us. We proved once again that we were correct with our warnings.”

Erbay also spoke about his claims about the summer palace of Erdoğan:

“When the forest fire headed towards the President’s summer palace in Okluk Bay, helicopters started to intervene in the fire. These efforts were not for the forests of the country but were made for the palace. It was made clear that our forests, which are the national treasure of our country, are not as valuable as the palaces.”