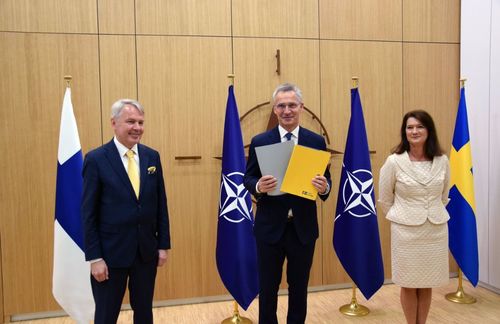 Ankara will follow Sweden and Finland closely and will not ratify their accession to NATO unless they take steps to meet Turkey’s demand for the extradition of people it calls “terrorists” under a deal signed in June, Turkey’s Justice Minister Bekir Bozdağ said in a Thursday interview with the Türkiye daily.

Sweden and Finland applied for NATO membership in response to Russia’s invasion of Ukraine but were faced with opposition from Turkey, which accused the Nordic countries of imposing arms embargoes on Ankara and supporting groups it deems terrorists.

In an agreement signed by Stockholm and Helsinki at the NATO summit in Madrid on June 28, the two Nordic countries agreed to examine Turkish extradition requests for political dissidents who are considered “terrorists” by Turkey “expeditiously and thoroughly.”

“Turkey had previously made demands for 33 terrorists. We have renewed some of these requests and sent them new ones, but so far, we have not received any response from the officials,” Bozdağ was quoted as saying.

There are conflicting figures about the number of people whose extradition Turkey is seeking from Sweden and Finland.

In a statement to the Swedish TT News Agency in July, Foreign Minister Ann Linde said Turkey had sought the extradition of 16 Turkish citizens from Sweden since 2019 but had to withdraw nine of its requests because those individuals did not live in Sweden. Linde also said while Swedish courts refused to extradite four people, three others were extradited to Turkey.

Yet Turkish President Recep Tayyip Erdoğan said at the end of the NATO summit on June 30 that Sweden had made a “promise” to extradite “73 terrorists” and threatened to block NATO membership if the commitments were not met. Before this statement, there was only talk of the extradition of 33 people.

“We will follow the governments of Sweden and Finland in this process. If they keep their promises, then great,” Bozdağ said.

Swedish Prime Minister Magdalena Andersson previously said Sweden would continue to respect national and international laws, no Swedish nationals would be extradited and that the decision would be up to independent authorities and courts.

Turkey demands the extradition of people including some journalists and writers who allegedly have links to the outlawed Kurdistan Workers’ Party (PKK) or the Gülen movement.

The Turkish government labels the faith-based Gülen movement as a terrorist organization and accuses it of masterminding a failed coup in July 2016. The movement strongly denies involvement in the coup attempt or any terrorist activity.

The PKK is listed as a terrorist organization by Turkey and its Western allies.

On Wednesday the US Senate ratified the entry of Sweden and Finland to NATO, strongly backing the expansion of the transatlantic alliance in the face of Russia’s invasion of Ukraine, Agence France-Presse reported.

The Senate voted 95 to 1 in favor of the two Nordic countries’ accession, making the United States the 23rd of the 30 NATO countries to formally endorse it so far, after Italy approved it earlier Wednesday and France on Tuesday.

“This historic vote sends an important signal of the sustained, bipartisan US commitment to NATO, and to ensuring our Alliance is prepared to meet the challenges of today and tomorrow,” Biden said in a statement.

The sole opponent was Republican Josh Hawley, who agreed that the United States should focus on protecting its homeland, but that Washington should concentrate on the challenge from China rather than Europe.

One senator, Republican Rand Paul, voted “present” rather than endorsing or opposing the motion.

Senate leader Chuck Schumer said it was a signal of Western unity after Moscow launched a war on Ukraine on February 24.

“This is important substantively and as a signal to Russia: they cannot intimidate America or Europe,” Schumer said.

“Putin has tried to use his war in Ukraine to divide the West. Instead, today’s vote shows our alliance is stronger than ever,” he said.

All 30 members of the North Atlantic Treaty Organization must agree if Finland and Sweden, officially non-aligned but longtime adjunct partners of the alliance, are admitted.

According to a NATO list, seven member countries have yet to formally agree to the new double-entry: the Czech Republic, Greece, Hungary, Portugal, Slovakia, Spain and Turkey.