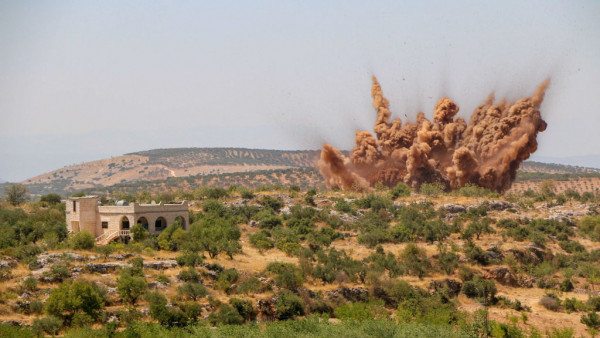 The Turkish government has stepped up its lethal drone attacks against U.S.-allied Kurdish forces in northern Syria ahead of a threatened full-scale invasion.

On Sunday, a Turkish drone attack was reported to have killed 4 people in a town on the Syria-Turkey border.

The latest attack drew criticism from the Syrian Defense Forces (SDF), a U.S. allied force that helped defeat ISIS. The force is predominantly made up of Kurds. According to local reports, the SDF blamed both Russia and the U.S. for allowing the attacks and stated that the Turks would not have been able to launch them without U.S. and Russian permission.

“From July 20, we have had nine people killed from the Syrian Defense Forces (SDF), 13 civilians, and four from internal security forces. All targeted with Turkish drones,” Sinam Mohamad, who is the representative of the Syrian Democratic Council (SDC) to the U.S.

Mohamad told Fox News Digital that: “Turkey is threatening to invade militarily. They are using drone attacks. Now it has increased.”

Last week in a joint statement after a four-hour meeting between Turkey’s President Recep Tayyip Erdogan and Russian President Vladimir Putin in Sochi, the two strongmen “reaffirmed their determination to act in coordination and solidarity in the fight against all terrorists organizations” in Syria.

The opaque joint statement did not reference Russian flexibility about permitting a high-intensity Turkish military invasion into Syria.

Dmitri Peskov, Vladimir Putin’s spokesman, said, according to the Interfax news agency, “Military-technical cooperation between the two countries is permanently on the agenda, and the very fact that our interaction is developing in this sensitive sphere shows that, on the whole, the entire range of our interrelations is at a very high level.”

Russia’s military presence, including its air power in Syria, have complicated Erdogan’s burning desire to invade Syria and create a buffer zone along the Turkish-Syrian border. https://c936f2e51e42a9e7a570b9362322cfda.safeframe.googlesyndication.com/safeframe/1-0-38/html/container.html

Erdogan claims the Kurdish forces in northern Syria who aided the U.S in ousting ISIS are affiliated with the Kurdistan Worker’s Party (PKK) in Turkey. Turkey has classified the PKK a terrorist entity. The U.S. sharply disagrees with Turkey about the SDF and values its Syrian Kurdish allies.

The official Twitter account for U.S. Central Command (CENTCOM) mourned the loss of Salwa Yusku, a deputy commander of the Syrian Democratic Forces, who was killed by a Turkish drone on July 22.

U.S. Central Command tweeted” Salwa was a critical SDF leader who led forces in combat vs ISIS since the height of the fight to defeat the vile ideology in NE Syria in 2017. CENTCOM extends our condolences to the Families of these 3 SDF fighters, the people in Northeast Syria & our SDF partners.”

American officials and veteran observers of the SDF have noted that Salwa played a key role in saving American lives during the war against ISIS.

Mohamad flatly denied any links to the PKK. “Accusing these people of being PKK or terrorists is not true. They were defending the Syrian people from the terrorist group the Islamic State.”

A representative for Turkey’s embassy in Washington, D.C., told Fox News Digital “It is important to note that the PKK/YPG attacks emanating from north of Syria against Turkey and civilian targets have surpassed 1,800 over the last two years. This group leverages its presence in locations near the Turkish border to launch drone attacks on Turkish territory. It also excavates tunnels under the Turkish border to launch attacks.”

The YPG is abbreviation for the People’s Defense Units, a Syrian Kurdish militia.

Mohamad said the political parties of Syrian Democratic Council wants the U.S. to impose a no-fly zone over northern Syria to stop Erdogan’s intensive drone attacks and warplanes. The U.S. rejected the idea.

A Bayraktar TB2 unmanned combat aerial vehicle is seen during a demonstration flight at Teknofest aerospace and technology festival in Baku, Azerbaijan, on May 27. (Reuters)

Mohamad noted that one proposal that appears to be gaining steam is an amendment to a congressional bill that would ban Turkey from using American F-16 fighter planes against U.S. partners in counter-terrorism.

The proposed legislation could be applied to stymie Erdogan’s efforts to use American military air power to launch attacks against the SDF.

Mohamad, who is from the northern Syria city of Afrin, said Erdogan “used airpower” to bring about “ethnic cleansing” in Afrin in 2018. Turkey captured the city four years ago, ousting the Syrian Kurdish militia YPG.

Mohamad said military groups backed by Turkey raped Kurdish women and confiscated the property of Kurds. Turkey’s demographic objective according to Mohamad,” is to replace the Kurdish population with other people who are not from the region.”

Syrian couple Mohamad Ali Rashid, 64, and Madina Abdallah Hussein, 59, both injured during Turkish shelling, sit on May 25, 2018 in the town of Qamishli after they were displaced from the town of Rajo in the Afrin District. – Seven years of war and massive displacement have redrawn Syria’s demographic map, erecting borders between the country’s ethnic, religious, and political communities that will be hard to erase. Displaced Syrians, analysts, and rights defenders have described to AFP a divided country where regime opponents have been driven out, minorities stick closer together and communities generally have become more homogenous. ((Photo by: DELIL SOULEIMAN/AFP via Getty Images))

She said “There was a mass demography change in Afrin and the majority of Kurds (300,000) were displaced, as well as Arabs.”

In 2018, Redur Xelil, the head of foreign relations for the SDF, told Reuters “The Turkish government is settling Turkmen and Arab families in the villages of Afrin that it occupied after forcing out its people and is distributing the belongings of the people of Afrin to the new settlers.”

In 2020 Michelle Bachelet, the U.N’s human rights chief urged Turkey to launch what she said should be “an impartial, transparent, and independent investigation into the incidents,” which the UN had verified” and said that it should “hold accountable those responsible for what may, in some instances, amount to crimes under international law, including war crimes.”

The Turkish embassy representative told Fox News Digital, “The PKK/YPG’s operation manual relies on terrorism and black propaganda” against Turkey. He said, “In that regard, the allegations of ‘ethnic cleansing of Kurds’ is utterly false.” He said Turkey fights against “the terrorist organizations PKK/YPG, not against the Kurds.”

The Turkish representative concluded that “Continuous ignorance of our calls and ensuing appeasement of PKK/YPG terror elements in Syria have resulted in the resurgence of DAESH [Islamic State].”